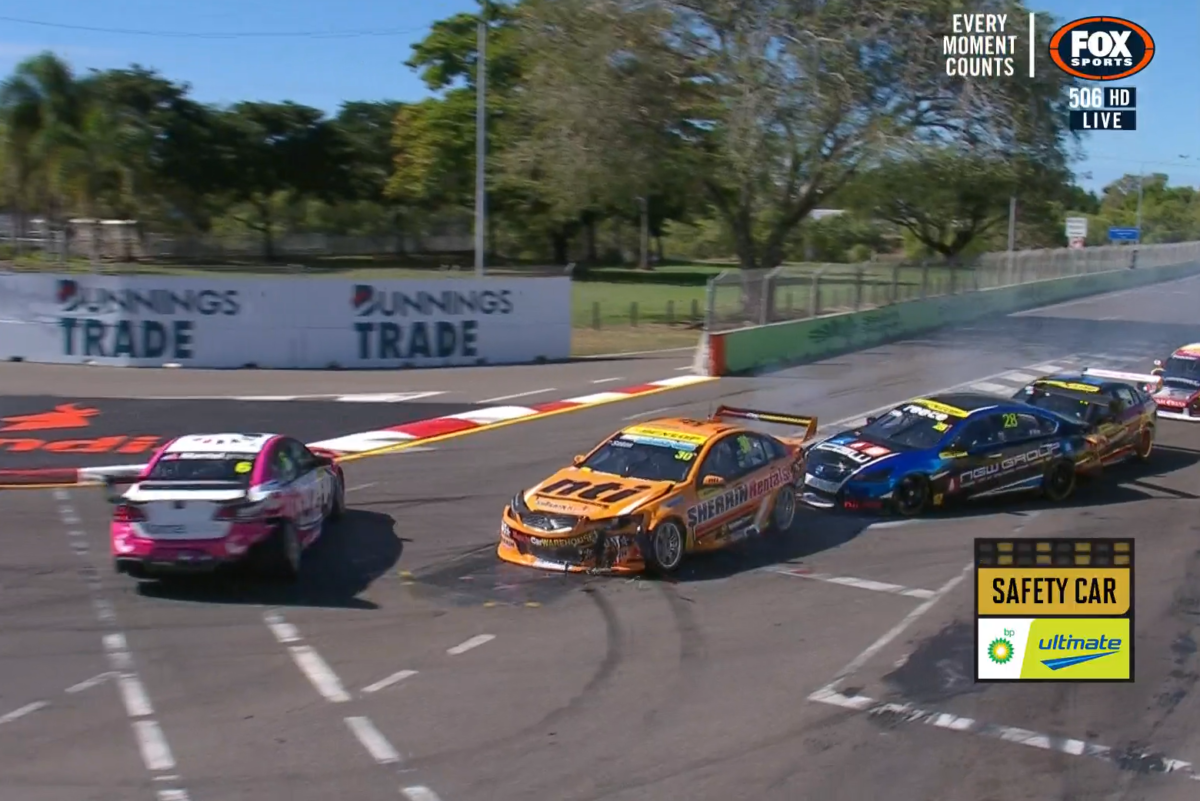 Aaron Seton has been penalised 25 series points after taking out Angelo Mouzouris in Race 2 of Round 2 of the Dunlop Super2 Series in Townsville.

The Matt Stone Racing driver locked up at Turn 2 on Lap 2 and careered into Mouzouris from two cars back, sending the latter’s Triple Eight VF Commodore spinning.

Seton was out on the spot while the driver on the receiving end proceeded no further than back to pit lane with terminal rear suspension damage.

“Following a review of the Broadcast footage, the Stewards in consultation with the DRD and DSA determined Car 30, Aaron Seaton [sic] in breach of Schedule B2 – Article 2.1.1 Careless Driving,” read the stewards report.

“The Stewards imposed a penalty of Loss of 25 Driver Championship Points on Car 30.”

“It was obviously surprising, or quite a fright, actually,” said Mouzouris after he got back to the lane.

“We were halfway through the corner into Turn 2, made up a couple of positions in the first couple of laps, which was awesome, but nothing I could have done.

“Unfortunately, the car wasn’t able to finish, just from the damage that was sustained, but yeah, move on.”

Glenn Seton, Aaron’s father and an engineer in MSR’s Super2 and Super3 programmes, observed, “It looks like he’s just gone down there too deep and tried to defend a little bit to the guy behind because naturally that’s what you do on your first lap, you try and protect your spot.

“He’s just got up over the middle of the road which has got a bit of a hump and got on the brake and locked the front inside brake because it’s on the other side of the road.

“Once you lock a front, you’re a passenger, because you’re carrying so much momentum. With the brakes locked, you just can’t do anything.

Image Racing’s Jordan Boys was also pinged by officials, for the contact he made with Tyler Everingham in passing the #27 Nissan Altima on Lap 10.

The five-second time penalty relegates Car #49 from fourth at the chequered flag to fifth, behind Tickford Racing’s Zak Best, while Everingham remains sixth.

The latter had received a touch from Boys at Turn 2, leading to a change for fifth position at the other end of Charters Towers Road.

“Following a request for an investigation from MW Motorsport alleging Car 49 made contact with Car 27 on Lap 10 at Turn 2 resulting in loss of a position by Car 27,” stewards advised.

“The Stewards imposed a Post-Race Time penalty of 5 seconds on Car 49.”

Best remains second in the series points at a reduced, 42-point deficit to Triple Eight Race Engineering’s Broc Feeney, who dominated Round 2, while Boys continues to hold eighth.

Zane Morse was also a victim of the Seton-Mouzouris incident, shunting Josh Fife’s Altima when the MW Motorsport driver checked up behind Car #30 and ultimately retiring his VF Commodore.

Round 3 of the Super2 Series supports the WD-40 Townsville SuperSprint next weekend (July 17-18).