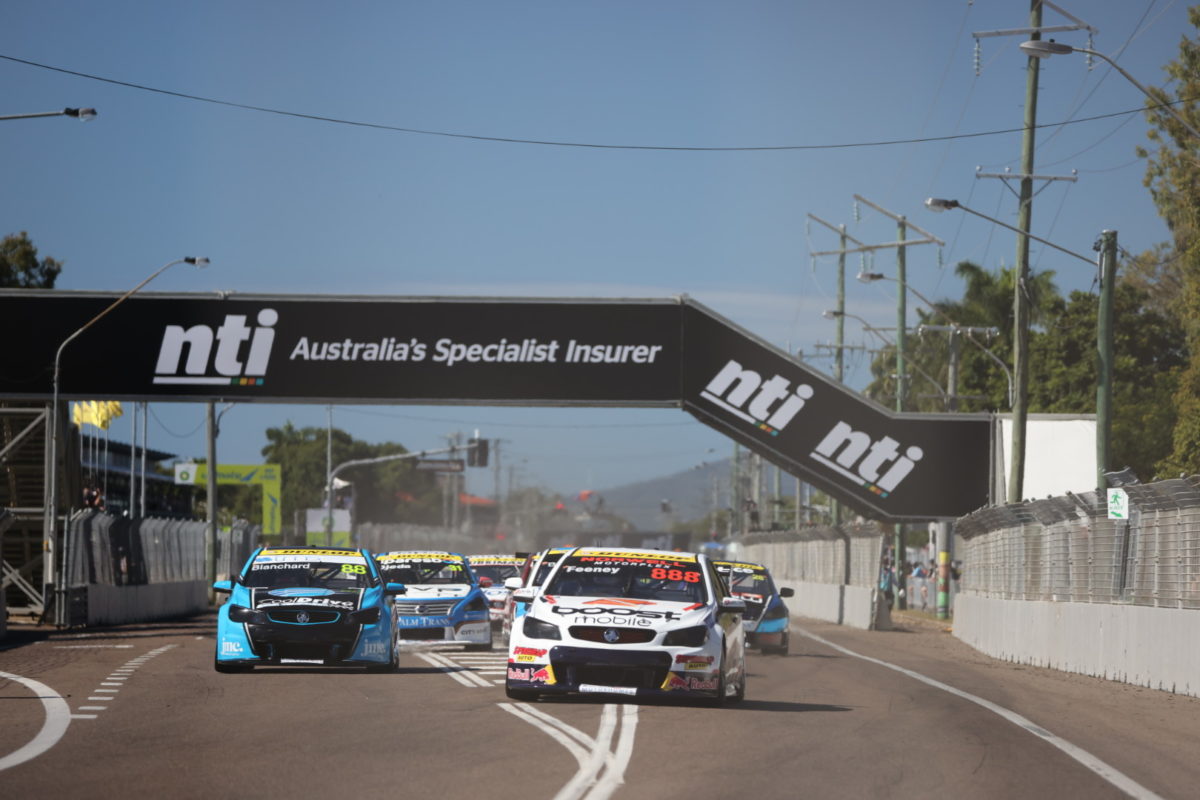 Triple Eight Race Engineering’s Broc Feeney has completed a sweep of Round 2 of the Dunlop Super2 Series at the NTI Townsville 500.

The 18-year-old not only won both races around the Reid Park Street Circuit, but topped all six sessions which were held over the course of the weekend and now leads the series by 51 points.

Despite two Safety Car periods in a contest shortened to 16 laps from a scheduled 21, Feeney won Race 2 by a margin of 5.0440s over Eggleston Motorsport’s Tim Blanchard.

MW Motorsport’s Jayden Ojeda took third while Angelo Mouzouris, in the other Triple Eight entry, was one of four non-finishers after being taken out by Matt Stone Racing’s Aaron Seton.

“What a weekend,” exclaimed Feeney, post-race.

“I just can’t thank my team enough. I dream of this stuff, you know? The red number [denoting series leader] went on this morning, I was so excited.

“It’s literally what I have been dreaming of for the past couple of years and a cleans weep this weekend… Every session, we have been on top, and the pace in this car is unbelievable.

“I can’t wait to come back here next weekend. I’ve got a few little things I can tune up myself and hopefully we can make it another good weekend next time.”

The field had to be sent for an extra formation lap after Super3 driver Chris Smerdon (#39 Matt Stone Racing FG Falcon) was late to leave the grid due to a flat battery.

Jordan Boys (#49 Image Racing VF Commodore) did likewise at Turn 11 to claim sixth, and Matt McLean (#54 Eggleston VF Commodore) was able to drive through the gap which he made.

Feeney was already 1.6s to the good at the end of the standing lap as Ojeda applied the pressure to Blanchard, but the race was soon brought under Safety Car for a big crunch at Turn 2.

That was Seton locking up and nailing the #6 VF Commodore of Mouzouris, who had been running ninth, from a way back.

The #30 VF Commodore had to be recovered while Mouzouris pitted with rear suspension damage, with the matter going to a post-race investigation.

Zane Morse (#11 Zane Morse VF Commodore) was also a victim of the incident, retiring with a bruised front end due to the concertina which ensued.

A restart came on Lap 6 and Ojeda dived down the inside of Blanchard at Turn 11, but could not make the pass stick.

The youngster continued to attack the Super2 returnee and while that allowed Feeney to skip almost 2.8s clear, another Safety Car on Lap 8 wiped out most of Car #888’s lead again.

The neutralisation was to clear Car #39, which had stopped again, before the race went green on Lap 10.

Ojeda continued to try and find a way by Blanchard but no one was getting anywhere near Feeney, who was 1.5s ahead just one lap after the restart.

Car #888 continued to gallop up the road, while Blanchard saw off Ojeda to take the chequered flag 1.6687s ahead of the #31 Altima.

A number of willing stoushes unfolded behind them in the final seven laps, with Boys profiting the most.

He nabbed fifth from Everingham as they ran up Charters Towers Road (Turn 2 to Turn 3) on the restart lap, then went underneath Best on Lap 12 at Turn 2.

McLean was making a habit of following Boys whenever the Image driver made room with a pass, but ended up back in a big battle with Chahda, among others.

Ultimately, Boys claimed fourth while Best retained second in the series with a race result of fifth.

Everingham was classified sixth, ahead of Declan Fraser (#777 MWM Nissan Altima) and McLean, the latter of whom was top rookie for the round again.

A couple of late lock-ups saw Chahda slip to 11th at the chequers, ahead of Josh Fife (#28 MWM Nissan Altima).

Super2 and Super3 are back on the support card when the WD-40 Townsville SuperSprint takes place next weekend (July 17-18).