Van Gisbergen, Whincup ‘almost killed each other’ in Race 15 battle

Van Gisbergen, Whincup ‘almost killed each other’ in Race 15 battle 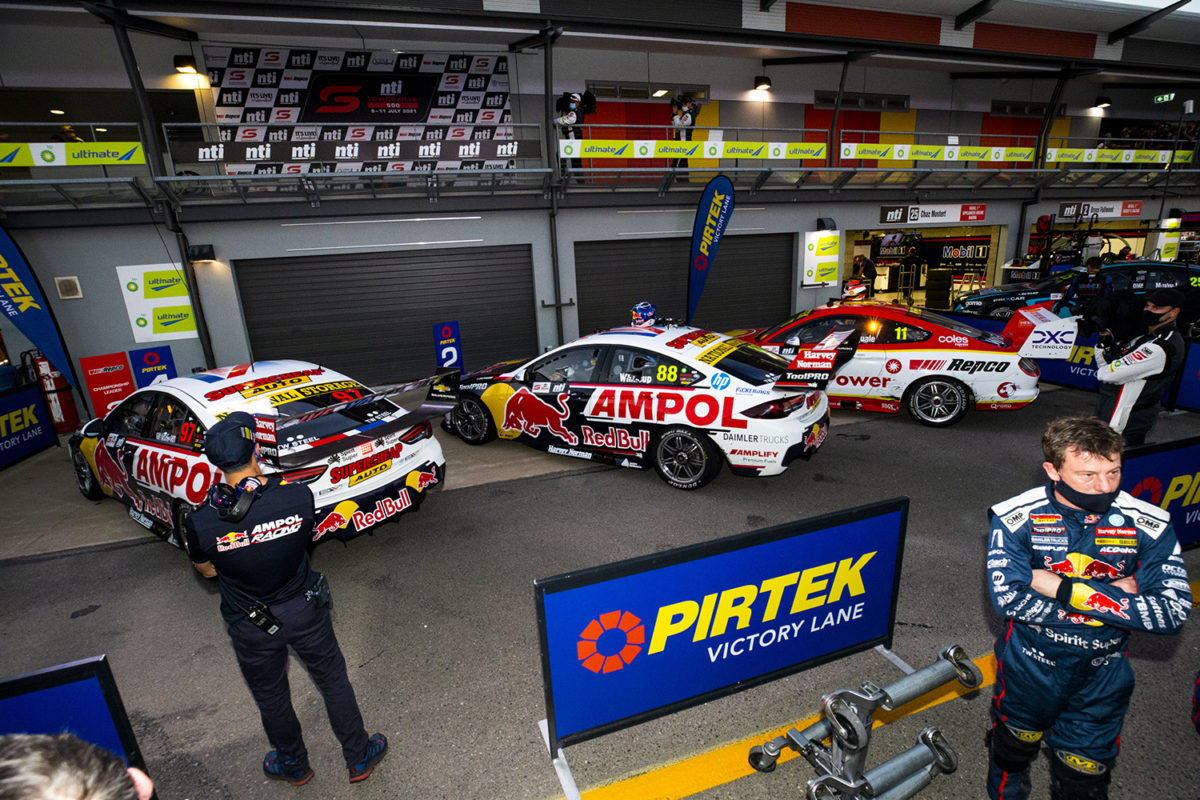 Jamie Whincup has quipped that he and Shane van Gisbergen “almost killed each other” in their battle on the way to a Triple Eight one-two in Race 15 in Townsville.

Van Gisbergen won by seven seconds but the other podium finisher, the Shell V-Power Racing Team’s Anton De Pasquale, was 30 seconds further behind at the chequered flag after 87 laps.

After Whincup got the jump on his pole-sitting team-mate from the outside of the front row, the Red Bull Ampol Racing drivers fought hard, although not necessarily in direct combat, until the decisive pass came on Lap 70.

He said post-race that it was important to put on a show for the spectators at the NTI Townsville 500 and the viewers at home.

“We race flat out,” stated Whincup.

“There was quite a big gap back to third and we could have easily played the team game and backed it right off, but there’s a lot of people who paid a lot of money to come this weekend and a lot of people tuning in on TV.

“They don’t want to see a couple of cars cruising around collecting points – they want to see us going flat-out – so hopefully they appreciated the fact that we both almost killed each other just trying to get the win today.

“The cars were fantastic; we ended up way up the road.”

Despite running longer in his first stint, and thus even dropping behind De Pasquale on pit exit, van Gisbergen looked a genuine threat to Whincup for most of the second stint, and again as soon as he got up to speed in his third.

However, the man who now leads the Repco Supercars Championship by 233 points in what is also a Red Bull Ampol Racing one-two, admitted he was not always confident that he could win Race 15.

“My start was good; his was just a little bit better and he cleared me.

“Then in my first stint, my car felt really average – but, just dirty air – and as soon as I got in clear air in my second stint and new tyres, my car was awesome, it came alive again.

“The gap was a bit larger than I thought it was going to be – I lost a fair bit of time in traffic at the end of that first stint – and then just chipped away and saved the tyres, but the speed was quite good as well.

“Our engineering group and the mechanics, guys at the shop… It’s amazing how good our cars are this weekend. It’s fun to drive; I’ve got to make the most of it.”

For the New Zealander, it was also a taxing afternoon physically at tropical Townsville’s Reid Park Street Circuit.

“It was a long, tough race – we knew it was going to be – and I probably put too much energy into the racing; I was knackered at the end there,” he admitted.

“Our cars were awesome but this track… you just have to be on it the whole time, and no time for rest, really.

“I’m feeling it, but I’ll be fine tomorrow.”

Whincup said that he “of course” thought he could hold on for victory, but will now look at how to be more competitive tomorrow.

“The car was good pretty much the whole race,” said the seven-time Supercars champion.

“The first stint was nice; second, third, just pushed as hard as I could until I burnt the rear tyres off it and then I would come in and put some new ones on. Thankfully, each time the tyres were done, it was about a third of the race.

“We were in a good place. I’ll just go away and see where the time was.

“Obviously, a fantastic result for the team – a one-two, couldn’t be happier – but we’ll just see where the time was. I think it was around that second stint.

“It’s either driver, car, or strategy; it’s probably the first one, so I’ll have a bit of a look and try to make it a bit more of a race tomorrow if we’re in the same position.”

Qualifying for Race 16 takes place tomorrow at 10:10 local time/AEST, before a Top 10 Shootout early in the afternoon.