Van Gisbergen runs down Whincup in Race 15 at Townsville

Van Gisbergen runs down Whincup in Race 15 at Townsville 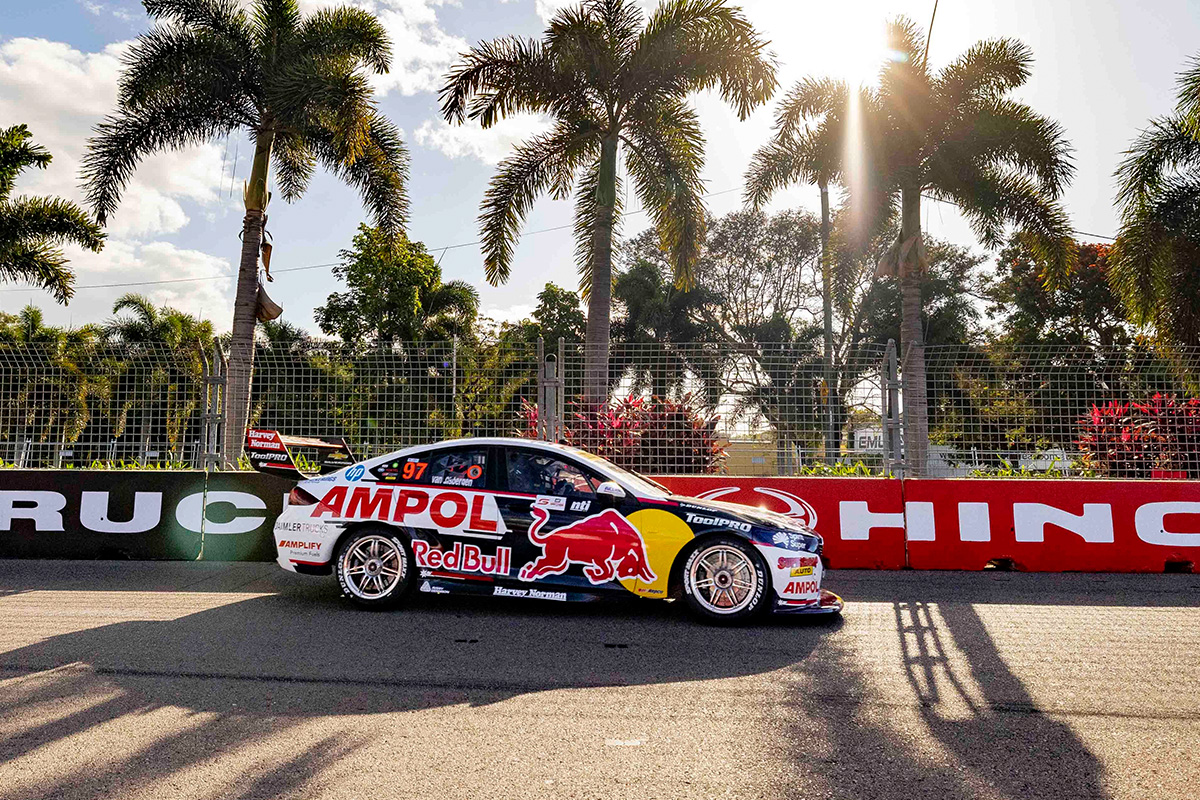 Whincup had got the jump on van Gisbergen from the outside of the front row and effectively led for just shy of 70 laps, but did not quite have enough to close out the deal.

Van Gisbergen’s championship lead is now 233 points, with Whincup continuing to hold second in the standings.

“I’m pretty wrecked,” said the man who has now won the last three races of the season.

“I’ll get fixed up and go again tomorrow. That was real physical but thanks to Red Bull Ampol Racing; our cars were awesome so it’s super cool.”

On chasing Whincup, van Gisbergen said, “It was good fun. I knew I had one shot to do it before the tyres cooked and did it, so, real cool.”

Drama transpired before the lights went out when Fabian Coulthard’s #19 Local Legends ZB Commodore had to be towed off the grid.

The field was sent for an extra formation lap, and one was taken off the 88 laps allocated to the race itself, while Coulthard was able to drive back around to pit exit with a new battery.

Whincup grabbed the lead when hostilities eventually got underway, as van Gisbergen dropped from pole to second.

Davison ceded another spot when Percat went down his inside to take fifth at Turn 3, and Chaz Mostert (#25 Mobil 1 Appliances Online ZB Commodore) climbed from 17th on the grid to 13th on Lap 1.

Reynolds passed Davison for sixth on Lap 3 at Turn 11, while Whincup moved his lead beyond two seconds on Lap 11.

With 20 laps in the book, Whincup led van Gisbergen by 3.1s and Courtney by 10.2s, the latter beginning to want for pace.

Courtney was passed by De Pasquale on Lap 22 and by Percat on Lap 26, then pitted on Lap 27 and was undercut by Reynolds, who had stopped two laps prior.

Whincup got as far as 5.2s clear of van Gisbergen before he lost time as Brodie Kostecki (#99 Boost Mobile ZB Commodore), who pitted earlier, unlapped himself.

Around three seconds separated the front-running Triple Eight Racing Engineering cars when Whincup took service on Lap 29 and was followed into the lane by De Pasquale and Percat.

The latter lost a spot on his out lap when Reynolds swept around the outside at Turn 2, but got it back less than three laps later at Turn 13.

Van Gisbergen went all the way to Lap 33 before taking his initial service and was passed by De Pasquale as he exited the pits.

That made for a running order of Whincup, De Pasquale, van Gisbergen, Percat, Reynolds, Courtney, and Davison, the latter of whom had pitted on Lap 28.

Mostert, who had been in battles just outside the top 10 before a relatively early stop, was eighth, from Pye and Brodie Kostecki, with Waters in 16th.

Van Gisbergen went underneath De Pasquale at Turn 13 on Lap 35, at which point Whincup led by 11.9s.

However, tyre life and fuel fill was in #97’s favour, and the New Zealander set about chipping away at his team-mate’s advantage.

It was down to 3.1s at the end of Lap 55, perilously close to what was believed to be the discrepancy in dwell time which awaited them during the second pit stop cycle, and just 2.0s after two laps more.

Whincup pitted on Lap 58 and, back with fresher tyres relative to his team-mate, was able to stretch the elastic band again.

Van Gisbergen ran six laps longer and, when he resumed after that second stop, trailed Whincup by more than three seconds.

Whincup briefly got over four seconds ahead of van Gisbergen on the latter’s out lap but the tide turned even quicker than it had done before.

On Lap 70, #97 made a dive at Turn 11 and while there was a nervous moment when the rears locked, they avoided contact and van Gisbergen went on his way.

He gapped Whincup by more than a second in the next 2.86km, and two more seconds in the following five laps.

That was effectively the battle for the first handful of positions over, van Gisbergen winning by an official margin of 7.3681s, but there was still intrigue further back.

Davison pitted from fifth with three laps to go having been just short of the compulsory fuel drop, handing the position back to Reynolds having passed him on Lap 68.

The DJR driver resumed after his third tour through the lane in eighth position, but also lost that when Waters went down his inside at Turn 2 on his out lap.

Reynolds, meanwhile, still had a task on his hands with Slade applying pressure, but the Kelly Grove Racing driver held firm to finish fifth.

Mostert ended up 14th, still enough to retain third in the championship, while Pye came to grief at Turn 8 on Lap 54 and finished 10 laps down in 23rd after repairs.

The next session is Qualifying for Race 16, tomorrow from 10:10 local time/AEST, then a Top 10 Shootout in the early afternoon.