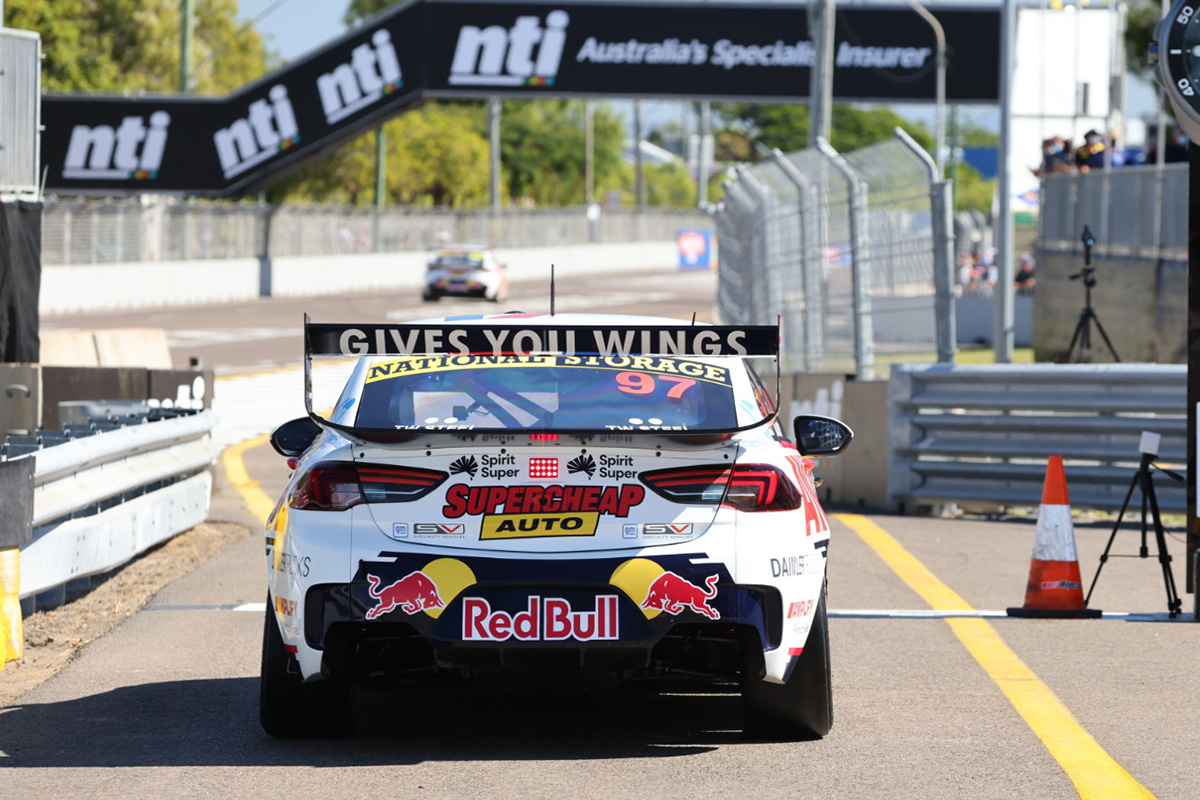 Shane van Gisbergen has prevailed in the Top 10 Shootout for Race 15 at the NTI Townsville SuperSprint by 0.3572s over Triple Eight Race Engineering team-mate Jamie Whincup.

The Red Bull Ampol Racing entries lock out the front row for this afternoon’s 88-lap Repco Supercars Championship encounter, while both Shell V-Power Racing Team Mustangs will take up Row 2.

Will Davison was third-quickest in the one-lap dash and Anton De Pasquale the big mover in going from a provisional 10th to fourth on the grid.

A slight increase in the mercury relative to the morning’s qualifying session made for an apparently slipperier Reid Park Street Circuit.

De Pasquale was first to experience it and while he could not quite beat his provisional qualifying time, none of the next five drivers beat his shootout time of 1:12.7292s.

Davison did, understeering at Turn 3 but setting new fastest first and third sectors which added up to a 1:12.7135s.

However, the #17 Mustang’s reign at the top of the timing screen lasted far less time than #11’s, with Whincup (#88 ZB Commodore) next on track and setting a 1:12.6699s despite skating on the rears into Turn 7.

Van Gisbergen (#97 ZB Commodore), however, belted out fastest sectors all the way through the 2.86km lap, breaking the beam at the control line a time of 1:12.3127s.

“I saw the splits through the middle of the lap and I just saved the tyre for the last sector, for the race; unbelievable.

“But, it actually gave me more grip because I wasn’t wheel-spinning.

“I’m just the lucky guy who gets to drive this car; it’s a pretty special place to be in at the moment.”

Nick Percat (#8 R&J Batteries ZB Commodore) clocked a 1:12.7736s which left him where he started in fifth on the grid.

James Courtney (#44 Boost Mobile Mustang) was first of the three Tickford Racing drivers in sixth on a 1:12.8317s, with team-mate Jack Le Brocq (#5 Truck Assist Mustang) a position behind having recorded a 1:12.9125s.

Reynolds kicked up the dirt between Turns 9 and 10 as he set a 1:13.1762s, and Waters was visibly frustrated after a somewhat untidy 1:13.2195s dropped him four spots from a provisional sixth.