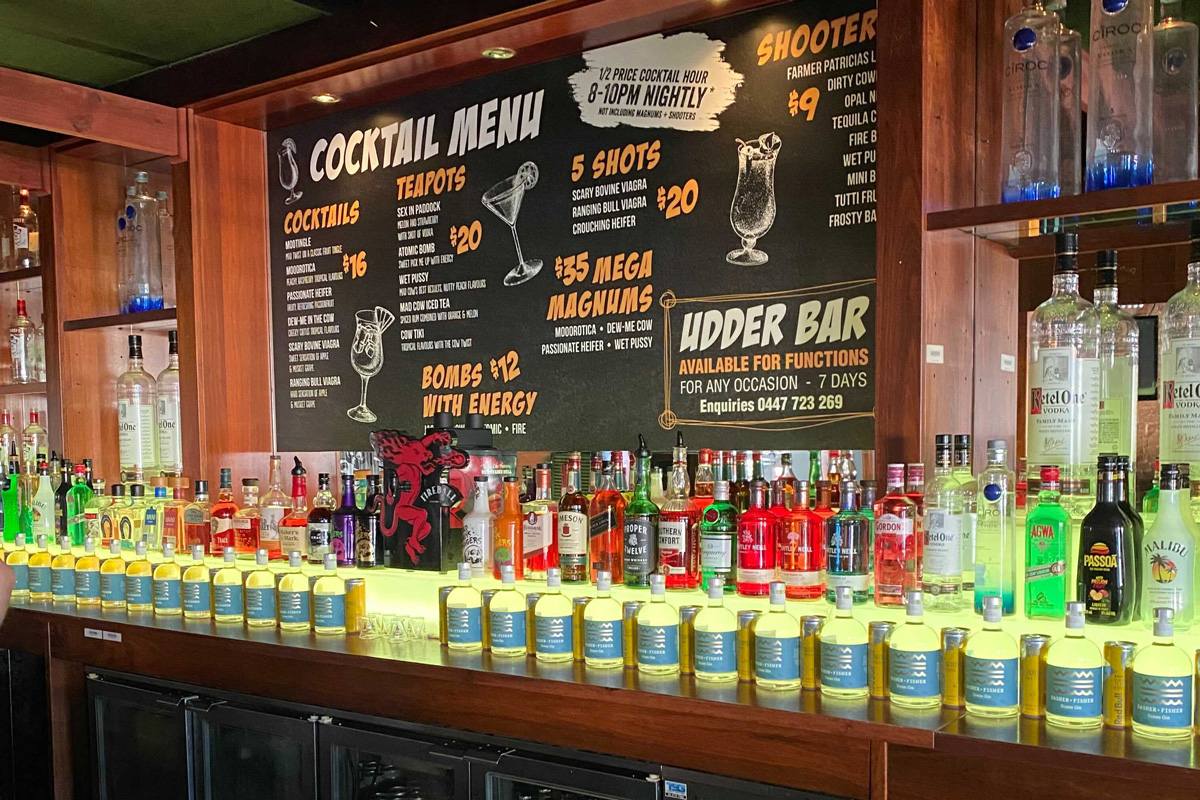 The Mad Cow has been the northern home of Speedcafe.com’s traditional Greenroom afterparty for the past 12 years.

Unfortunately, current COVID restrictions in Queensland have meant Sunday night’s scheduled Greenroom, presented by Dasher + Fisher gin, has had to be cancelled, but the Mad Cow will remain the unofficial home for Supercars teams and fans.

Plenty of Dasher + Fisher product has been delivered to the Flinders St venue in preparation for an influx of teams and fans over the next nine days.

The Mad Cow Tavern is described as an “Australiana Saloon-Goodtime Bar” and has established itself as a fun, crazy, safe venue with a laidback North Queensland attitude.

The Mad Cow is also a member of Networkcafe.com.au where it has enjoyed plenty of publicity and networking opportunities during the COVID period.

Mad Cow owner Mark “Red Dog” Napier says he was shattered at the cancellation of the Greenroom for the second consecutive year, but says his team will be doing everything to look after fans with Dasher + Fisher product all week.

“The Greenroom has been such a big part of the Townsville Supercars weekend for a long time,” said Napier.

“We were shattered when we could not hold the event last year and we thought we were all set for a return this week before the latest COVID restrictions came into play.

“We have plenty of Dasher + Fisher gin and Red Bull in stock and will be serving discounted cocktails for Supercars all week.

“The one thing that is for sure is that we will be working with ‘Crusher’ and Speedcafe.com for a cracking event next year.”

Speedcafe.com founder and owner, Brett “Crusher” Murray says that it’s disappointing to have to shelve the Greenroom given all the commitment from the event’s stakeholders.

“The Mad Cow is a fantastic venue and has been the home for Supercars fans on this weekend for many, many years,” said Murray.

“Red Dog and his team are incredible hosts and they will have plenty of Dasher + Fisher gin on the bar for this weekend and the week after as they head into the next part of the Supercars double-header.

“The guys at Dasher + Fisher have been enormously enthusiastic about presenting their first Greenroom and we encourage everyone in Townsville this week to drop into the Mad Cow and sample some of their great product.

“We are incredibly disappointed that we have had to shelve plans for our Greenroom at the Mad Cow this year, but it will still be a cool place to hang out. Tell them Crusher sent you.”

Speedcafe.com and Dasher + Fisher will be teaming up for the season-ending Greenroom on the Gold Coast in December, which is shaping as the biggest event of its type seen in Australia at an exciting new venue.