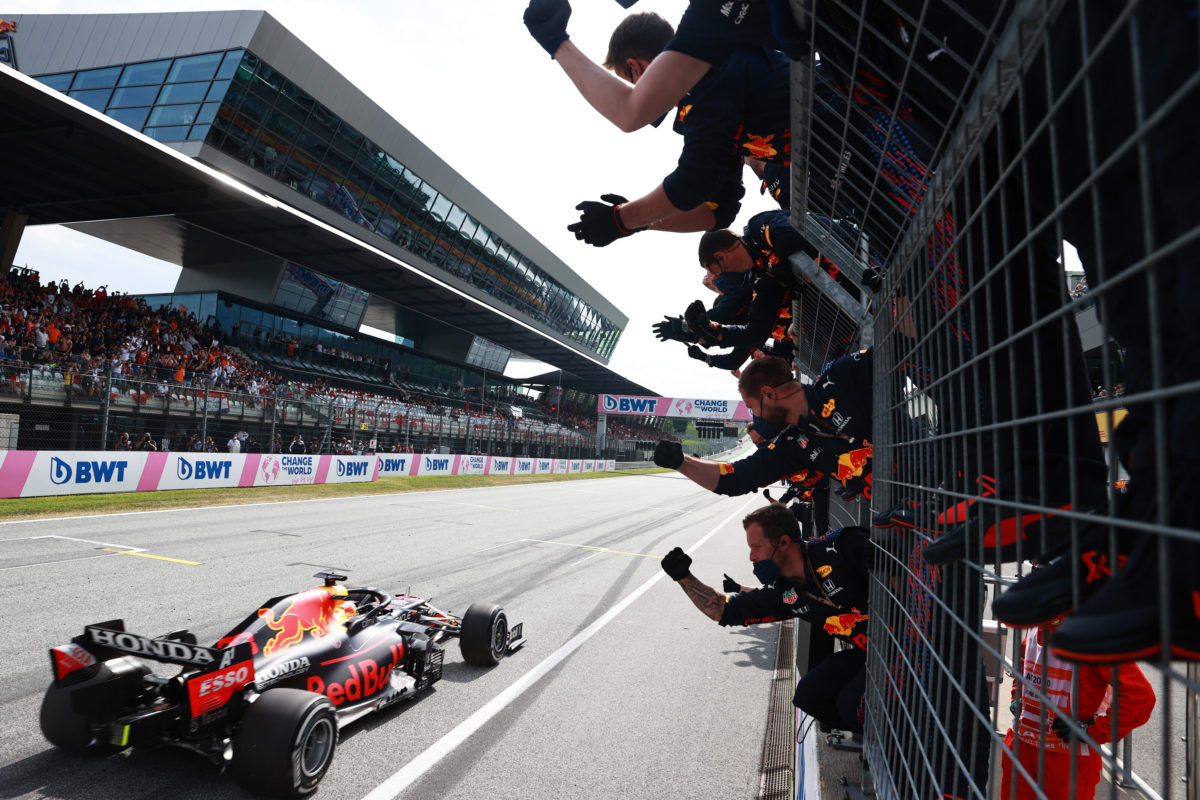 An utterly dominant Max Verstappen was without peer at in the Formula 1 Austrian Grand Prix to record his first career grand chelem.

Having started on pole, the Dutchman won by nearly 18 seconds after leading every lap and claiming fastest lap.

Valtteri Bottas was second ahead of Lando Norris, who can feel somewhat hard done by after picking up a time penalty early in the race, with Lewis Hamilton in fourth.

Perez found himself under attack at Turn 4, Hamilton looking to round the outside of the Red Bull driver but unable to make the move stick.

In the pack, Esteban Ocon was squeezed as he rounded Turn 3, breaking the right front suspension on the Alpine to end his race and draw the Safety Car.

Daniel Ricciardo enjoyed a strong opening lap to move up two places, while George Russell went the other way, falling from eighth to 12th.

The race restarted on Lap 3, Verstappen backing up the field in an effort to counter Norris’ top speed advantage.

That saw the pack concertina, Perez drawing alongside the second-placed McLaren on the run to the first corner but was pushed wide.

He tried again at Turn 4 with the same result, though the penalty was greater as he found the gravel, dropping from third to 10th as a consequence.

In the lead, Verstappen was able to quickly extend a comfortable advantage as Norris bottled up both Mercedes.

Strategically, Ricciardo found himself in a strong position, running ninth after Perez’s mistake, behind four cars on soft compound tyres.

Having started on a new set of mediums on his McLaren, it gave the Australian the chance to race for a potential fifth place.

As Hamilton engaged Norris for second, Bottas found himself falling away, dropping more than three seconds back from his team-mate in the 10 laps following the Safety Car’s withdrawal.

Yuki Tsunoda on the soft tyres pitted on Lap 13 promoting Ricciardo to ninth.

As the AlphaTauri took to the lane, race control confirmed the Norris-Perez incident at Turn 4 would be investigated, having first noted it.

Pierre Gasly pitted on the next lap, releasing the train of cars headed by Lance Stroll followed by Sebastian Vettel, Ricciardo, Perez, and Charles Leclerc.

The Ferrari driver stole ninth at Turn 4, sneaking underneath the Red Bull exiting the corner after launching an attack under braking.

Stroll was the next in, the soft-shod Aston Martin pitting from fifth.

On Lap 17, Ricciardo passed Vettel at Turn 4, easing by the German who promptly stopped, the last of those who’d started on softs to take service.

Norris’ race took a hit when he was handed a five-second penalty for forcing another car off the track, the result of the investigation launched into his early exchange with Perez.

Not long after, he fell to third as Hamilton moved by on the drag out of Turn 3.

Tsunoda was also penalised after he was judged to have crossed the pit entry line when taking his first stop, an error he would repeat later in the race to collect another penalty.

After 29 laps, McLaren called Ricciardo in, the Australian feeding out in front of Nicholas Latifi in 12th place with a fresh set of hard compound tyres.

Next time by, Norris and Bottas stopped, the latter jumping the McLaren driver courtesy of the five-second hold he was forced to serve.

It was Hamilton’s turn next time through, his stop coming as Verstappen closed on a train of cars to lap them.

Rather than carry on and lose time working his way through traffic, Red Bull pitted the race leader to send him out with minimal delay.

Perez pitted on Lap 33, rejoining behind Norris in 11th, though with a number of cars ahead yet to stop.

The pit sequence continued with Leclerc on Lap 35, the Ferrari driving finding himself undercut by Perez.

Having emerged from the pits trailing Gasly, Ricciardo had reeled in the AlphaTauri and by Lap 39 found himself in DRS range.

Behind the Australian, Perez and Leclerc were in his wake, making for a four car train battling over an effective fifth place – Sainz ahead yet to serve his first stop.

Leclerc made a move on Perez at Turn 4 on Lap 34, almost a carbon copy of the Lap 4 clash the Red Bull driver had experienced with Norris.

His role was reversed, however, with the Azerbaijan Grand Prix winner holding his line and forcing Leclerc off the road.

It immediately caught the eye of officials, who investigated the incident and promptly dished out a five-second penalty.

Despite Ricciardo enjoying a tyre advantage over Gasly, the McLaren driver found himself unable to clear the Frenchman.

He came close on Lap 46, looking to perform a switchback at Turn 4, but was unable to close the deal.

On a two-stop strategy, Gasly stopped at the end of the lap to release Ricciardo, Perez, and Leclerc.

Again the Ferrari driver attacked Perez at Turn 4, looking to cut back on the Red Bull and driving side by side to Turn 6.

It saw the Leclerc again pushed wide, an incident initially noted and then investigated by the stewards.

Up the road, Bottas was told not to race Hamilton, who was struggling with damage to the left-rear aero on his Mercedes.

Sainz finally pitted after 49 laps, the Ferrari driver emerging behind Tsunoda in ninth but with a fresh set of soft compound tyres.

With Norris closing in on third-placed Bottas, Mercedes backflipped on its earlier instruction, releasing the Finn to race Hamilton.

Having looked at the second Perez-Leclerc incident, officials slapped the Mexican with another five-second penalty for forcing a car off the road.

On Lap 52, Mercedes switched the order of its two cars, Bottas allowed through at Turn 3.

Almost immediately, Norris launched an attack on the seven-time champion, making the move stick at Turn 6 on Lap 54.

Defeated, Hamilton pitted at the end of the lap for a fresh set of tyres.

He held a comfortable gap to Perez in fifth, the Red Bull having passed Ricciardo on the road.

The Mexican still had 10 seconds worth of penalties to add to his race time, forcing him to push in an effort to extend a gap to those behind to safeguard his position.

Leclerc then began attacking Ricciardo, looking to go underneath the Australian at Turn 4 on Lap 58 with a late move, and came close to contact.

Verstappen pitted on Lap 60, Red Bull pulling him in to fit a fresh set of hard tyres – Bottas was almost 30 seconds behind the Dutchman at the time, making it a free pit stop.

His lead when he rejoined was still more than nine seconds, and he duly delivered the fastest lap of the race with a 1:06.200s – a time almost two seconds faster than anyone else had managed in the race.

The two Ferraris swapped placed at Turn 3 on Lap 66, the more freshly-booted Spaniard released to attack the McLaren ahead.

Russell’s hopes of a point for 10th came to nought when Fernando Alonso found a way through at Turn 4 with three laps remaining.

It had been an engaging battle between the pair for a handful of laps up to that point, the Spaniard forced to work hard to gain the spot.

On the penultimate lap, Sainz made his way through easily on Ricciardo to claim sixth place, immediately pulling clear.

Almost a lap ahead, and largely unnoticed, Verstappen claimed a dominant win, a grand chelem after starting from pole, leading every lap, and claiming fastest lap.

Bottas held on to second from Norris and Hamilton in fourth, while Perez crossed the line fifth though his time penalties saw him fall to sixth behind Sainz.

Ricciardo was seventh with Leclerc, Gasly, and Alonso rounding out the Top 10.

A final lap clash between Raikkonen and Vettel saw the pair off the road at Turn 5 after they interlocked wheels and skated off the road to see them reach the flag in 16th and 17th respectively.

Verstappen now holds a 32 point advantage in the world championship over Hamilton, with Norris now fourth just three points down on Perez.

Red Bull’s advantage in the constructors’ fight has moved out to 44 points over Mercedes, McLaren on 141 points less than half of the championship leader’s tally.

After three races in as many weeks, F1 now has a week off before the British Grand Prix, the 10th round of the 2021 season.