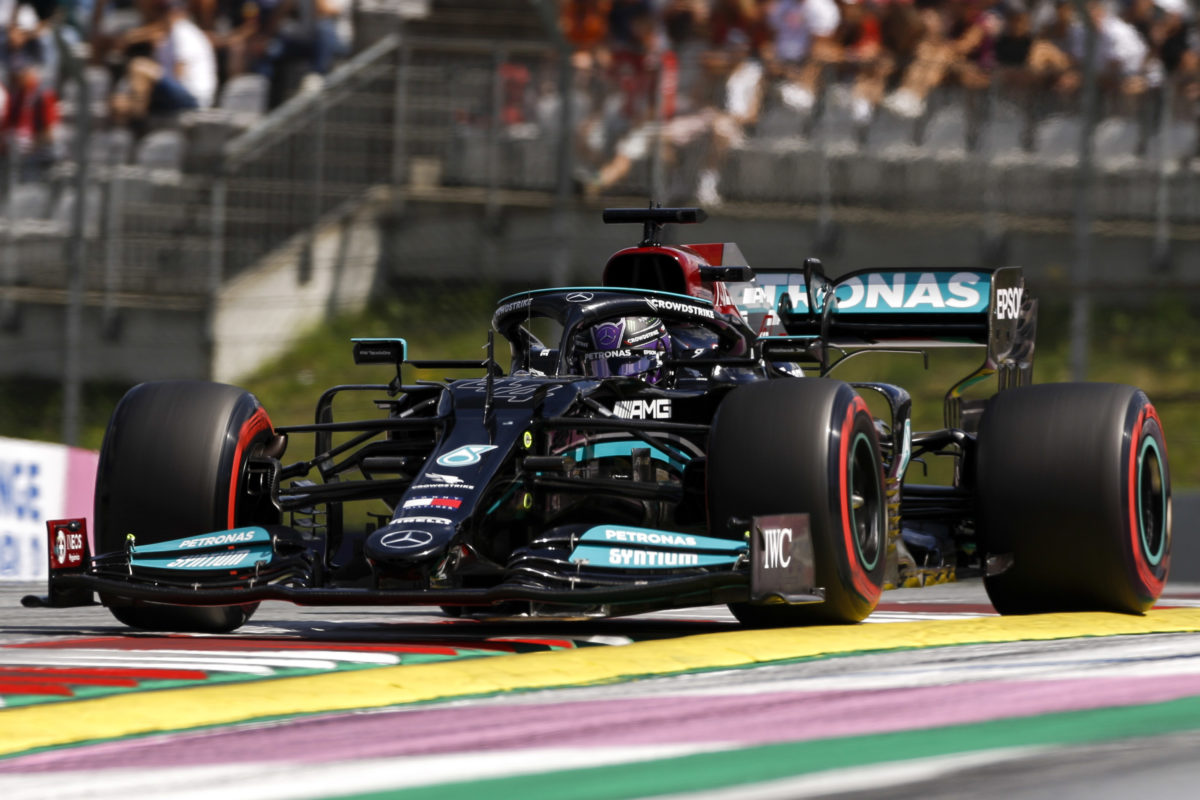 Mercedes has revealed the damage to Lewis Hamilton’s car during the Formula 1 Austrian Grand Prix that cost the Englishman more than half a second a lap.

Hamilton finished fourth at the Red Bull Ring, having climbed to second in the opening stint before he dropped performance.

That saw the team make the decision to instruct he and team-mate Valtteri Bottas to swap positions, soon after which Lando Norris attacked and passed the 36-year-old.

Speaking after the race, Hamilton lamented the damage to his car, suggesting he would have finished a comfortable second place otherwise.

That was reinforced by the team when Andrew Shovlin revealed the full extent of the damage the seven-time world champion carried.

“A solid day for Valtteri starting fifth and finishing second but a disappointing one for Lewis after he lost a lot of downforce with some bodywork damage before the stop,” said Shovlin, Mercedes’ trackside engineering director.

“It looks like the bodywork damage for Lewis was at the end of Lap 29 just before we came in.

“The downforce loss was around six or seven tenths but as it was all from the rear, the balance become difficult and we were damaging the rears with sliding.

“That dropped Lewis from second to fourth but at least we had Valtteri up there to pick up the position.”

Bottas’ rise to second was eased by Norris picking up a five-second time penalty, which was served at his first stop.

That saw the Finn ease by the McLaren as it remained stationary in the pits, the pair having boxed on the same lap.

At the chequered flag, Bottas headed Norris by two seconds, with both he and team principal Andreas Seidl suggesting he’d have been second without the penalty.

Neither McLaren nor Mercedes however could come close to Red Bull’s Max Verstappen, who cantered away at the front to dominate the race.

He now holds a 32-point advantage over Hamilton in the drivers’ title fight, with Red Bull 44 points clear at the top of the constructors’ standings.

The Milton Keynes squad has now won the last five races on the bounce, and Verstappen the last three, including dominant performances in both races at the Red Bull Ring.

“We know we’ve not been strong enough at this track over a range of conditions so we need to go away and work hard to understand that,” Shovlin conceded of Mercedes’ Austrian and Styrian Grands Prix performances.

“For the British Grand Prix we’ll bring an update package and it’s also a track that has suited our car in recent years.

“We really missed the fans in 2020 but we’ll be working hard over the next few days to recover our form and hopefully can give them something to cheer about on race day.”

The British Grand Prix gets underway on July 17 with a single practice session before the traditional hot-lap style qualifying session on Friday afternoon in what will be the first time F1 has employed the Sprint Qualifying format.