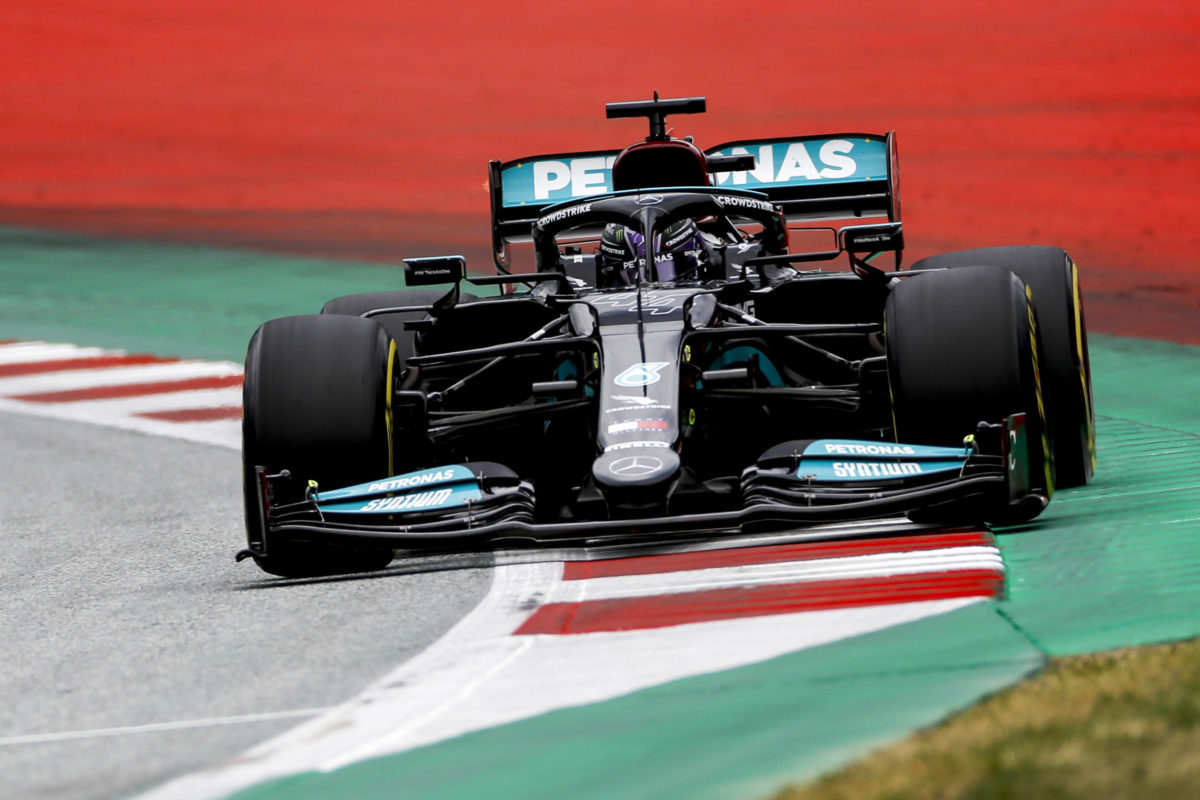 Lewis Hamilton has attributed his mid-race drop in pace during the Formula 1 Austrian Grand Prix to damage on his Mercedes W12.

The Englishman battled his way to second, passing Lando Norris a third of the way into the race only for his pace to fall away as the race wore on.

He was forced to cede second to team-mate Valtteri Bottas on Lap 52 and quickly then fell victim to Norris to fall to fourth.

Speaking post-race, the seven-time world champion pointed to damage to the rear of his car as the reason he failed to finish on the podium.

“I already said before the race that it would be very hard to beat Max [Verstappen],” Hamilton told Sky Sports.

“But obviously frustrating to lose so much downforce in the rear of the car and not be able to hold on to second place.”

During the race, the Mercedes pit wall informed Bottas of the damage to Hamilton’s car, and advised the Finn to stay off the kerbs at Turn 10.

However, Hamilton is uncertain whether riding the kerbs was the cause of the damage.

He also suggests were it not for the loss of performance that resulted, a podium finish was on the cards.

“I wasn’t going over the kerb any more than anyone else, so I don’t I have no idea where it happened, but there’s a lot of damage,” he said.

“I would have been second,” he added of his likely result.

“I was in second when all of a sudden that obviously broke, so it would have been an easy second, generally, but obviously not able to catch those guys ahead.”

Hamilton has now fallen 32 points behind Verstappen in the world championship fight, while Mercedes is 44 points in arrears of Red Bull after the opening nine rounds.

After three grands prix in as many weeks, Formula 1 has a week off before the British Grand Prix, time last year’s world champions will use to claw back lost ground.

“We’re miles away from them [Red Bull], so we’ve got to get a lot of work to do,” Hamilton said.

“We need all hands on deck, which I know they already are.

“They’ve [Red Bull] brought a lot of upgrades clearly over these past few races and we haven’t bought any.

“So we’ve got to find as much performance as possible otherwise this will be the result most often.”

Hamilton’s result in Austria makes for five races in a row in which he’s not claimed victory, his worst run since 2017-2018 when he went six races between wins.

His last success came at the Spanish Grand Prix in May, an event which also marked the last time he started from pole position.’

With British Grand Prix next, it’s a return to an event Hamilton has dominated in recent years, winning every year since 2014 with the exception of the 2018 edition.