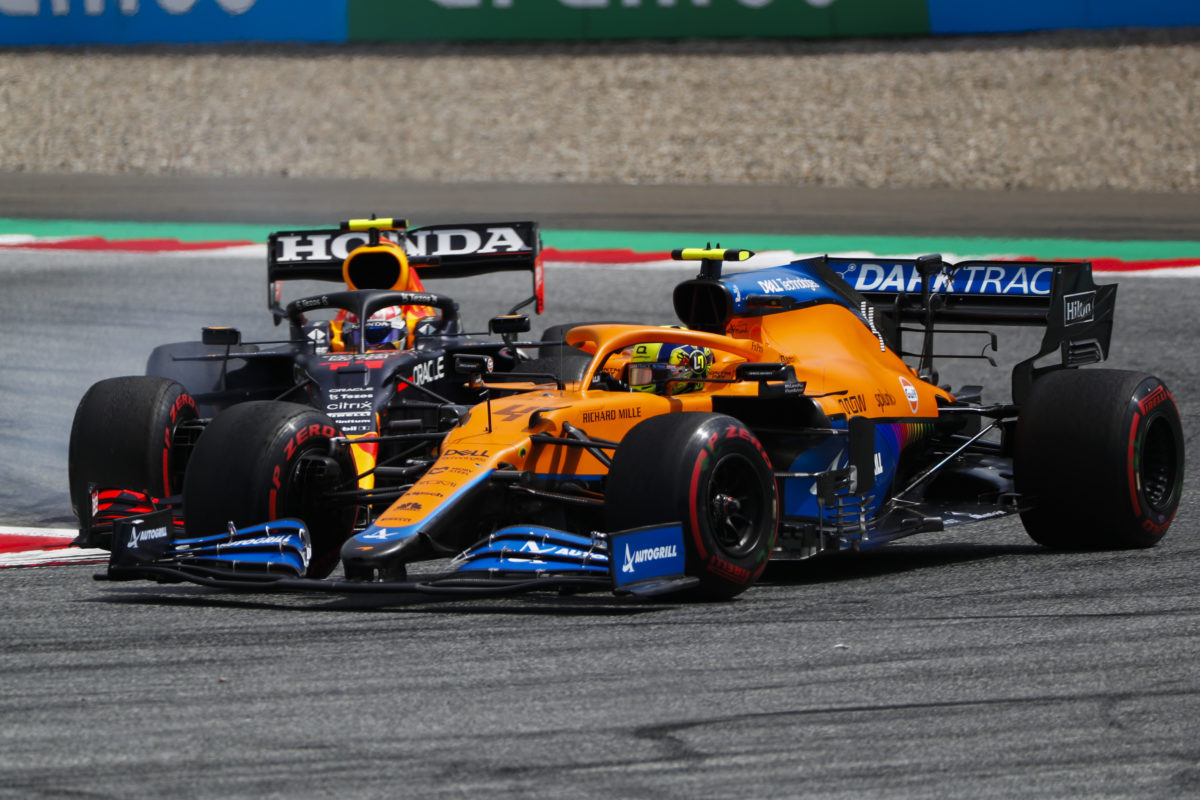 Lando Norris and Sergio Perez both felt the wrath of officials, the latter on two occasions, while battling for position during the 71 lap encounter.

In Norris’ case, he picked up a five-second penalty after he was judged to have forced Perez off the road.

Served at his pit stop, it arguably cost the McLaren driver second in the race.

Perez meanwhile was twice slugged with five-second time penalties after battling with Charles Leclerc, the Ferrari driver deemed to have been forced off the road on two separate occasions.

The Mexican crossed the line in fifth at the chequered flag, though since his incidents occurred after his final stop, 10 seconds was added to his time and he fell to sixth in the classification.

On top of the added time, both Norris and Perez picked up penalty points on their licences, taking the former to a total of 10 for the 12-month period and the latter to eight.

Drivers are allowed to accrue a total of 12 points in a rolling 12-month period before facing a one-race ban.

“I said in the commentary that I didn’t have a major problem with the Lando move [on Perez],” Red Bull boss Christian Horner told Sky Sports.

After Perez came off second best to Norris in the opening exchange, the Red Bull driver returned serve, picking up a penalty for a similar clash with Charles Leclerc mid-race.

Like the earlier incident, Horner suggests should have been dismissed as nothing more than a racing incident.

“It was racing; it was hard racing, it was wheel-to-wheel, so then to get a penalty for that… I guess they gave themselves no choice when he had the same with Charles,” he said.

“But that’s racing, otherwise you’re going to get drivers just chucking themselves off the circuit and claiming penalties, so it’s a bit disappointing.”

While he recovered to finish third, Norris was left confused by the penalty, suggesting there have been other similar instances during the course of the season that have gone unpunished.

“If I want to compare it to anything, it’s the same as Max and Lewis in Imola,” the McLaren driver reasoned.

“It’s Lap 1, or it’s a restart and I think Sergio I expect, maybe he doesn’t know that there’s gravel on the exit of that corner, and it’s downhill easy to kind of run wide, and that’s just what happens.

“Watch Formula 2 or Formula 3 or any category like people you try and go around the outside there and don’t commit to it end up in the gravel, that’s just the way the corner runs.

“He took the risk and not me,” he added.

“He didn’t commit his overtake the way he should have done and he put himself in the gravel, so I don’t feel like it was my mistake.”

His McLaren team boss was also left confused by the penalty, Andreas Seidl agreeing with Horner’s assessment of the situation.

“To be honest, I don’t understand why he gets a penalty,” said Seidl said of the Norris-Perez incident.

“That is for me racing, racing that we all want to see, and I don’t think that Lando did anything wrong.

“He was just going on his racing line, he didn’t do anything stupid and did some type bombing or whatever, he was always parallel to him or even slightly ahead of Checo, so honestly, I don’t understand.

“Every go kart driver knows that if you go there to the outside the first race lap, you will end up in the gravel.”

The penalty arguably had a significant impact on Norris, who finished third just two seconds behind Valtteri Bottas despite serving a five-second hold penalty at his pit stop.

“I think that was a good chance to score P2 today because we have seen with being in front of Valtteri it’s difficult for him to overtake with the pace Lando had today,” Seidl suggested.

“That’s why it’s a bit annoying, that’s why Lando was also a bit frustrated in crossing the start-finish line.”

Norris sits fourth in the drivers’ championship, three points behind Perez and nine clear of Bottas after nine races.

Formula 1 is next in action at the British Grand Prix on July 16-19.