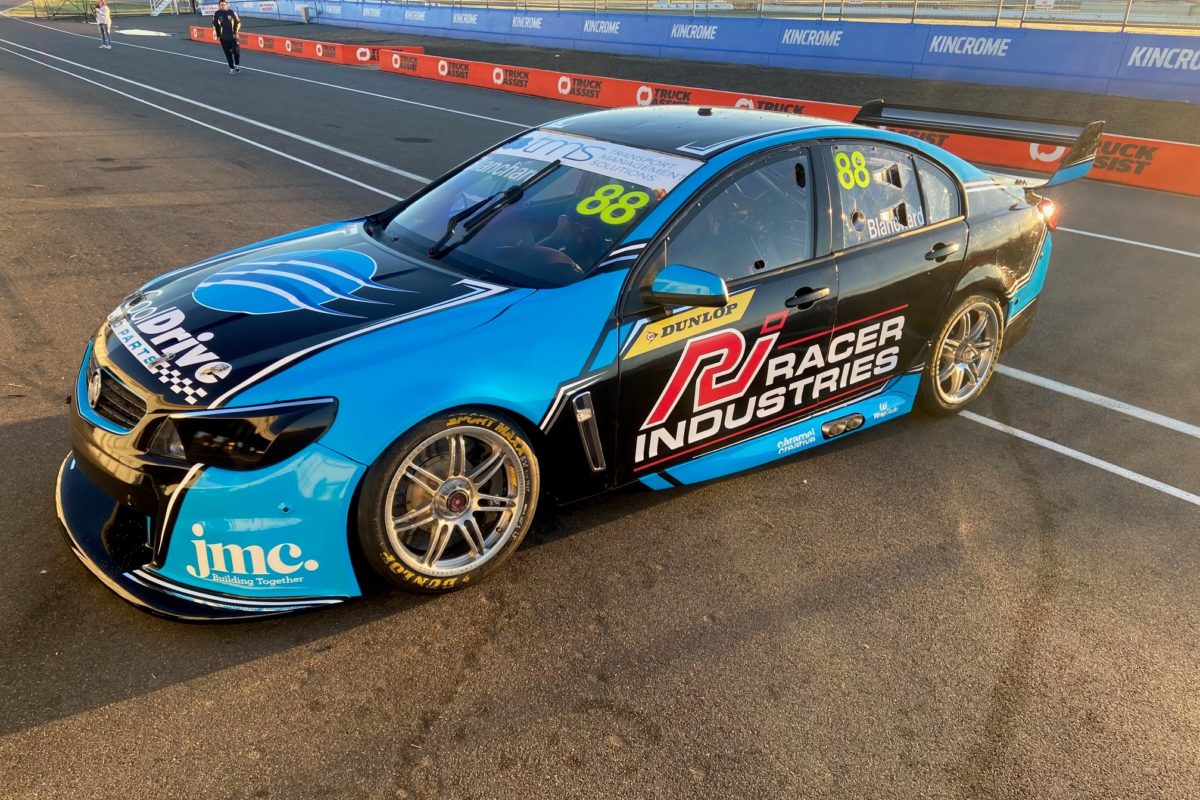 The Eggleston Motorsport Commodore with Tim Blanchard’s backers at Winton

Tim Blanchard will be part of the Dunlop Super2 Series at Townsville and Sydney in readiness for his drive in this year’s Repco Bathurst 1000.

Blanchard is once again the Great Race co-driver for his own CoolDrive-backed entry, now a Mustang piloted normally by Tim Slade, a role for which he will prepare by undertaking two Super2 rounds with Eggleston Motorsport.

“I haven’t done a lot of racing in the last two years, so it’s just an opportunity to get some miles up and get ready for the enduros; basically, preparation,” Blanchard told Speedcafe.com.

While Supercars is looking at adding another event at the Reid Park Street Circuit following this weekend’s NTI Townsville 500, and could involve Super2 in both, Blanchard confirmed he will be undertaking just the one round in North Queensland.

The outing will come just days after CoolDrive Auto Parts formally took over Racer Industries, one of the key players in the motorsport components industry in Australia, on July 1.

“It’ll just be this weekend, regardless of what happens at this stage, and Sydney’s closer to Bathurst,” explained Blanchard.

“It also just makes a good opportunity to launch Racer under its new guise.”

Blanchard made a one-off appearance in a Super2 round in Townsville two years ago, when he finished second for the meeting overall with a pair of third placings in the weekend’s two races.

“Obviously I’d like to be on the podium again – that would be great – but the main thing for me this weekend is just a consistent weekend, getting my eye in without any silly mistakes leading up to Bathurst,” he added.

“Obviously we’re going there to try and get a good result, but it’s mainly preparation for Bathurst.”

Blanchard tested at Winton last Tuesday, and will be an experienced figure for rookie team-mates Matt McLean and Jack Sipp to lean on.

“It’s fantastic to have a driver like Tim with so much experience join the team for a couple of rounds this season,” said team manager Rachael Eggleston.

“He will be a great asset for EMS and also for his rookie team mates Matt McLean and Jack Sipp who will be able to learn a lot from him.

“He has been quick in the past at Townsville so we expect it to be no different next weekend when we hit the track.”

Eggleston had also run three cars in Round 1 at Bathurst, back in February, but Bradley Neill has been forced out for now as he battles cancer.

Round 2 of the Super2 Series kicks off this Friday in Townsville, while Round 3 could unfold a week later although it is understood that logistical issues including a hire car shortage are being worked through.