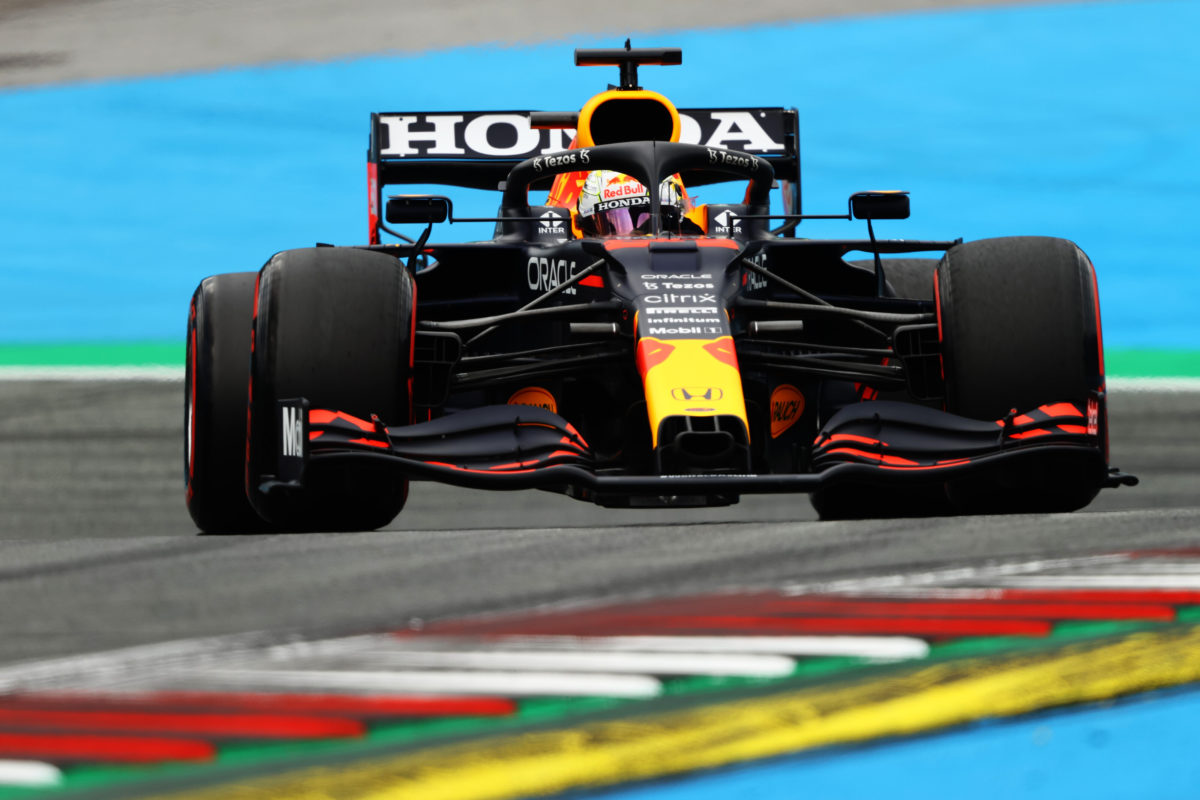 Max Verstappen has firmly re-established himself as favourite for Sunday’s Formula 1 Austrian Grand Prix with a strong performance in final practice.

The Dutchman ended the session half a second clear of the field, Mercedes’ Valtteri Bottas second best from Lewis Hamilton.

While traditionally the opening moments of Practice 3 are quiet, a host of drivers took to the Red Bull Ring as proceedings got underway.

Those who headed out they did so on the prototype tyres Pirelli hopes to introduce at the British Grand Prix while those who stayed in the garage in many instances hadn’t even climbed into their cars.

As had been the case on Friday, track limits were again a common issue, with several drivers running out of bounds.

Conditions were tricky, catching out many drivers including Valtteri Bottas, who dropped a wheel into the gravel at Turn 4 once he eventually emerged from the pits.

It kicked the Mercedes sideways, but the Finn picked up the W12 and was able to carry on.

After 20 minutes, the pace was still anything but representative as Yuki Tsunoda headed the standings with a 1:06.045s.

Lando Norris went fastest with a 1:05.700s after bolting on a set of soft compound tyres having aborted his first hot lap after mounting the kerb on the exit of Turn 1.

That marked a turning point in the session as much of the field switched off the prototype tyres in favour of the red-walled tyres.

Verstappen was among those on the soft tyres, the Red Bull driver commencing his first timed lap of the session at the half-hour mark.

Just prior to the Dutchman completing his lap, Tsunoda had a highspeed spin at Turn 9.

He lost the AlphaTauri at the fast right-hander, the car pitching sideways and skating through the run-off and onto the grass before he picked it up at Turn 10 with a wrecked set of tyres.

A moment for Charles Leclerc, similar to what Bottas had experienced earlier, saw him kick up the gravel exiting Turn 4 just moments before Carlos Sainz clouted the apex kerb at Turn 10 to throw him wide.

Leclerc was second fastest at the time, a 1:05.627s while Sainz was fifth scarcely more than a tenth slower.

Hamilton went second best with a clean lap on the soft tyres, though he was 0.491s away from Verstappen’s best.

He was also slower than the Ferraris in a straight line suggesting the lap was not full beans.

With 15 minutes remaining, Mazepin toured the gravel at Turn 4, finding the service road before rejoining the race track.

The Russian sat rooted to the foot of the timing screens, while team-mate Schumacher rose as high as 12th for a time.

Most drivers had at least one excursion of some sort, be it wild slides, finding the gravel, track limits, or aborted laps.

It served to highlight the knife edge on which teams are operating this weekend with the step-softer tyres.

That included for Hamilton, who ran wide at Turn 10 seconds before Verstappen improved to 1:04.591s, leaving him 0.5s clear of the field.

Had his lap counted, the seven-time champ’s time would have seen him 0.4s off the Red Bull’s pace.

It was a difference which swung the pendulum back in Verstappen’s favour after Mercedes looked to have drawn at least level on Friday afternoon.

The session ended with the Dutchman fastest from Bottas and Hamilton, followed by Pierre Gasly and Antonio Giovinazzi.

Norris and Daniel Ricciardo were 15th and 16th, the latter 0.5s down on his McLaren team-mate.

Both Ferraris found themselves inside the top 10, as did Fernando Alonso, while Sergio Perez was only seventh best, 0.8s away from Verstappen.