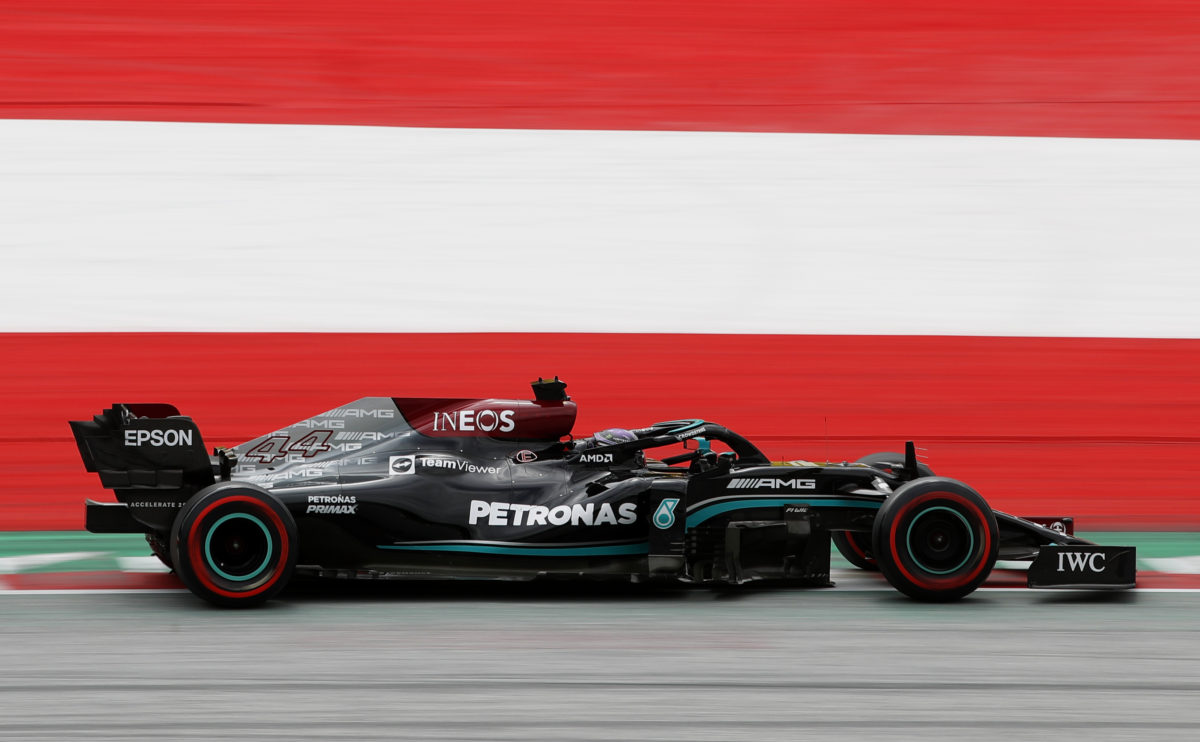 Lewis Hamilton and Valtteri Bottas have offered a glimmer of hope that this weekend’s Formula 1 Austrian Grand Prix will be a more competitive affair.

Having been comprehensively beaten by Max Verstappen last weekend at the Red Bull Ring, the Mercedes pairing headed the Dutchman in Free Practice 2.

Encouragingly, Mercedes power also held fourth and fifth in the session, with Lance Stroll and Sebastian Vettel trailing Verstappen who was third fastest.

Conditions had changed from the morning’s opening practice with clouds loitering ominously.

Every car headed out soon after the session began, in Verstappen’s case on the prototype tyres.

With so many cars on such a short circuit, a queue of cars formed around the Turn 9-10 complex, crawling along just off the racing line.

As others on fast laps blasted by it prompted Charles Leclerc, who was in the queue, to tell his team “that’s dangerous” over the radio.

The early pace was set by Verstappen, a 1:05.709s more than half a second off the pace he had in Free Practice 1.

Track limits at Turns 9 and 10 remained an issue, with Pierre Gasly, Kimi Raikkonen, and Nikita Mazepin all having laps deleted after they overstepped the mark.

Bottas moved to the top of the timesheets after 15 minutes, the Mercedes driver logging a 1:05.602s lap on a set of the medium compound tyres.

A mistake from Leclerc saw the Ferrari driver run off at Turn 9 and almost find the gravel.

The Monegasque suffered from oversteer on entry to the corner but he was able to react and open the steering, using the run off area without further incident.

Verstappen soon set a 1:05.239s to go 0.3s quicker than anyone else before Sergio Perez’s presence on track with a set of soft compound tyres heralded the beginning of the qualifying simulation phase of the session.

It saw him log the second fastest lap, though he did go fastest of anyone in the final sector, setting a 1:05.516s.

He set that time shortly after Esteban Ocon had mustered a near identical time, also on the soft tyres.

Perez’s lap was short of where the pace was expected to be, evidenced by both Aston Martin and both AlphaTauri drivers besting it – at least until Gasly’s lap was deleted for track limits at Turn 10.

Sebastian Vettel’s best was 1:05.268s, just shy of Verstappen’s best who remained atop of the leaderboard.

The Dutchman’s own hot lap came midway through the 60-minute session, as did Hamilton’s, the pair running just seconds apart on the road.

Soon after, spots of rain were reported at Turn 3 and conditions progressively deteriorated for the balance of the session.

While rain fell, it was never heavy enough to warrant consideration of anything other than slick tyres.

The track though did get slippery, evidenced by Hamilton sliding off the road at Turn 4 with 13 minutes remaining.

The Mercedes driver pinched his left-front wheel before then locking the right-front, skating into the gravel before using a service road to rejoin.

A combination of the deteriorating conditions and a focus on longer runs meant the timesheets changed little in the back half of the session.

A week prior, Red Bull had seemed a step ahead, the cooler conditions seemingly favouring the German-powered teams, at least in Practice 2.

In the final minutes, Norris had a spin at Turn 1 after the McLaren driver mounted the yellow sausage kerb, pitching him across the road and onto the grass.

“What damage do you have?” came the question from the pit wall.

He returned to the pits and had the prototype compound fitted, rejoining the circuit with seconds left so he could perform a practice start.

The Brit was ninth fastest, while Daniel Ricciardo was only 15th in the second McLaren.

Also noteworthy was the fact Leclerc was 16th, well down from where he’s expected to feature when the meaningful running gets underway tomorrow.

A final 60-minute practice session follows on Saturday, starting at 20:00 AEST prior to qualifying at 23:00.