The fate of the #1 Stone Brothers Racing Falcon at the 2005 Bathurst 1000 is remembered by many for a particularly infamous moment.

Having fought back from a penalty for not wearing the necessary safety balaclavas, the pairing of Marcos Ambrose and Warren Luff were right in the hunt come a Lap 145 restart.

That is, until Ambrose and Greg Murphy collided at The Cutting, triggering an unforgettable heated exchange between the archrivals.

An element that is not so well known, however, is the painful journey co-driver Luff went through to simply make the race start.

After falling out of a full-time Dick Johnson Racing seat, Luff scored the coveted co-drive alongside two-time champion Ambrose.

But three weeks out from the Great Race, trouble started, as he recalled on the latest episode of the Rusty’s Garage podcast.

“I’ve gone from going to bed feeling great to waking up feeling like a truck had hit me, like my whole body was rundown, my throat was on fire, I could hardly swallow,” said the now Walkinshaw Andretti United co-driver.

Then 29 years of age, Luff headed to the doctors, who downplayed the situation and offered some antibiotics and advice to rest up.

“Over the following days, my health deteriorated massively to the point where I could hardly swallow, I was in so much [pain],” he continued.

“To try to take painkillers or antibiotics was like 10 minutes to build up the courage to try to swallow a tablet.

“Literally swallowing a tablet felt like someone was jamming a knife in the side of my throat. I was in so much pain, I couldn’t eat, I was hardly drinking so I was dehydrated. I was in a world of pain.

“I went back to the doctor a couple of days later and he was like, ‘there’s nothing more, the antibiotics should start to work. It’s just an infection, you’re just going to have to ride it out’.

“So I was starting to panic a little bit because obviously for me at that point in my career, this was the biggest opportunity, like Marcos was coming into the ’05 season as a double champion.”

With the encouragement of SBR commercial manager Brian Lawrence, Luff headed to see the Supercars medical team – and before long, he was hospital-bound.

“I remember just sitting there in the chair and at that point in time I’m like, ‘you know what, whatever you have got to do’; I was in so much pain, I was tired because I hadn’t been sleeping, I was hungry, I was thirsty.

“So they’ve plugged me into an IV [intravenous line] to try to get some fluids back into me.

“I don’t like needles like most people – I remember they’ve come at me with this [massive] needle because what they basically needed to do was put a needle in the back of my throat, so go through the mouth. I remember just laying there and I was like ‘whatever, I just don’t care’. 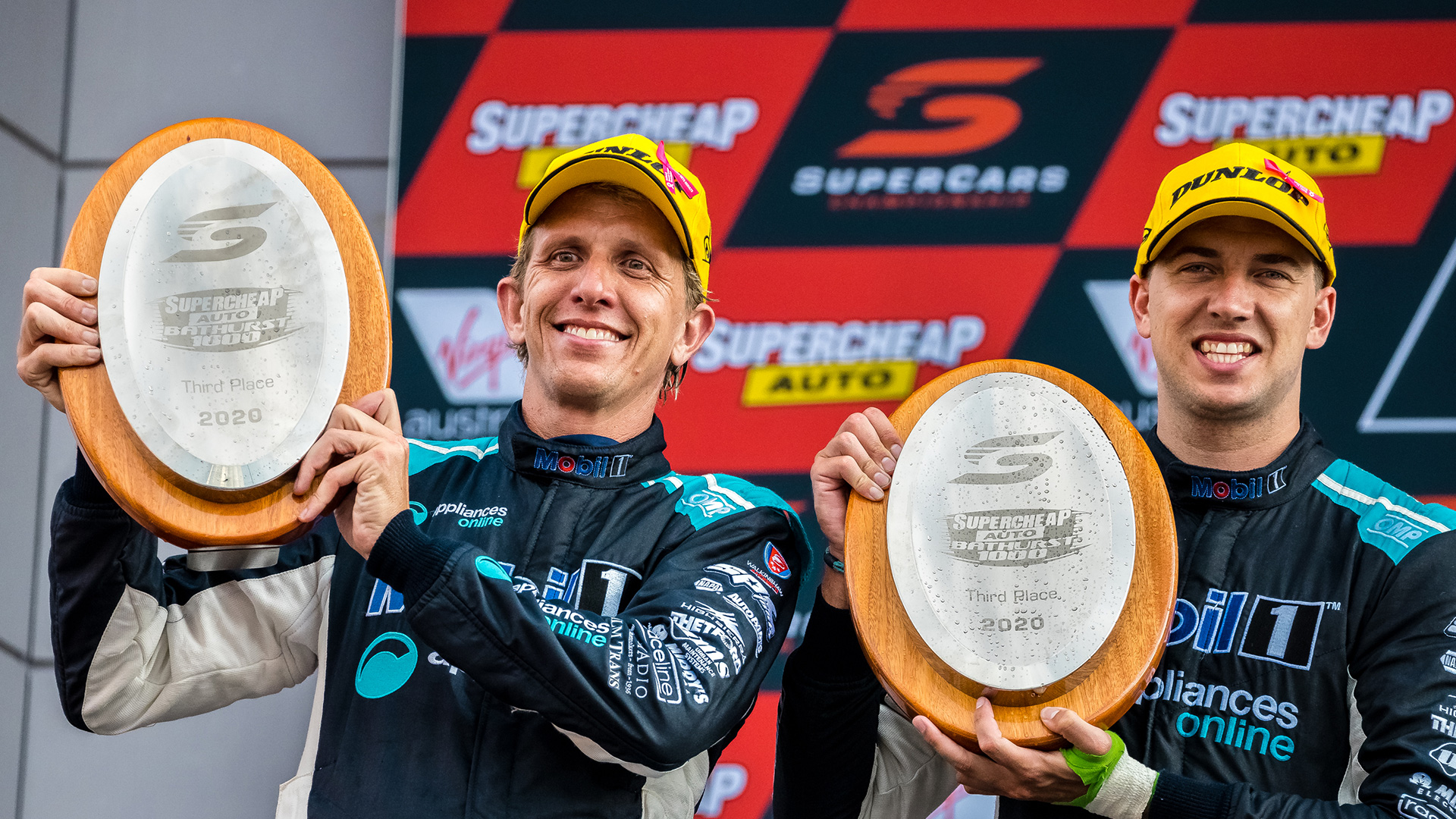 Luff (left) combined with Chaz Mostert for a podium at the 2020 Bathurst 1000. Picture: Walkinshaw Andretti United

Ordered to go home and rest up, the ordeal wasn’t done yet.

“I remember just waking up and just looking at my pillow and there was just blood everywhere all over the pillow because the back of my throat had started to haemorrhage and just blood was coming out quite heavily,” Luff recounted.

“So I’ve rung Brian again, he’s got me back to hospital. I think I spent three days then in hospital because then also the infection had gone into my bloodstream, so I was in a pretty bad way.

“So now we’re probably about a week and a half out when I got discharged from hospital… I was on all sorts of medication and everything like that.

“Again, I think I was still like four and a half kilos down overall on my body weight and just exhausted beyond comprehension, like I was still probably sleeping 13, 14 hours a night, like I just had no energy.

“And because of all the medication I had obviously been on to try to fight the infection in my system and everything like that, the one thing I was very, very conscious about was the whole drugs in sport thing.”

Luff ultimately drove to Sydney and back on the Wednesday night of race week to see a specialist to ensure the medication he’d been given wouldn’t put him in jeopardy for the race.

As it turned out, all the effort amounted to an infamous DNF.

“I suppose probably the most disappointing thing for both Marcos and I was that [even after] the drive-through penalty for me for not having the balaclava on, him having to come in and put the balaclava on for that sort of unscheduled stop, the incident for Murph was actually the pass for third,” said Luff.

“Look, to be honest, I don’t know if we probably had the ultimate speed to match [Mark] Skaife that day, they were really fast.

“But certainly you look at it and you’d like to think we were definitely on for a podium finish, certainly the way that Marcos was driving at that point. He was rather angry and fired up and as we’ve seen, the rest is obviously history.”

Nowadays, Luff is a veteran of the Mountain, with six Great Race podiums to his name.

He’ll team up with WAU youngster Bryce Fullwood in the 2021 edition this October.