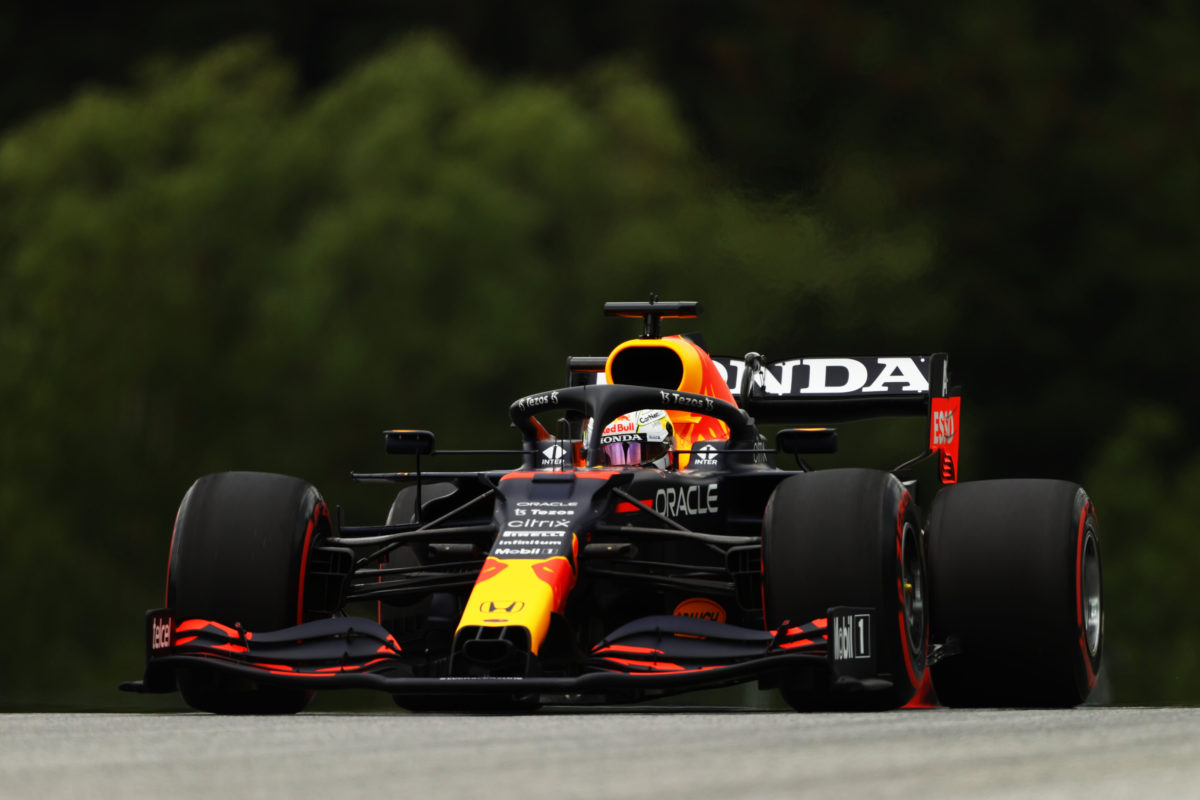 Max Verstappen has carried on where he left of in last weekend’s Styrian Grand Prix by topping the opening practice session for this weekend’s Formula 1 Austrian Grand Prix.

The Dutchman was more than two tenths faster than Charles Leclerc and Carlos Sainz while Lewis Hamilton could do no better than seventh, 0.5s away from his title rival in the first 60-minute practice hit out.

Prototype tyres featured during the session, prompting most to head out on track on the unmarked Pirelli rubber.

Ferrari opted to send both its drivers out on the hard compound tyres, while Red Bull had Max Verstappen and Sergio Perez using the softs.

Compounds are a step softer than were used last weekend; the soft from the Styrian Grand Prix the medium this time around.

Sitting out of the session were Fernando Alonso, George Russell, and Antonio Giovinazzi, replaced by Guanyu Zhou, Roy Nissany, and Callum Ilott respectively.

After a predictable start to the session, with exploratory laps, Yuki Tsunoda bounced his way through the gravel at Turn 4.

Snap oversteer saw the Japanese driver correct the slide, spearing off the road before rejoining and carrying on.

As it had proved last weekend, track limits were again a constant issue, with Lewis Hamilton, Kimi Raikkonen and a raft of others running wide at Turn 10, the final corner.

After starting with a different run plan to most, Red Bull switched its drivers onto the prototype tyres after 10 minutes.

On those tyres, Lance Stroll had a spin in the Aston Martin, finding the grass inside Turn 7 after losing control on the exit of the preceding corner.

The Canadian dropped his right-rear onto the gravel, which saw him skating down the grass on drivers’ left and lucky not to autograph to the barrier.

He had another off at Turn 10 a few minutes later, coming to rest pointing the wrong way.

The rear end got away from the 22-year-old as he looked to start a push lap, flat spotting the soft compound rubber fitted to the car.

To that point, Verstappen was the fastest on track, having recorded a 1:05.558s lap to head Pierre Gasly and Hamilton.

He improved that to a 1:05.143s with 26 minutes remaining, regaining top spot after Tsunoda had briefly headed the running with a 1:05.474s.

And there he stayed for the duration as teams worked through their own individual programmes.

That saw Valtteri Bottas head out with flow-viz paint on the underside of his Mercedes, while Hamilton had it splashed across the bargeboards on his W12.

The Ferrari pairing of Leclerc and Sainz rose to second and third with near identical times late in the session, 1:05.409s and 1:05.431s respectively.

The session ended with Verstappen fastest from the two Ferraris, then Bottas, Tsunoda, Raikkonen, and Hamilton in seventh.

Ricciardo was demoted to 12th fastest courtesy of a 1:05.980s from Esteban Ocon, the Australian remaining 0.3s away from his McLaren team-mate.

Zhou was 14th fastest, 0.4s away from Ocon in the other Alpine, a sound performance in his first F1 race weekend appearance.