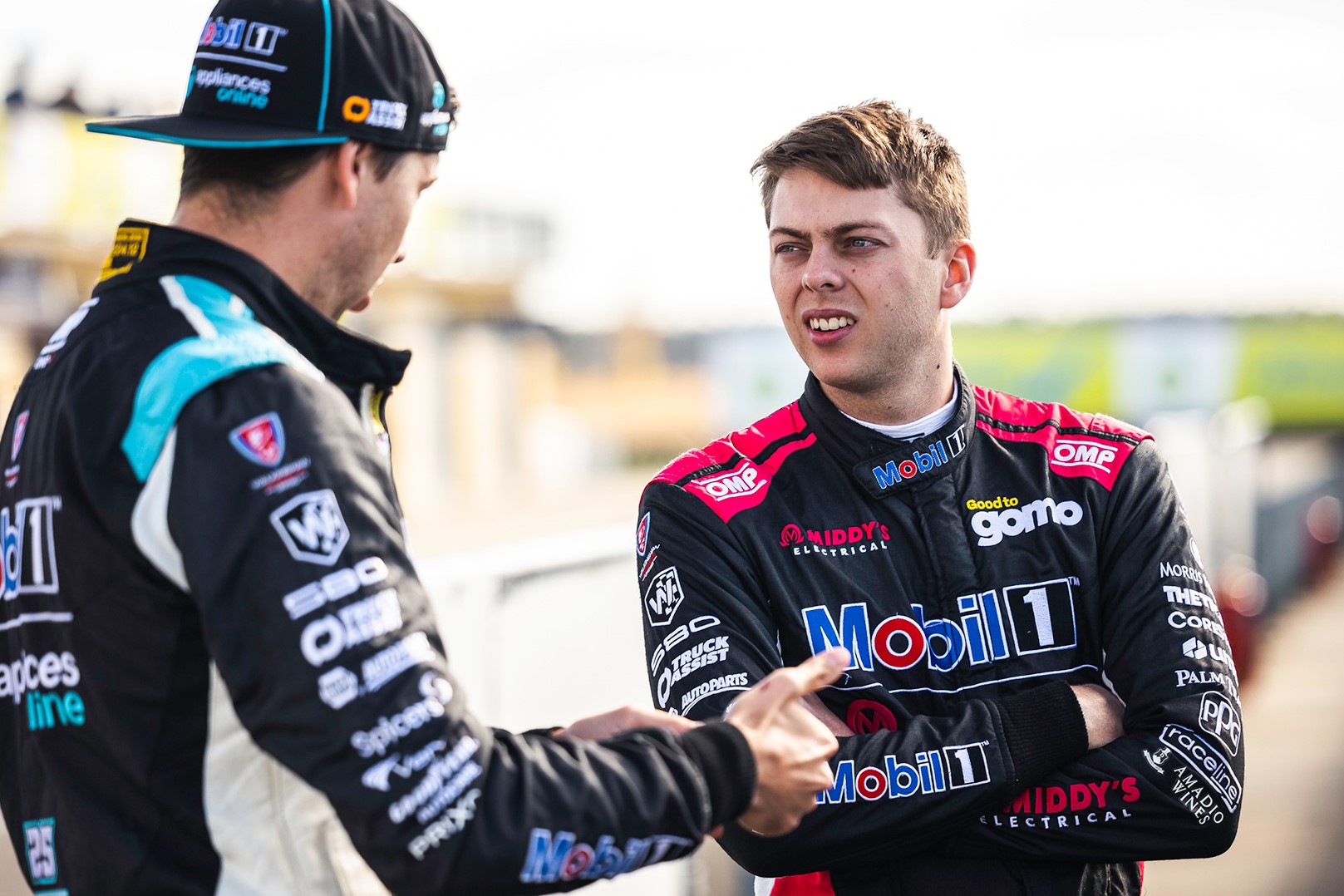 Bryce Fullwood (right) has yet to secure his spot on the Supercars grid for 2022. Picture: Daniel Kalisz/WAU

Mostert has been a standout for the team with two wins and three more podiums to his name at the halfway mark of the season, placing him third in the drivers’ championship.

On the other side of the garage, Fullwood in the #2 Mobil 1 Middy’s Racing hasn’t come close to matching Mostert.

Fullwood’s best result in this year’s Repco Supercars Championship to date remains a fifth place finish in the opening race of the season at Mount Panorama.

While the first half of the season hasn’t gone his way, the Darwin-born driver said it’s no reason for concern as he looks to secure his seat on the grid for 2022.

“I don’t really think about that,” he said of the contract talks.

“For me it’s just about going racing and getting results. That stuff will work itself out.

“I’m excited for Chazzie to be [re-signed] here with the team. For me, it’s just about going racing and taking each race as it comes and trying to put my best foot forward.

“That stuff will come when it’s time.”

While Walkinshaw Andretti United’s commitment to Mostert has come early, Stewart said there’s still some work to be done before looking at Fullwood’s signature.

“I really don’t want to talk about when and how we’ll renew Bryce, but it’s fair to say there’s a lot of affection, trust, and belief in his abilities,” Stewart told Speedcafe.com.

“Our focus right now is to get his performance up to speed of what we would expect our car to be at.

“For various reasons it’s been a tough year for Bryce, but equally, the young kid has got a huge amount of tenacity.

“We’ve also got to do a better job for him. I have faith and confidence that in a couple of months, or in the second half of the year, we’ll be in a position to look at those options.

“He’s a natural fit. He works really well culturally and it’s our focus just to get him going right, right now.

“He’s super quick and we just love the young kid, but we’re a performance industry and we’ve just got to make sure we work hard to get his car in the right spot.” 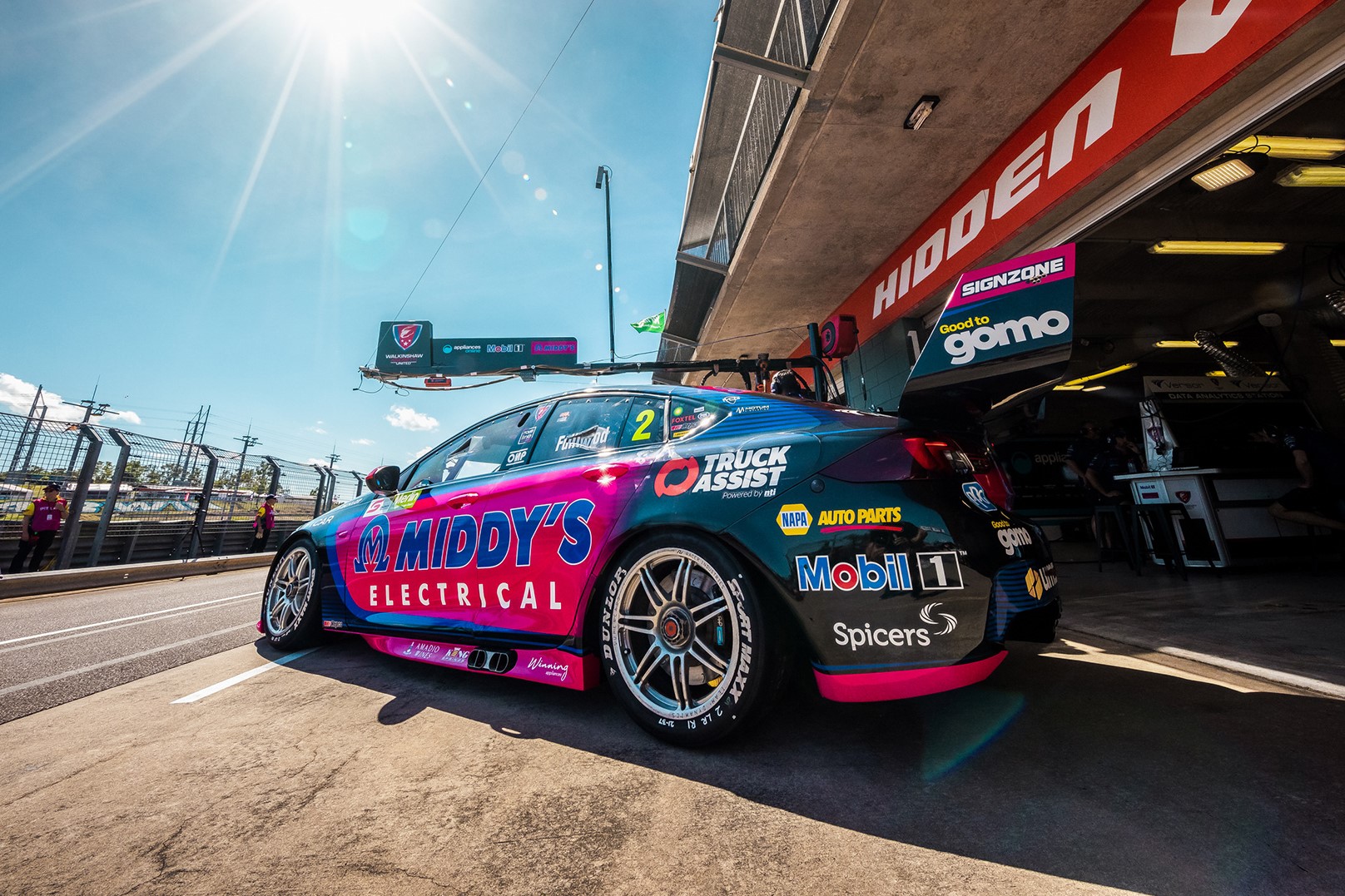 Fullwood’s rookie season with Walkinshaw Andretti United last year was highlighted by a podium finish at The Bend Motorsport Park.

Prior to joining the championship, the youngster was dominant in his Super2 Series-winning campaign with MW Motorsport in 2019.

Six wins and another five podium finishes netted him the title ahead of Kurt Kostecki and Thomas Randle, both of whom have recently made Supercars wildcard appearances.

Fullwood said he has to remind himself of his achievements.

“I feel like I’m here for a reason,” said Fullwood.

“We’ve won the right things on the way through and proven that I can do it. I’m not questioning that, it’s just trying to get everything to come together at the right time and make it happen.

“I went through a similar period last year. I started, from this point on, started to find a bit and get going a bit. Hopefully I can kind of do the same.

“It’s just one of those things. Everyone up and down the pit lane here I can see has had good and bad times in their career and it’s just how the sport is.”

The latest round of the championship, the Darwin Triple Crown, marked Fullwood’s most consistent showing this season.

However, he remains unhappy with those results when his team-mate is winning races. Further, the best of his Hidden Valley results came in a race where wildcard team-mate Kurt Kostecki placed sixth.

“Yeah, I don’t know, we’re trying hard. We’re putting in a heap of work in behind the scenes here and the same for myself. It’s not for a lack of effort or trying.

“I think we’ve got to do some work with our cars at the moment. Obviously it was awesome for Chaz to win the race [in Darwin] and capitalise on the drama, but ultimately I think we still need to get a little bit more out of our cars. In saying that, I’ve still got some homework to do too.

“I’m excited for them to be going well, but at the same time I’m certainly not happy where I am. I think last year I showed better form towards the end of last year.

“I’m a bit unhappy that I’m not there. Like I said, we’ve been doing some work behind the scenes on my side of the garage and for me personally.

“I’m putting in a heap of effort, there’s no questioning that. It’s a bit tough to take, but everyone goes through their ups and downs. I’m just hoping it’s going to turn around for me pretty soon.”

Fullwood’s next outing will be at the NTI Townsville 500 across July 9-11 at the Reid Park Street Circuit.