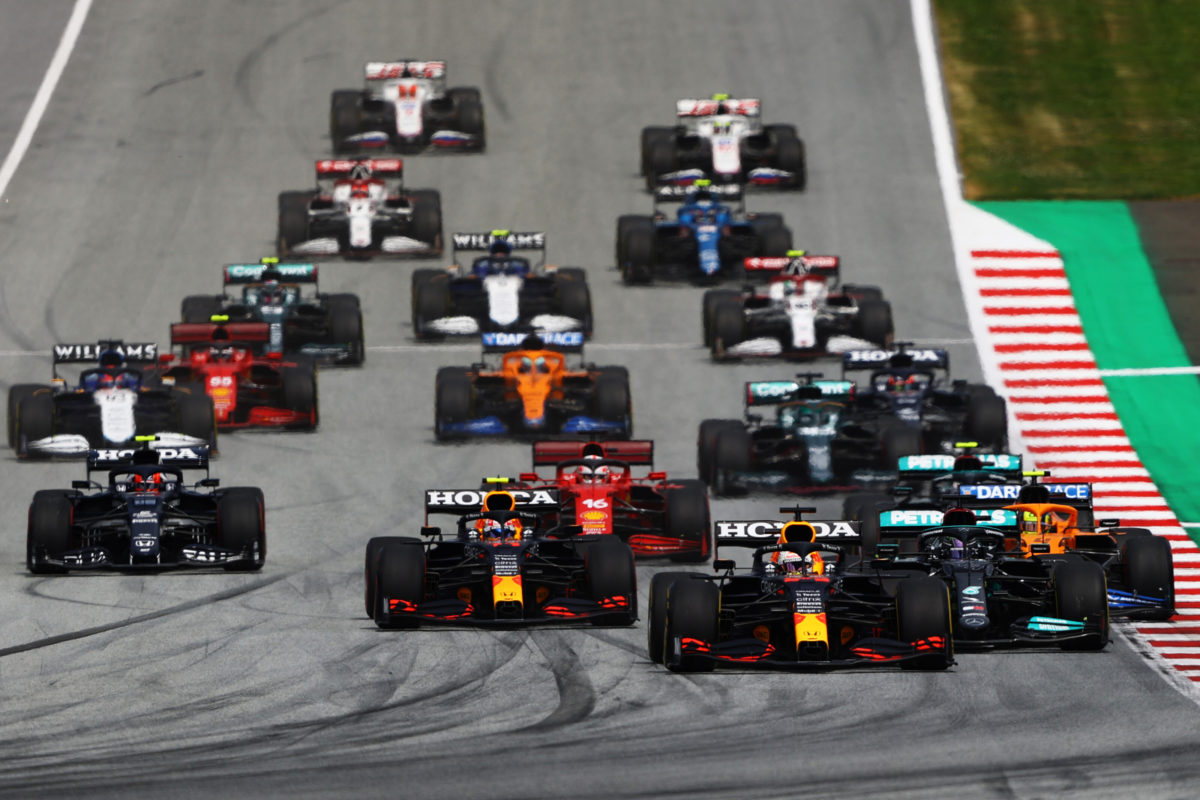 Max Verstappen has extended his world championship advantage after easing to victory over Lewis Hamilton in an uninspiring Formula 1 Styrian Grand Prix.

The Dutchman started on pole and led every lap to take a comfortable 35.7s lead over his title rival – artificially inflated by a late pitstop for Hamilton.

By then, it was clear that the Mercedes driver had no answer to the Red Bull as he looked set to trail him to the flag by 15 seconds.

Third went to Valtteri Bottas, narrowly over Sergio Perez, the pair half a lap away from Verstappen, whose pace was such that only four cars finished on the lead lap.

An even start saw Verstappen maintain the advantage from pole over Hamilton, Lando Norris and Perez dropping in behind.

The second Red Bull then drove around the outside of Norris at Turn 3 to take the place, the pair reversing that order once again a corner later.

Picking up damage in the opening exchanges, Charles Leclerc pitted at the end of the opening lap.

Also caught up in incidents were Antonio Giovinazzi, Pierre Gasly, and Nicholas Latifi, the latter two also taking to the pit lane.

It proved race-ending for Gasly, the AlphaTauri sustaining damage to the left-rear.

The Frenchman found himself twice tagged by Leclerc before reaching Turn 3, the Ferrari driver hitting Gasly’s left-rear as he looked to pull into the slipstream out of Turn 1.

Surviving the carnage around him, Daniel Ricciardo climbed four places from his start position to sit ninth.

Verstappen quickly extended a lead that saw him clear of DRS range by the time it was enabled.

Initially passed by Tsunoda at Turn 4, Carlos Sainz simply drove by the Australian between Turns 6 and 7.

“I’ve got low power, low power,” he reported back to the pits.

“We think it’s recovered,” came the response as his lap times recovered on the following tour.

Though he’d dropped four places, he remained in the same gaggle of cars trailing Fernando Alonso in seventh which accounted for almost half the field.

Perez walked through the door Norris left open at Turn 3 on Lap 10, Bottas pulling the same move a lap later as McLaren clearly elected to concentrate on its own race.

Proceedings fell into a lull thereafter, Hamilton running wide at Turn 4 and coming close to losing the Mercedes on Lap 25 the only moment of note prior to the pit stop cycle beginning.

Of the leaders, Perez was the first in the lap on Lap 26, a slow stop dropping him back on track behind Norris.

Moments earlier, George Russell had been in the pits, having run as high as eighth in the opening stint.

Problems on the right-side of the car delayed his exit, the Brit returning to the pits a lap later, the problem ultimately ending his race on Lap 38.

Mercedes boxed Bottas a lap later than Perez, the Finn able to emerge ahead of the Red Bull driver.

Next it was Hamilton’s turn, a 2.2s stop saw him easily maintain second place.

Unsurprisingly, Verstappen stopped from the race lead next time around, covering off any chance of an undercut from Hamilton.

He duly rejoined the circuit still with a comfortable advantage out front.

Norris stopped from third on Lap 31, swapping his soft compound tyres for the hards.

Sainz and Ricciardo both stopped on Lap 42, the last two runners in the grand prix to take service.

The Ferrari returned to the fray in seventh place, while the McLaren plummeted down the order to 15th.

On Lap 55, Perez stopped for a second time, a low-risk strategy as he had no pressure from behind.

The move was seemingly an effort to steal away the point for fastest lap from Mercedes, at that stage held Hamilton but was quickly claimed by the Red Bull driver.

Strong pace from Sainz in the latter stages saw the Spaniard unlap himself from Hamilton, though the Spaniard was more than seven seconds down on fifth-placed Norris and unable to mount a serious threat.

Perez was similarly rapid and threatened Bottas in the final laps, but ultimately ran out of laps.

Lewis Hamilton took to the lane at the end of Lap 69, the seven-time champ looking to claim back the point for fastest lap.

He rejoined in traffic but through it courtesy of blue flags to pave the way for a last lap flier.

The stop took all pressure of Verstappen, who won at a canter from Hamilton, the margin an inflated 35.7s at the flag.

Bottas hung on to third, Perez having closed onto the gearbox of the Mercedes but could get no closer on the final lap to confirm himself in fourth.

Hamilton did steal the fastest lap, a 1:07.058s on the final lap to pick up an extra world championship point.

Fifth went to Norris from the Ferrari duo of Sainz and a strong recovery for Leclerc.

Rounding out the top 10 were Stroll, Alonso and Tsunoda, while Ricciardo trundled home a lacklustre 13th.

Victory for Verstappen was his fourth of the season, and the first time in his F1 career that he’d claimed back-to-back grands prix.

He now stands 18 points clear in the drivers’ championship after eight rounds.

With four wins on the bounce for Red Bull, it marks the longest dry spell for Mercedes in terms of victories under the turbo-hybrid era, which stretches back to 2014.

The Formula 1 season continues with the Austrian Grand Prix from Friday, the second race in as many weeks at the Red Bull Ring.