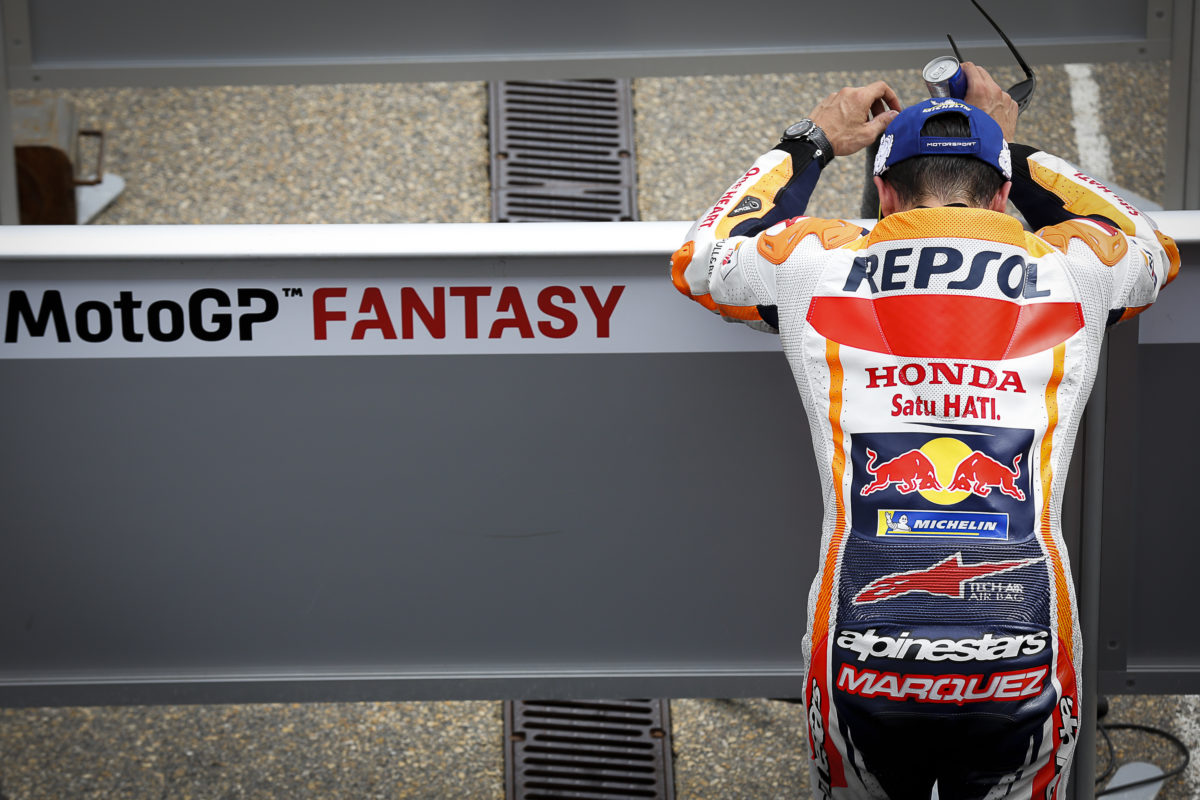 Marc Marquez post-race at the Sachsenring

Marc Marquez has opened up on the phone call which he shared with Mick Doohan following his own triumph after a major injury in the German MotoGP.

The two Honda legends can now point to another parallel in their careers after Marquez won at the Sachsenring, six rounds into his comeback from a badly broken right arm which ultimately required three operations.

The Spaniard is, of course, a six-time MotoGP champion, one up on Doohan’s haul of five in the premier class during the 500cc era.

Doohan, however, won all of those five titles after a career-threatening crash of his own, during qualifying at Assen in 1992.

The Australian broke his right tibia and then nearly lost the leg altogether when gangrene set in due to a complication arising from the surgery.

He would have both of his legs sewn together for a period of time to share blood flow and returned later that season, only losing the championship to Wayne Rainey by four points.

Doohan also came up short in 1993, but would not be denied the title for the next five years.

Marquez revealed at the Catalan Grand Prix that he had received advice from one of his predecessors at the factory Honda team as he struggled through his early rounds back from injury, although he was somewhat guarded at the time about what exactly was said.

Now, he has disclosed more about the 30-minute telephone call between the two.

“When I was injured, always I feel like I will come back and I will come back strong. But since the first time I ride the MotoGP bike in Portimao, I say ‘OK, I am far, very far from my level,” explained Marquez.

“From that point, it was very hard. The next races was even harder. It’s difficult but I just forget everything and focus on my personal and professional side. When I say forget everything; I mean extra comments, comments from outside.

“I just listen to the people that want to help me, and I try to find something or some comments that helped me – which was a phone call from Mick Doohan. I met [with] him in Mugello and I know that he had a similar situation in ‘92 and ‘93.

“It was the exact same problems like understanding the bike, not riding like you want to, stupid mistakes, stupid crashes, some races you will be fast, practice you will be slower and you don’t know why, and all the problems that I have this year – he explain and had in the past.”

Marquez also paid tribute to his entourage for their support, including the Honda hierarchy.

“When I crossed the line, I thought about all the people that helped me to be here today,” said the 28-year-old.

“From a difficult situation, it is impossible to go out alone; you need the people, the team, the doctors, the physio, the manager, the family, the friends, everybody together to help you and I find [this].

“I especially want to say thanks to Honda because the respect they give to me during all these years was something that I appreciate a lot.”

Marquez did admit, post-race at the Sachsenring, that neither his nor Honda’s struggles are over yet.

However, he now sits 10th in the championship ahead of this year’s Assen round, for which practice begins this Friday.