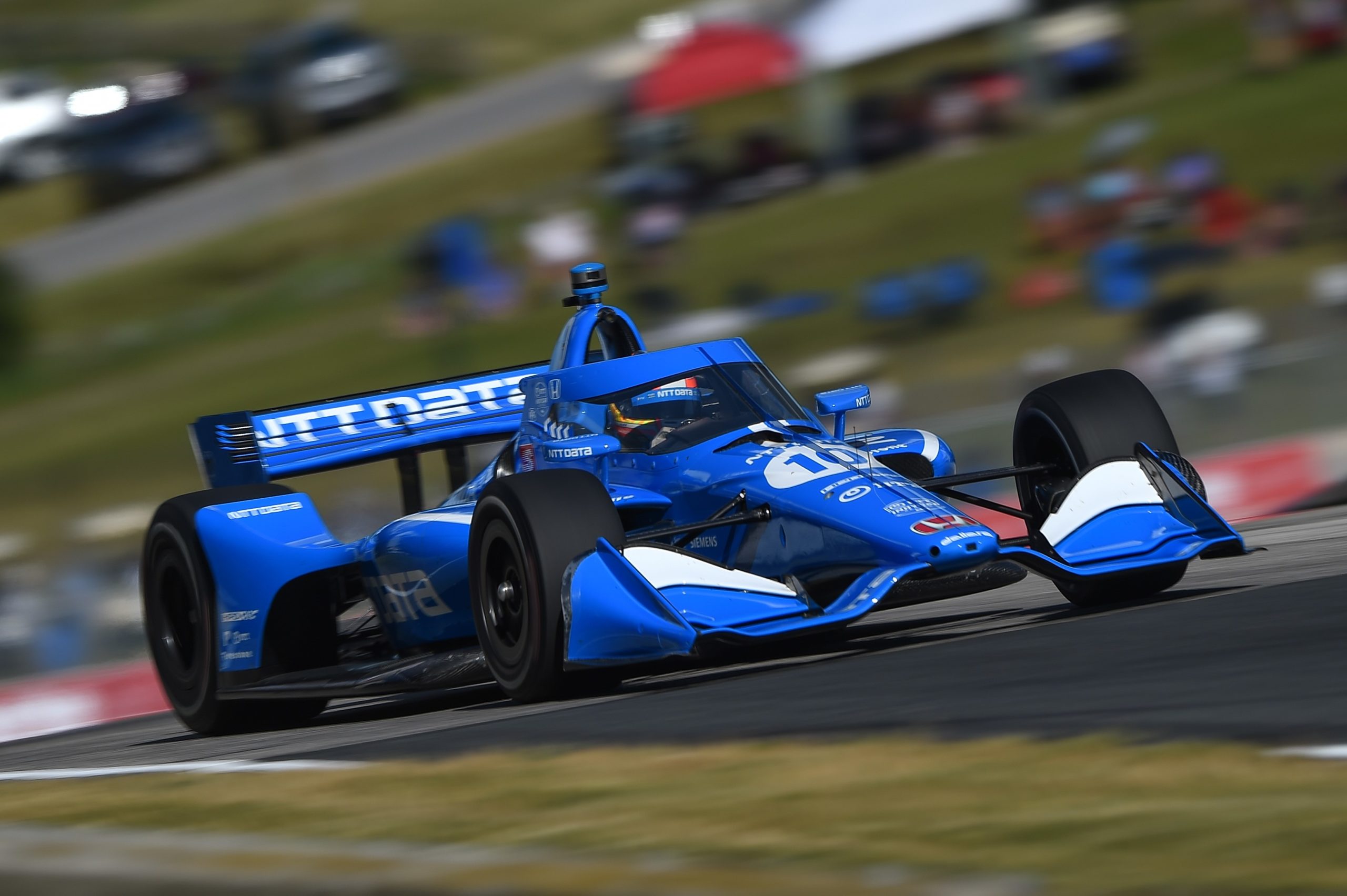 Chip Ganassi Racing’s Alex Palou scored his second win of the IndyCar Series in a dramatic end to Round 9 at Road America.

Team Penske pilot Josef Newgarden was dominant in the 55-lap affair, but fell short of his first win this season after a mechanical gremlin snuck in with just two laps to go.

It marked the second race in a row that the two-time series winner came up shy of the win, McLaren SP driver Pato O’Ward denying him a win last time out in Detroit.

“Yeah, it was amazing, we had a really good car during the race,” said Palou.

Newgarden got the holeshot into Turn 1 from pole position with Jack Harvey (Meyer Shank Racing) getting a quick getaway from third to steal second.

There was a hair raising moment for IndyCar Series debutant Kevin Magnussen early on as he bowled a wide at the penultimate corner, his McLaren SP entry going for a wild ride across the grass.

Having lost out to Palou on Lap 5, Herta ceded another position to Grosjean come Lap 11 as he struggled for speed on the soft compound tyre.

Power made quick work of Harvey after his pit stop, passing the Brit who had only just returned to the race on cold tyres.

Come Lap 13, Newgarden pitted from the lead with a sizeable lead.

Dixon finally pitted from Lap 15 after going the longest of anyone.

With the first round of pit stops completed it was Newgarden from Palou, Power, Harvey, Herta, Grosjean, Hunter-Reay, O’Ward, Rossi, and Ed Jones (Dale Coyne Racing with Vasser Sullivan).

Shortly thereafter, the first Safety Car was bought out after Chip Ganassi Racing’s Jimmie Johnson got wide out of Turn 7 and spun.

A high-speed spin into the infield resulted in light contact with the inside wall. With his car stalled, the race was neutralised to recover his car.

Racing resumed on Lap 19 with Newgarden heading the field.

Down in 16th, Scott McLaughlin (Team Penske) was engaged in a fierce fight with Conor Daly (Ed Carpenter Racing). The pair slid their way through Turn 5, the Kiwi holding sway on Lap 21.

The second Safety Car intervention came on Lap 23 when Marcus Ericsson, another of the Chip Ganassi Racing entries, spun at Turn 3.

At that time, it was still Newgarden who led Palou, Power, Harvey, and Grosjean while Herta had team-mates Rossi and Hunter-Reay in tow. O’Ward and Jones completed the 10.

Newgarden came to the pits followed by the lion’s share of the field. Magnussen and Sato opted to stay out, dropping Newgarden to third.

It was a frenetic period after the restart that saw Newgarden fight hard to keep Palou at bay for the effective lead of the race.

Meanwhile, Magnussen was struggling out in front, making a few mistakes that allowed Sato to take top spot come Lap 31.

Magnussen then pulled off to the side of the road on Lap 34, the Dane reporting a loss of power.

That brought out another Safety Car intermission.

Harvey effectively took himself out of contention when he pitted under the yellow flag, being the only drive inside the top 10 to do so.

Shortly after the race restarted, Dixon pitted on Lap 39 with race leader Newgarden coming in a lap later.

While Askew went long, Newgarden had the effective lead of the race after the pit stops with Palou behind him. Herta sat five seconds back from that pair with Power in his mirrors.

Dixon was the big benefactor of the pit stop sequence, the undercut launching him from ninth to fifth.

Yet another Safety Car came out with four laps to go after a left rear issue for Jones resulted in the Ed Carpenter Racing driver spinning and stalling.

That set up a two-lap dash to the chequered flag.

Newgarden stretched his legs as the field came to green, but his race soon came undone as the car popped and spluttered across the start/finish line.

With a massive run up to Turn 1, Palou blew around the outside to take the lead.

It soon emerged Newgarden had a problem as he began haemorrhaging positions hand over fist.

By the chequered flag, Newgarden had fallen from first to 21st. Meanwhile, Palou eased to the win with Herta second and Power third.

Dixon was an impressive fourth on a day of damage limitation while Grosjean, Ericsson, Rossi, Sato, O’Ward, and Chilton completed the top 10.

It was a quiet day for McLaughlin in 14th.

Palou’s win takes him to the top of the drivers’ points, dropping O’Ward to second while Dixon still maintains third.

The IndyCar Series returns on July 4 at the Mid-Ohio Sports Car Course.