Miller, Zarco blame Espargaro for letting Marquez get away

Miller, Zarco blame Espargaro for letting Marquez get away 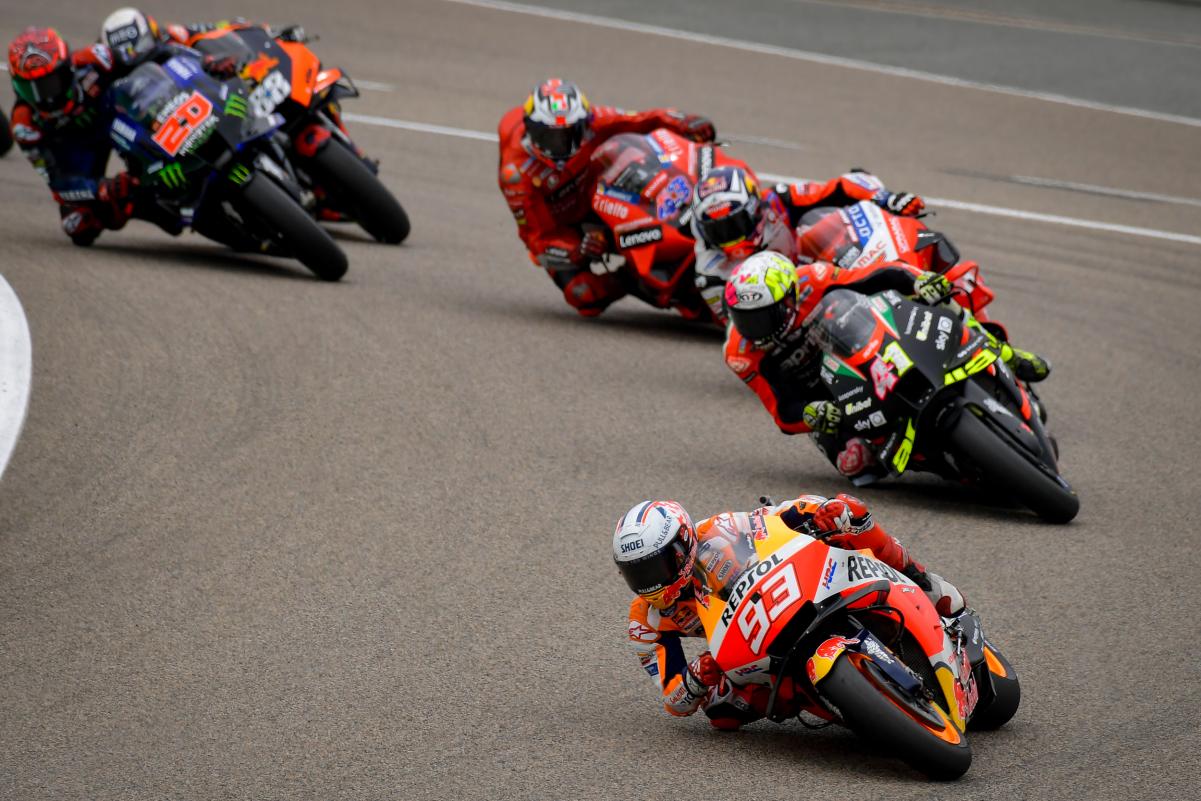 Jack Miller and Johann Zarco have blamed Aleix Espargaro for letting eventual winner Marc Marquez get away in the German MotoGP.

Espargaro had secured Aprilia’s first front row start in the MotoGP era and briefly led the race before settling into second position in the early stages, behind Marquez.

But for a busy first corner, those opening laps around the Sachsenring appeared somewhat cagey, with less than 2.6s covering the top 11 even at the end of Lap 8.

However, it was then that the rain flags began to fly and Marquez bolted, putting exactly one second on Espargaro on Lap 9.

The Repsol Honda rider’s sudden push injected a sense of urgency into the contest, with Miller going down the inside of Espargaro on Lap 10 at Turn 1.

The Australian would soon himself be overtaken by Red Bull KTM’s Miguel Oliveira, and ultimately faded to sixth as he wanted for grip in the closing laps.

Oliveira managed to bring Marquez’s advantage down from 1.8s to less than one second with five laps to go, but the six-time MotoGP champion was able to respond.

Miller was blunt in his assessment of the situation.

“I feel like I rode a smart race and didn’t make any mistakes,” said the Ducati Lenovo Team rider.

“I was there the whole time, but today was just not our day.

“It was the day of Marc Marquez and he did a fantastic job. He managed the race really well and that’s why he’s a multiple times world champion.

“He saw the spots of rain and boom, he was able to put a big gap into everyone else because we got held up by someone who wasn’t willing to push in those conditions.”

Zarco had followed Espargaro for the first seven laps but ended up getting shuffled back himself and finished eighth, one position behind the #41 Aprilia.

He said not being able to get by earlier on was crucial.

“A key point in the race was to overtake Aleix Espargaro,” said the Pramac Ducati pilot.

“When Marc began to go away with a bit of rain, he took the advantage.

“I really tried to overtake Aleix, but I lost some time there.

“In the second half of the race, things were pretty difficult, and the rear tyre on the left was dropping a lot.”

Oliveira explained that his late-race fade-out, when his deficit to Marquez doubled from one second to two in the last few laps, was due to having to push his KTM so hard in a bid to catch #93.

“Of course, the key moment of the race was when the rain came down and as we know Marc was able to understand quite quickly the grip level and he made the gap there,” recalled the Portuguese rider.

“I was not in the ideal situation because I was not at that moment right behind him, and I got stuck in this little group where he got a gap to.

“Then when I got to the second place I tried hard. I put the pressure on him, I did the best I could, but I didn’t have the best situation to manage the tyre because I used a lot to try and get to him.

“I felt like he was in control the whole race. He pushed a little bit more when I was completely empty. This made my race decision easier and he pulled a gap to 1.5s.

“From then on I decided to bring the bike back to the garage and save this second place.”

According to Espargaro, he was simply unable to match the grip of those around him.

“I won’t say we were unlucky today because it was the same for everyone,” said the Spaniard.

“But when the rain started, I wasn’t as brave as him. I had a big moment in Turn 8 where I almost crashed but saved it, and then I decided to slow down the pace a little bit, and I lost a lot of my options there.

“In the end, the problem is that I was risking a lot on the brakes but I don’t have the traction.

“I don’t know what happened but it was crazy; I couldn’t follow them because they had so much more traction than me in the middle of the corners.

“I risked everywhere trying to recover, but it’s always on the limit.”

Aprilia has been the big improver of the 2021 season to date, albeit off a very low base.

The Noale marque, the only manufacturer still with concessions, nevertheless remains without a podium and Espargaro admits it is still far away from where it needs to be.

“I’m a little bit angry today because I’m trying everything,” he remarked.

“I’m a little bit happy, because at the end of the race I could touch Fabio [Quartararo, championship leader] with my hand, who was on the last step of the podium. But it is not enough.

“I want to fight for the podium but the reality is that we are not ready. We can dream about it, we can speak about it, but we still need more.

“I’m disappointed because I was expecting a much better position than seventh place.”

The MotoGP season continues this coming weekend (June 25-27) with Round 9, the Dutch TT, at Assen.