Mercedes ‘had no choice’ in French F1 strategy call

Mercedes ‘had no choice’ in French F1 strategy call 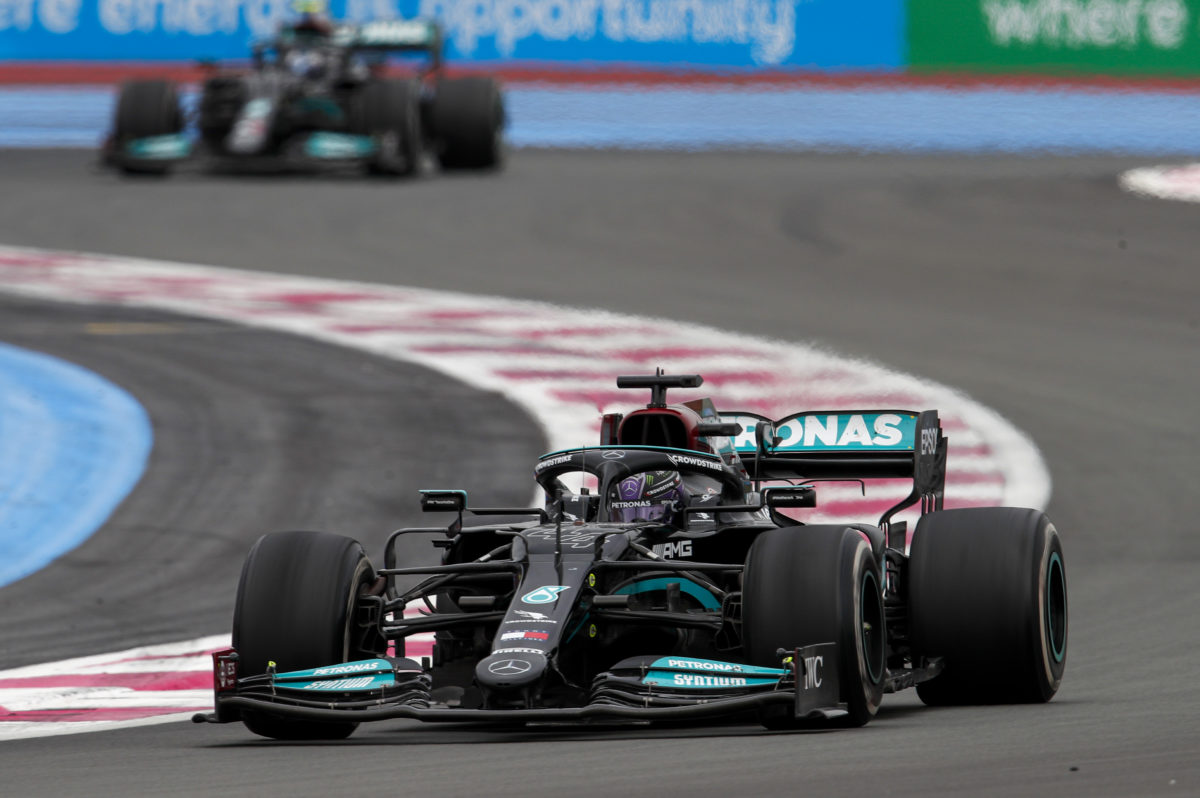 Mercedes “had no choice” but to adopt a compromised strategy during the Formula 1 French Grand Prix.

Lewis Hamilton and Valtteri Bottas stopped just once during the course of the 53 lap encounter in Paul Ricard to finish second and fourth respectively.

That came despite running first and second late in the piece before ceding places as they both struggled for grip.

The decisive moment came more than half the race earlier, when Valtteri Bottas locked up sufficiently to cause significant vibrations in his Mercedes.

With concerns surrounding the impact that could have on his suspension, the Finn was called into the pits, triggering a flurry of stops that would ultimately compromise Mercedes’ race.

Typically, the Anglo-German operates a philosophy of pitting its lead car first, which in this instance would afforded Hamilton the opportunity to cover off the undercut from Verstappen.

“We had no choice, Valtteri’s tyre had started to have a vibration,” team boss Toto Wolff told Sky Sports.

“Towards the end [of the stint] we were really worried – that vibration came through the suspension already – he could have had a failure at any time because he flat spotted the tyres.

“We knew that we were going to trigger the stops too early, but [had] no choice.”

Bottas ran a close third to Verstappen throughout the opening stint, taking service on Lap 17.

The Red Bull driver took to the lane a lap later to cover off the undercut, while effectively performing the same trick on the race leader.

Hamilton stopped on Lap 19, though his title rival’s out lap pace was such that he lost track position.

Bested at that juncture, Mercedes then faced the quandary as to whether it should stop a second time.

Verstappen and Red Bull pulled that trigger on Lap 32, the Dutchman dropping to fourth but chasing back to the race lead courtesy of tyres some 13 laps newer than Hamilton’s.

The Mexican had stopped on Lap 24, seven laps after Bottas and five later than Hamilton, affording him more pace in the final laps.

“Probably [a] two-stop [strategy] would potentially have done the job but it was not on the cards at all for us, so we’ll do some analysis and try and figure out why,” Hamilton said.

The seven-time champ trailed Verstappen when the Dutchman pitted for the second time, and with the power of the undercut, and presence of Perez in fourth, Mercedes hands were strategically tied.

Stopping either of its drivers for a second time would have cost them track position, placing them behind both Verstappen and Perez heading into the closing stages of the race.

Instead Mercedes opted to leave both out, a decision that angered Bottas, who made his feelings known to the team.

“Why the f**k does no-one listen to me when I say this is going to be a two-stopper,” he questioned over the radio.

“The winning strategy today was two stop,” he then added following the race to Sky Sports.

“Easy to say afterwards, but that’s how it is.

“I think as a team we’re too focused on completing the one stop thinking is the best, but it wasn’t.

“I had no front tyres left for the last 10/15 laps or so it’s really trying to get the car home.

For Bottas, it was a result which came after he’d shown strong pace on Friday, backing it up during Saturday’s running.

He then appeared to match Hamilton in the opening phase of the race, only for both to be out-foxed by Red Bull.

It was a strategy reminiscent of that used by Mercedes in Spain when it switched Hamilton to a two-stop race to claim victory.

The result means Red Bull has extended its lead in the constructors’ championship by 11 points, the margin now 37 at the top of the standings.

Formula 1 next heads to the Red Bull Ring for the Styrian Grand Prix, followed a week later by the Austrian Grand Prix at the same venue.

Free Practice is set to commence at 19:30 AEST on Friday.