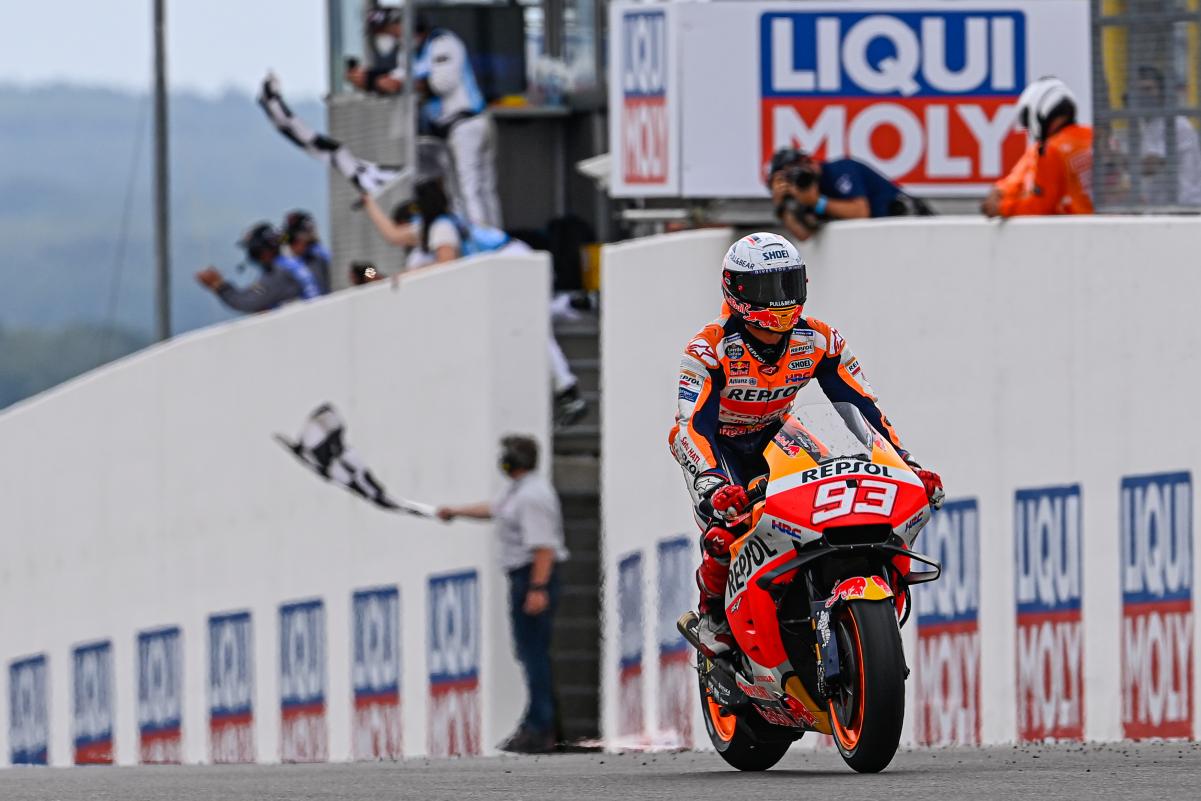 Marc Marquez has won for the first time since the shocking crash which broke his arm almost a year ago and sidelined him until early this MotoGP season, in Germany.

The six-time premier class champion led for almost all of the 30 laps around the Sachsenring, but he was made to work for it by eventual runner-up Miguel Oliveira.

Marquez’s victory is his and Honda’s first since the 2019 season finale at Valencia, 581 days earlier, and also extended his winning streak at the Sachsenring to 11 in all classes, including the last eight in MotoGP.

Brad Binder made it two Red Bull KTMs in the top four, ahead of Ducati Lenovo duo Francesco Bagnaia and Jack Miller, who swapped spots on the final lap.

When the lights went out, Quartararo made the best start of those on the front row but it was Aleix Espargaro (Gresini Aprilia) who had the inside line for the first corner.

The latter therefore took the lead while Marquez (Repsol Honda) made a forceful move for second position, which held up Quartararo and allowed pole-sitter Johann Zarco (Pramac Ducati) to take third.

Marquez passed Espargaro at Turn 13 on Lap 1, then re-passed him almost as soon as the Aprilia rider put a move on #93 next time around at Turn 12.

Miller had emerged fifth from the opening corners and, after one unsuccessful attempt, overtook Quartararo for fourth on Lap 3 at Turn 1, then Oliveira got by #20 at the end of Lap 4.

In what was still a tightly bunched top eight, Miller made a bold Lap 8 move on Zarco at Turn 1 and was soon pressuring Espargaro for second spot.

Marquez turned the wick up on Lap 9, quickly pushing his advantage past one second as light rain briefly fell around the Sachsenring.

Either or both of those developments injected a sense of urgency into the contest, with Oliveira passing Zarco for fourth at Turn 12, Miller passing Espargaro for second at Turn 1 on Lap 10, and Oliveira scything past #41 also at the next corner.

Quartararo grabbed fifth from Zarco on Lap 10 at Turn 13, before Oliveira took second position from Miller almost a lap later at Turn 12.

Marquez was by then 1.8s up the road, but the KTM rider would start to chip away at that advantage as he dropped Miller.

The gap from #93 back to Oliveira fell below 1.5s on Lap 19 and it was less than a second with five laps remaining, but the Honda rider was able to fashion a response.

Marquez was more than a second ahead again with three laps to go, then almost two seconds up at the start of the final lap, before taking the chequered flag for a famous victory.

Oliveira was 1.610s back at the line, and Quartararo more than five seconds further behind in third.

The Frenchman had cleared Espargaro on Lap 17 at Turn 12, and passed Miller on Lap 19 at the same corner, but made no more progress on the timing screen.

Binder needed a couple of attempts to pass Zarco before picking off Espargaro on Lap 23 and Miller on Lap 27 to claim fourth.

Bagnaia had only started 10th, dropped as far back as 16th on Lap 3, and did not get back into the top 10 until he overtook Pol Espargaro (Repsol Honda) on Lap 19.

However, the Italian had been able to make his rubber last, and relieved Miller of fifth position at Turn 8 on the final lap.

For the Australian, sixth position at the chequered flag meant he held on to third in the championship, but is now 31 points behind Quartararo.