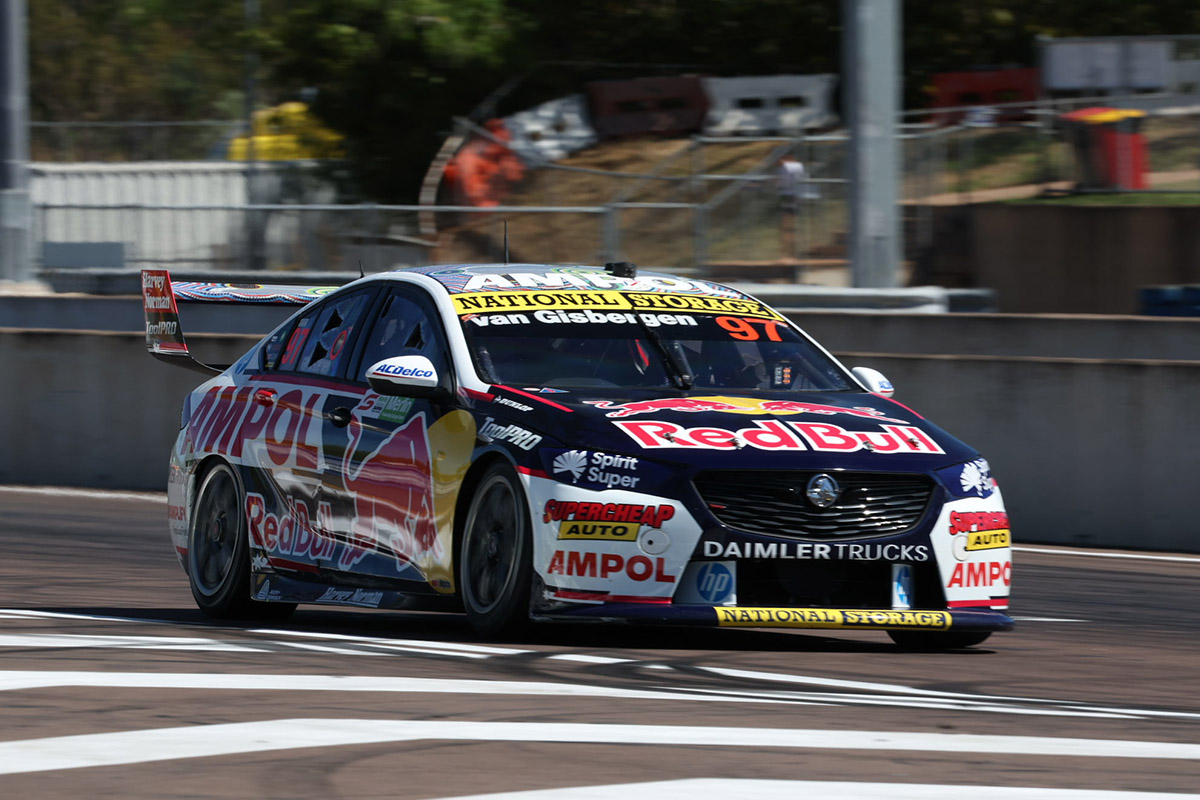 Shane van Gisbergen has taken an effective lights-to-flag victory in Race 13 of the Repco Supercars Championship at the Merlin Darwin Triple Crown.

The Red Bull Ampol Racing driver qualified second but got the jump on pole-sitter Will Davison at the start and those two would remain positions, compulsory pit stop cycle aside, for the remainder of the 38-lap encounter at Hidden Valley Raceway.

The battle for the final step on the podium, on the other hand, was only resolved in the final four laps when Jamie Whincup made a pass on Chaz Mostert which decided who of those two sits second in the championship for at least the next handful of hours.

For van Gisbergen, the result still does not completely wipe out the disappointment of his own costly pit stop drama, while leading, on the afternoon prior.

“It was awesome, got another good start which was great and Red Bull Ampol Racing, our car was awesome,” he said.

“We just needed to get things right today; pit stop was great and just managed the race at the end. Awesome. But it hasn’t made up for yesterday yet and we’ve still got this arvo to go.”

He added, “We move on with things quick. We analysed last night what happened and put procedures in place to make sure it doesn’t happen today, and a fallback plan if it does, and it didn’t.”

Back at the start of Race 13, van Gisbergen (#97 ZB Commodore) made a slightly better secondary launch than Davison and was able to cover the #17 Shell V-Power Mustang on the run to the first corner.

However, the former got loose and that delayed both he and Whincup, meaning they exited the corner behind Dick Johnson Racing team-mates Davison and Anton De Pasquale (#11 Shell V-Power Mustang), respectively.

Behind, Mostert (#25 Mobil 1 Appliances Online ZB Commodore) settled into sixth one he wrested that position from Will Brown (#9 Ozland Group Solutions ZB Commodore).

The rest of the top 10 towards the end of Lap 1 was Cameron Waters (#6 Monster Energy Mustang) in eighth, from Nick Percat (#8 R&J Batteries ZB Commodore) and Jack Le Brocq (#5 Truck Assist Mustang).

Van Gisbergen led by more than a full second after six laps, and more than two seconds after 10 laps.

Mostert and Brown, among others, pitted on Lap 9, before De Pasquale peeled off from third, at a 2.9s deficit to the lead, on Lap 10.

However, De Pasquale would be held up when the button reportedly fell out of the rattle gun which was being used to change the right-rear, and he was passed by Mostert as he rejoined the race track.

With fresh rears, Mostert reset the fastest lap, which had been held by van Gisbergen, on Lap 11 and again on Lap 12.

Davison pitted from almost 2.5s behind van Gisbergen on Lap 12 and was followed into the lane by Winterbottom, with Mostert splitting them on exit to effectively take third position off #18.

Van Gisbergen made his compulsory pit stop at the end of Lap 14 and still had almost three seconds on Davison when he popped back out.

However, that margin fell over the laps which followed, as van Gisbergen reportedly complained of some sort of noise coming from Car #97, and Triple Eight Race Engineering got another tyre ready.

Whincup and Percat were officially first and second when they pitted on Lap 20 and the former was able to get out between Mostert and Winterbottom, meaning #88 was up to an effective fourth position.

Van Gisbergen led at that point by 1.3s over Davison, who had shaken Mostert after coming under pressure from the Race 12 winner for a number of laps.

Mostert instead had to worry about the presence of Whincup in his own mirrors, with fifth onwards being Winterbottom, De Pasquale, Waters, Brown, James Courtney (#44 Boost Mobile Mustang), and Percat.

Whincup showed the nose at the Turn 6 hairpin on Lap 34 but it was not until the next lap that the move got done.

Even then, it took several corners, with the seven-time champion going very deep at Turn 1 and only making third position his own for sure at Turn 5.

Van Gisbergen won by an official margin of 1.5327s, with Davison just over five seconds up on Whincup at the chequered flag.

Mostert grabbed the five bonus points for the fastest lap and is thus still only three points behind Whincup in the championship, but the latter is now 207 points adrift of his team-mate.