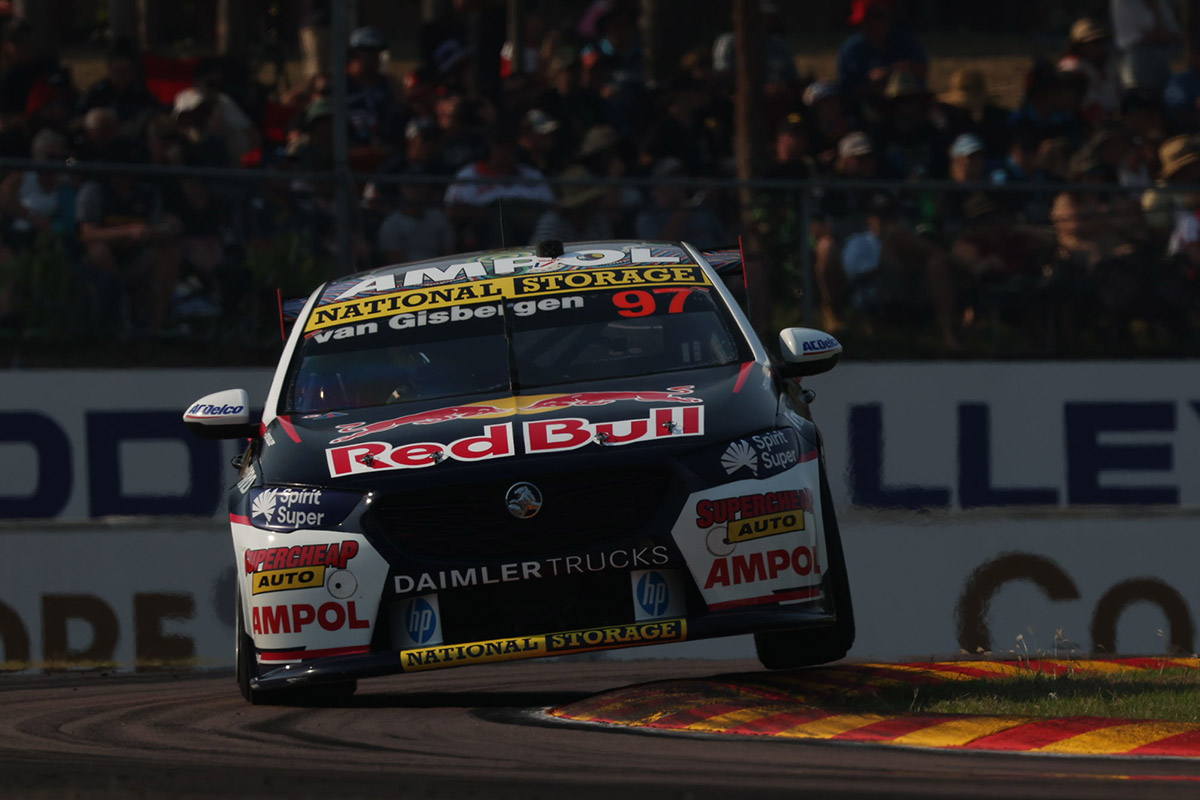 As the Red Bull Ampol Racing driver did in Race 13, he got the jump on pole-sitter Will Davison and effectively led all 38 laps in Race 14 of the season at Hidden Valley Raceway.

The top four at the finish was also a repeat, with Davison second in his #17 Shell V-Power Mustang, Jamie Whincup third in the #88 Red Bull Ampol ZB Commodore, and Chaz Mostert one position off the podium in the #25 Mobil 1 Appliances Online ZB Commodore.

After his eighth win of the campaign, van Gisbergen’s lead on the points table is 221 over Triple Eight Race Engineering team-mate Whincup, with Walkinshaw Andretti United’s Mostert a further nine behind in third.

“Again at the start, I don’t know what’s happened, I got three beauties and yeah, just managed the pace and drove away when tyres were nice.

“Man, I’ve got to thank Red Bull Ampol Racing; our car wasn’t very good and we just chipped away.

“All weekend it’s been really good from the races, so just stoked, it’s awesome.”

When the lights went out, #97 made a good start from the outside of the front row and took a clear lead to the first corner.

Whincup tried to go to the outside of the Dick Johnson Racing Fords Davison and Anton De Pasquale (#11 Shell V-Power Mustang) which ran second and third respectively, but got hung wide through and exiting Turn 1.

He dropped back to seventh as a consequence, with fourth through sixth being James Courtney (#44 Boost Mobile Mustang), Nick Percat (#8 R&J Batteries ZB Commodore), and Scott Pye (#20 DeWalt ZB Commodore).

Whincup went down the inside of Pye at on Lap 3 at Turn 1, then got Percat at the same corner a lap later, with a little tap on the way through.

Van Gisbergen appeared to be backing up the DJR Mustangs in the early stages but pulled a second clear on Lap 6 and doubled that margin in another six laps.

Meanwhile, Winterbottom pitted from eighth on Lap 5 and Percat from sixth on Lap 8, each for another set of rears.

At the end of Lap 14, De Pasquale peeled off from third and Whincup from fifth, the former taking on working side tyres.

They exited the lane in reverse order after the former stalled at the drop, and #11 also lost positions to Percat and Winterbottom by the time he came up to speed.

Davison was 2.4s back from van Gisbergen when he pitted on Lap 15, resuming ahead of Whincup and therefore still in an effective second position.

Team-mate De Pasquale, however, ceded another four positions when he lunged at Winterbottom on Lap 17 and sailed off the race track at Turn 1.

Van Gisbergen and Mostert, the latter officially fourth, stopped at the end of Lap 17, rejoining eighth and 11th respectively, with Davison and Whincup between.

As was also the case in Race 13, Davison gained ground on #97 after the stops, the gap falling below one second within five laps.

The new official leader, Courtney, continued to circulate until Lap 25, but the longer first stint did not seem to cost him too much when he popped out between Mostert and Percat, and thus effectively fifth.

In another repeat of Race 13, the CPS cycle completed when Pye took service at the end of Lap 27, and that was when a problem with the left-rear wheel nut cost him time.

With the order cleansed, van Gisbergen’s advantage over Davison was just above 1.0s, while Whincup held third.

Waters grabbed eighth when he dived past Slade on Lap 29 at Turn 6, while van Gisbergen’s lead was back above 1.5s as the race ticked into the final five laps.

Randle ran wide at the final corner on Lap 33 and while De Pasquale passed him up the main straight, the Tickford driver reclaimed 11th spot immediately with a bold move under brakes at Turn 1.

Van Gisbergen was continuing to pull away from Davison, and they were separated by 2.3207s at the chequered flag.

Whincup and Mostert were each less than a second further back at the finish, with Courtney fifth.

Rounding out the top 10 were Percat, Winterbottom, Waters, Slade, and Brown, the latter of whom got the fastest lap bonus points for the first time.

All 26 starters completed all 38 laps except for Andre Heimgartner, who retired with suspension problems in the #7 Ned Mustang.