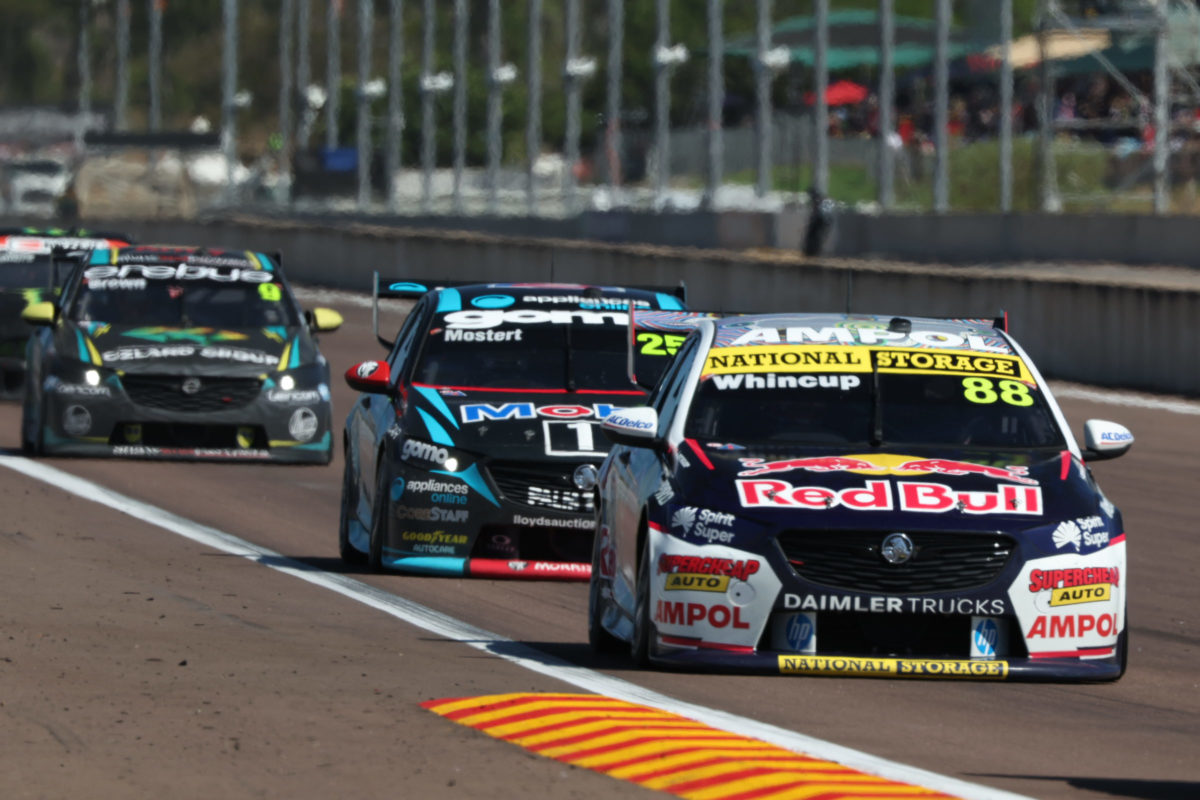 Jamie Whincup runs ahead of Chaz Mostert at Hidden Valley

Jamie Whincup and Chaz Mostert have given a glowing account of each other after their intense battle for third place in Race 13 of the Repco Supercars Championship.

The duo duked it out for several laps in the back half of the 38-lap affair won by Shane van Gisbergen, the second of three heats at the Merlin Darwin Triple Crown.

Having come close to passing the #25 Walkinshaw Andretti United Commodore on Lap 34 after launching a move down the inside at the Turn 6 hairpin, Whincup eventually found a way by the following lap.

It didn’t come easy though; Whincup having a big dive into Turn 1, only for Mostert to execute the criss-cross before the #88 driver hung on by virtue of holding the inside line into Turn 5.

Both drivers spoke highly of the exchange post-race.

“I tell you what, he was breathing down my neck for a lot of laps,” said Mostert, who held off Mark Winterbottom for fourth.

“Look, obviously a little bit disappointed for us and our team, getting so close to the podium and just to miss it by a couple of laps.

“I tried everything I could, it’s always a pleasure racing Jamie, he puts the car everywhere he needs to – that’s why he’s a seven-time champion of this sport.

“Probably one of the best battles I’ve had this year.

“A bit gutted for our team, I think we did everything right in that race. We’re still just missing a little bit with the car but we can hold our head high because I think we did a pretty good job from starting eighth.

“Obviously that’s the one thing, you’ve got to qualify in this game and that’s probably been our Achilles heel this weekend.”

For his part, Whincup returned the favour by heaping praise on the Saturday race winner.

“We were able to have a good stint in the middle there which allowed us to stay out, and then slightly better tyres to the end,” he said.

“Had a good battle with Chaz, he’s good to race with, nothing stupid, no swerving under brakes or anything so it was nice to have a good race at the end there.

“It’s good, you can race. If Chaz had have moved over [when he dived at Turn 1], we would have had a collision, and who knows what could have happened? So good battle.”

Whincup will start Race 14 this afternoon from fourth position, while Mostert has his work cut out after qualifying 10th.

The event finale will get underway at 15:25 local time/15:55 AEST, with Shell V-Power Racing Team driver Will Davison to again start from pole thanks to a record lap.