Mostert, Waters relieved to survive each other in race of drama

Mostert, Waters relieved to survive each other in race of drama 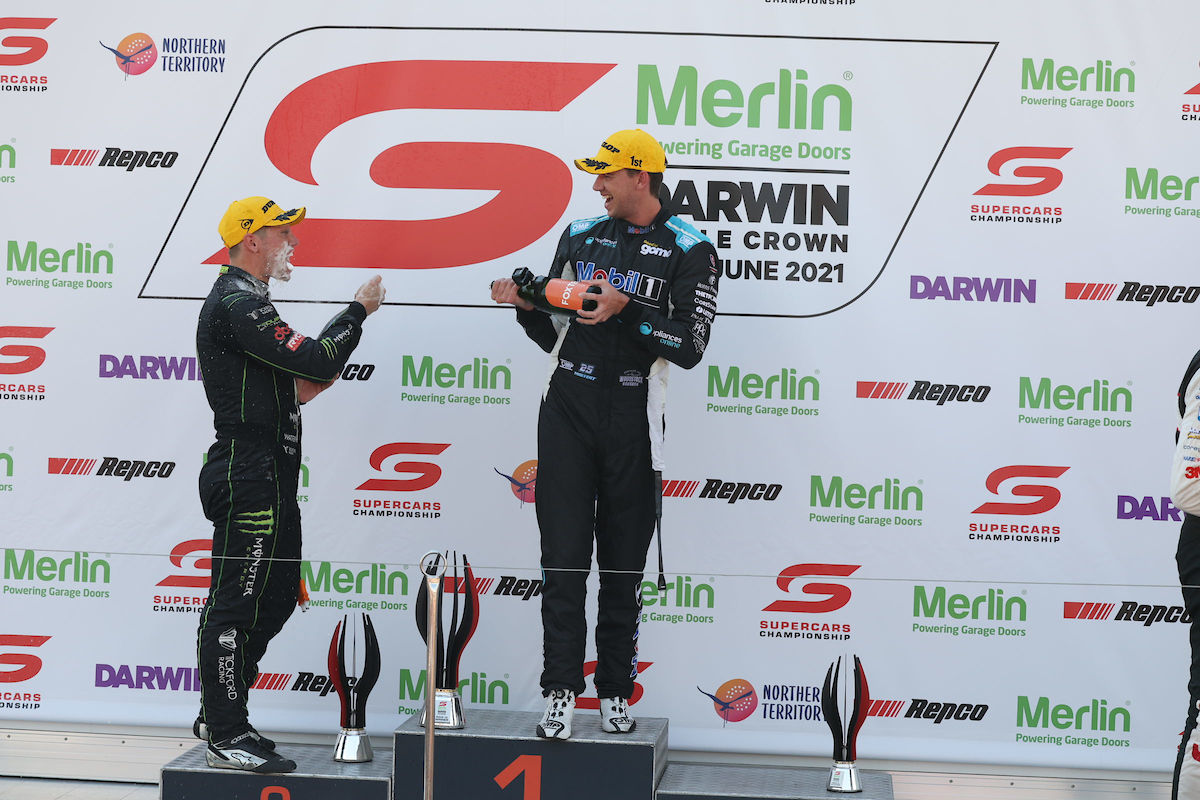 Chaz Mostert’s and Cameron Waters’ starting positions made for an amusing footnote after they finished first and second respectively in Race 12 at the Merlin Darwin Triple Crown.

The two of them shared Row 4 and, despite their notoriety for frequent run-ins with each other, were major beneficiaries of a melee just ahead of them at the first corner of the Hidden Valley opener.

Mostert emerged third and Waters fourth after the carnage which accounted for pole-sitter Anton De Pasquale, among others, and continued to keep their noses clean when several others could not.

“Obviously, starting eighth, I didn’t expect to be up here today, and starting next to Cam, you never expect to get anywhere.

“Overall, pumped to get through Turn 1 without hitting Cam, and then coming out and seeing some other people have some bad luck for a change…”

Waters also made light of the situation, revealing, “Both our teams were shitting themselves, just quietly.

“We just laughed and said, ‘Leave it to us, we know what we’re doing,’ so we didn’t know how it was going to go, but we managed to get through and it’s nice to get to the other end of the race with clean cars.”

On a more serious note, Mostert was pleased with the performance of his ZB Commodore, although he admitted he probably did not have the pace to match early race leader Shane van Gisbergen before the Triple Eight driver’s bungled pit stop.

“Obviously it’s great to come out in third [after the first-corner incident] but at the end of the day, we had a really fast race car,” said the recently re-signed Walkinshaw Andretti United driver.

“That first stint, our car was awesome, I was able to race Nick [Percat] and get a little bit of a run on him, but I don’t think I would have had much for Shane

“He was really quick but obviously he had the bad luck today as well, so we’ll take them while we can get them.”

Mostert admitted that his qualifying set-up still needs work, but hailed the turnaround from the most recent event.

“I really wanted to keep pushing all the way to the end to see if we could try and learn something tomorrow,” he explained, after winning Race 12 by over 12 seconds.

“After Tailem Bend, where we really struggled to get the car in the top five, and go back and assess what was quite wrong with the car and [how] our philosophy went wrong there, and reset and come back here and have a fast race car.

“Obviously, we didn’t qualify very well, which is something we need to work on for tomorrow, but our race car was really good.”

Waters had a somewhat similar story.

“Absolutely rapt with that,” declared the Tickford Racing driver.

“We’ve been struggling all weekend with the car; rolled out and it was pretty bad but we’ve really worked hard to get it to a good little window.

“We’re definitely top five pace but Chaz and I guess Shane had a bit over me, so we’re a lot happier, we’ve still got a little bit to find, but just to come out, and have a little bit of luck go our way for a change, is a breath of fresh air.”

The Mustang driver admits, however, that he is uncertain about finding the gains that he needs this weekend.

“I think we’ve got a clear idea of what we need to fix,” explained Waters.

“If we can fix it or not is probably another thing, but we’re definitely going to try a few things and learn from it, and we’ll come back next round, if we can’t fix it, stronger for sure.

“I think we’ve got a pretty clear idea of what we need.”

Mostert and Waters sit third and fourth in the championship respectively, the former 26 points ahead of his old team-mate and now just two behind second placed Jamie Whincup.