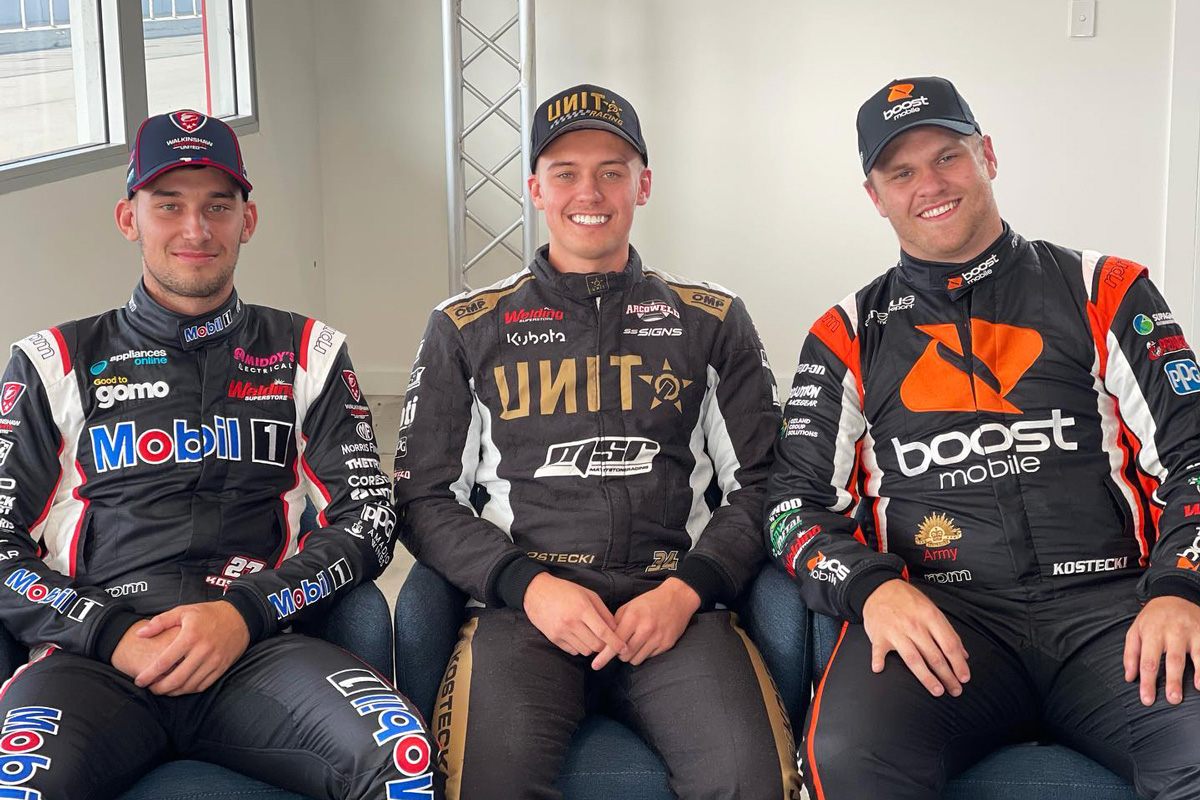 The pair crossed the finish line sixth and seventh respectively in what was a frenetic opening account in the Merlin Darwin Triple Crown, and have since gained a position each courtesy of a five-second penalty issued to James Courtney.

They could yet be elevated to fourth and fifth, pending the outcome of a stewards hearing last night into an alleged tyre pressure breach for third-place finisher Nick Percat.

Jake led the duo for Matt Stone Racing while Kurt finished the race just two seconds in arrears behind the wheel of the Walkinshaw Andretti United wildcard entry after 38 laps.

It marked the best finish for either driver in their short Supercars careers to date.

For Kurt, it was a strong turnaround after two troubled practice sessions on Friday in which he was only 19th and 26th.

“Practice 1 wasn’t that kind to us, but we put in a lot of work overnight,” Kurt told Speedcafe.com.

“I didn’t really sleep last night too much just because I knew there was so much to work on.

“I just stayed up late looking at data, looking at vision, just doing whatever I could to make sure I knew before I went to bed what I needed to do today.

“In quali it seemed to be a big benefit. In the first run I was a bit worried and then it got better and better, so it came to me a bit more so I was pretty happy that we put some work in.

“In the race we obviously got lucky that at Turn 1 we were in the right place but then just had good car speed as well in the clear air, so pretty rapt to get a good result.

Kurt was the second best of the Walkinshaw Andretti United trio while team-mate Chaz Mostert won Race 12 and hometown hero Bryce Fullwood was on the fringe of the top 10 in 11th.

Kurt said it’s been beneficial to be working with the pair, and hopes what few performances he has as a wildcard will put him in the frame for a full-time drive in 2022.

Following this weekend’s Darwin Triple Crown his next appearance will come at the Bunnings Trade Perth SuperNight, his home event, on September 11-12.

“It’s good to be able to work with both of them,” he said of Mostert and Fullwood.

“They’re both very switched on with the car and it helped me a lot [Friday] as well to get it back to where I was, so yeah I’m just doing what I can and trying to get the most out of it.

“I think in this sport self-doubt can creep in real quick when you are not getting the results and obviously not doing much last year seemed to have hurt me a lot in terms of getting back up to speed.

“Driving a T8 car most of DVS [Super2] life and getting into a new car, it’s a whole new learning for me.

“It has taken a bit but I feel every time I sit in the car it’s a bit nicer, I understand things a bit more and we’re making some good adjustments.

“The team I’ve got down here, we’re down the end of pit lane but it’s a three-car team so it’s a big team effort from everyone.

“Hopefully this sort of performance puts me in the picture for a full-time drive in 2022.”

One garage across from him, brother Jake was elated to claim a breakthrough top 10 finish.

It’s the second time this year that Matt Stone Racing has had a standout showing, the first coming from Zane Goddard at the Tasmania SuperSprint.

Having started 11th, Jake made his way to fifth place before ceding two positions in the pit stop sequence.

Jake noted cousin Brodie Kostecki who was also a standout performer. He had been running fourth before shortcutting Turn 6 after contact with Courtney late in the race resulted in a five-second post-race penalty.

That dropped the Erebus Motorsport driver to ninth, which has since become eighth, meaning history was still made: it’s the first time in Supercars Championship history that three family members took top 10 finishes in the same race.

“I got a good start initially,” said Jake.

“We qualified 11th but we knew we had the pace to actually sort of be up there a bit more.

“I got a good start and got on the inside of everyone and everyone went like a funnel to the outside.

“That was pretty good there and I sort of just kept my own and started following Waters at the start and had the pace with him there.

“I think we might have stayed out a little bit too long and I overshot the box a bit, so I think we could have finished two spots higher there.

“We should have got Brodie [Kostecki] and even, could have got all of those guys in front of me there, but yeah we had good race pace.

“We knew we had it in us because we tuned it up overnight, we’ve just got to do it all again.”