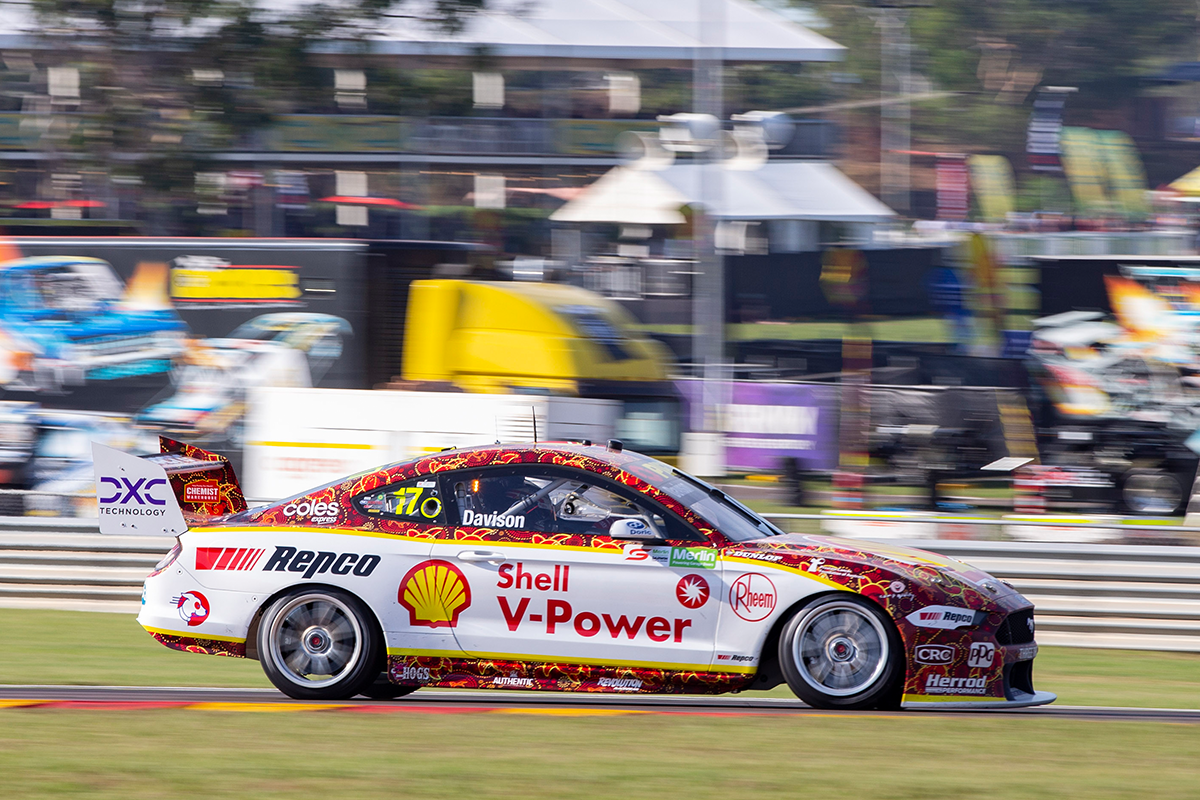 Will Davison has stormed to pole position for both Sunday races at Supercars’ Merlin Darwin Triple Crown with new practice/qualifying records in each session.

Davison’s first pole since his return to the Shell V-Power Racing Team this year was achieved with a 1:05.0575s in Qualifying for Race 13 at Hidden Valley Raceway.

On each occasion, Red Bull Ampol Racing’s Shane van Gisbergen was best of the rest, and on each occasion he split the two Dick Johnson Racing entries given Anton De Pasquale was third both times.

The result was a big turnaround for Davison, who was bundled out of knockout qualifying at the first hurdle on the day prior while his team-mate took pole.

“For me, I’ve had a tough couple of days,” he admitted.

“Anton pole yesterday, I didn’t sleep much last night, getting down on myself.

“It’s such an honour to drive the #17 Shell V-Power Mustang. I put big pressure on myself this morning so a big thanks to everyone in the team, to Rich [Harris], my engineer, for methodically working through things last night and giving me an absolute weapon.

“I was really, really thrilled with both my laps. DJ [Dick Johnson] texted me last night and said just stick it to them. We’ve got two long races to go.

With the track dirty, used tyres were seeming the pick for many at the start of Qualifying for Race 13, including De Pasquale (#11 Mustang).

The previous day’s pole-sitter nevertheless kicked off proceedings with a 1:05.9389s, which was usurped by DJR team-mate Davison’s 1:05.6715s once the latter completed his first run proper.

The start of the second and final runs resembled a Moto3 qualifying session, with van Gisbergen (#97 ZB Commodore) notably slow off Turn 5 on his out lap as he tried to set himself up for a tow.

James Courtney (#44 Boost Mobile Mustang) pressed on and was briefly second, but only until Scott Pye (#20 DeWalt ZB Commodore) came through a few seconds later to set a 1:05.7099s.

However, Pye had given van Gisbergen his tow and the championship leader went to the top with a 1:05.3460s.

That stood as pole until Davison blazed to a 1:05.0575s after the chequered flag, shifting #97 to the outside of the front row in the process.

Only around half the field went for the early run in Qualifying for Race 14, with Brown fastest of them on a 1:05.3717s.

For many, however, their fate was decided by one hot lap at the end of the session.

De Pasquale, who held the practice/qualifying lap record for less than 24 hours, secured an inside second row berth with a 1:05.0875s.

That time shuffled Whincup to fourth, Courtney to fifth, and Pye to sixth.

Brown’s early effort was good for 11th, one position ahead of Waters.

All told, the practice/qualifying lap record for a Supercar around Hidden Valley in this, the first weekend with the super soft tyre, has been cut by more than half a second in two days.