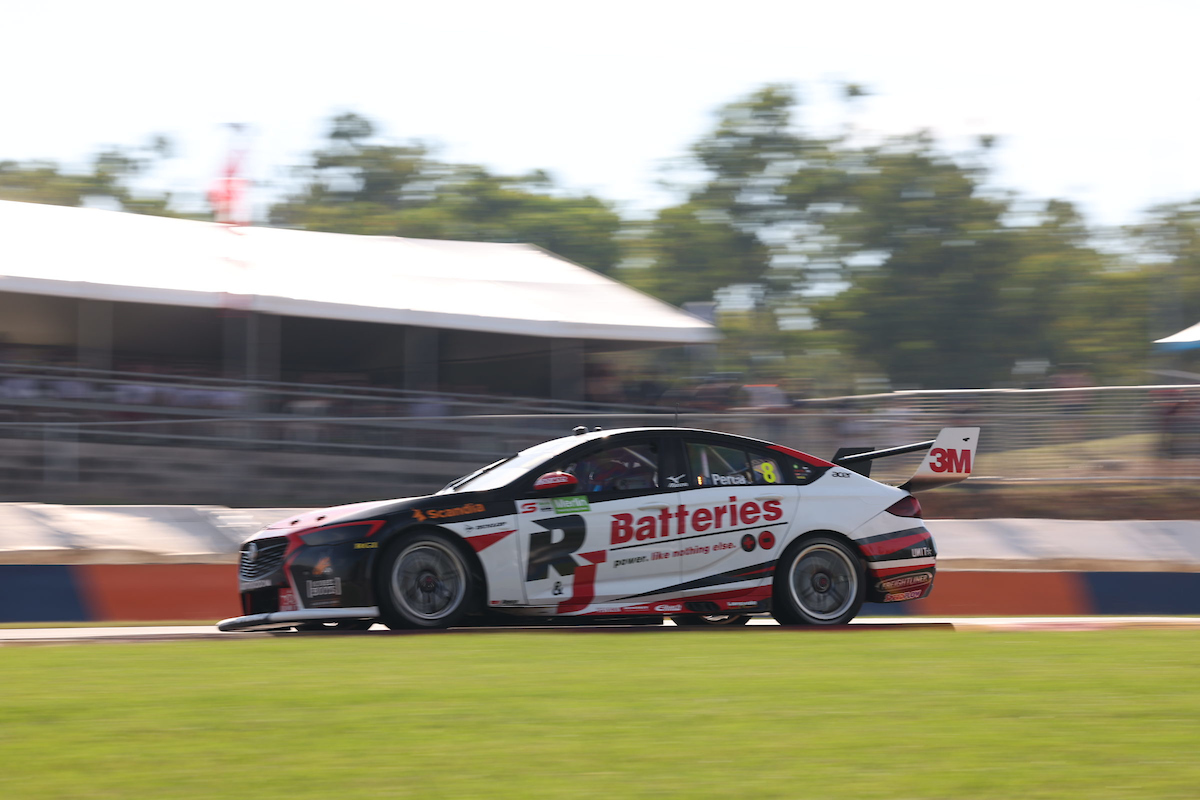 The outcome of the hearing into the Nick Percat car’s alleged tyre pressure breach, and thus results of Race 12 of the Repco Supercars Championship, will be made known tomorrow.

The #8 Brad Jones Racing entry, which took the chequered flag in third, is under investigation after allegedly going under the minimum 17 psi which is stipulated for most events, including this weekend’s Merlin Darwin Triple Crown at Hidden Valley Raceway.

With the stewards hearing having run for around two hours, and given the time required to consider the findings, those findings will not be released until tomorrow, a Motorsport Australia spokesperson has advised.

Percat’s R&J Batteries ZB Commodore was advised by race control to have been under investigation during this afternoon’s 38-lap contest, with the matter ultimately sent to a post-race investigation.

Based on comments from Percat himself and Supercars’ head of motorsport, Adrian Burgess, the alleged breach likely occurred before the race had got underway, with the former claiming it was due to a puncture.

However, even if that is the case, it could still constitute a breach, depending on how the category’s Operations Manual is interpreted.

Rule D17.1.17 states, “The minimum permitted pressure of a Control Tyre when fitted to a Car is 17psi which must be achieved at any time that the Car is on the Circuit during any Session.”

A ‘Session’ is defined in Rule A2.1 as “a period of time allocated to a particular on-track activity in the Event schedule.”

Included with that definition is the following: “Examples of a Session include, but are not limited to, practice, qualifying, warm up and race.”

The event schedule stipulates the pit exit open time, pit exit closure time, and the official race start time, with the breach having seemingly occurred at some point between the former of those items and the latter.

According to Percat, his tyres never dropped under 17 psi during the race itself, and the issue was in fact a puncture that Supercars staff spotted on the grid.

“The tyres I raced on did not dip under 17 [psi],” he stated in the post-race press conference.

“I think they thought we had a puncture on the grid, so they had to change one [tyre] because it was going down really fast.

“So that’s what happened. I think we had to change it late, because they were like, ‘We’ve got a puncture’; on the right-front, I think it was.

“Supercars came past with the sniffer and were like, ‘Ah, think you have an issue.’

“I don’t know how that works with the rules. It’s not like I got to drive around out there with 17 psi and these guys were on 19. I think I was mid-20s.

“We gained zero advantage. It’s actually good that Supercars can see when problems like that are happening, so I didn’t go barrelling into Turn 1 with no pressure in the tyre.”

Burgess explained post-race, “While we’re on the grid, we’re looking at everyone’s tyre pressures as they leave the pit lane; we’re watching everybody’s as a rule.

“As soon as you’re on the track or even in the pit lane, you have got to be 17 psi. We saw it was very low, we saw it was borderline.

“I feel for the engineers, they’re pushing, trying to get every ounce of performance out of this thing, but then when it started showing 16.8, 16.6, there’s a rulebook, we have got to uphold it, so we did what we had to do.

“We captured the data, put it in an email, sent it up to the stewards and hand it over to those guys really.”

While the podium of Chaz Mostert (Walkinshaw Andretti United) followed by Cameron Waters (Tickford Racing) and Percat remains unchanged for now, fourth position has changed twice already relative to how the cars took the chequered flag.

Brodie Kostecki (Erebus Motorsport) had crossed the line fourth but already had a five-second penalty hanging over his head for driving through the infield after late contact with James Courtney (Tickford) put him in the weeds at Turn 5.

That put Courtney fourth until he was hit with the same penalty, post-race, for a restart breach, meaning Kostecki’s team-mate Will Brown inherited that position.

However, Brown could yet be a podium finisher, depending on how the Car #8 matter plays out.