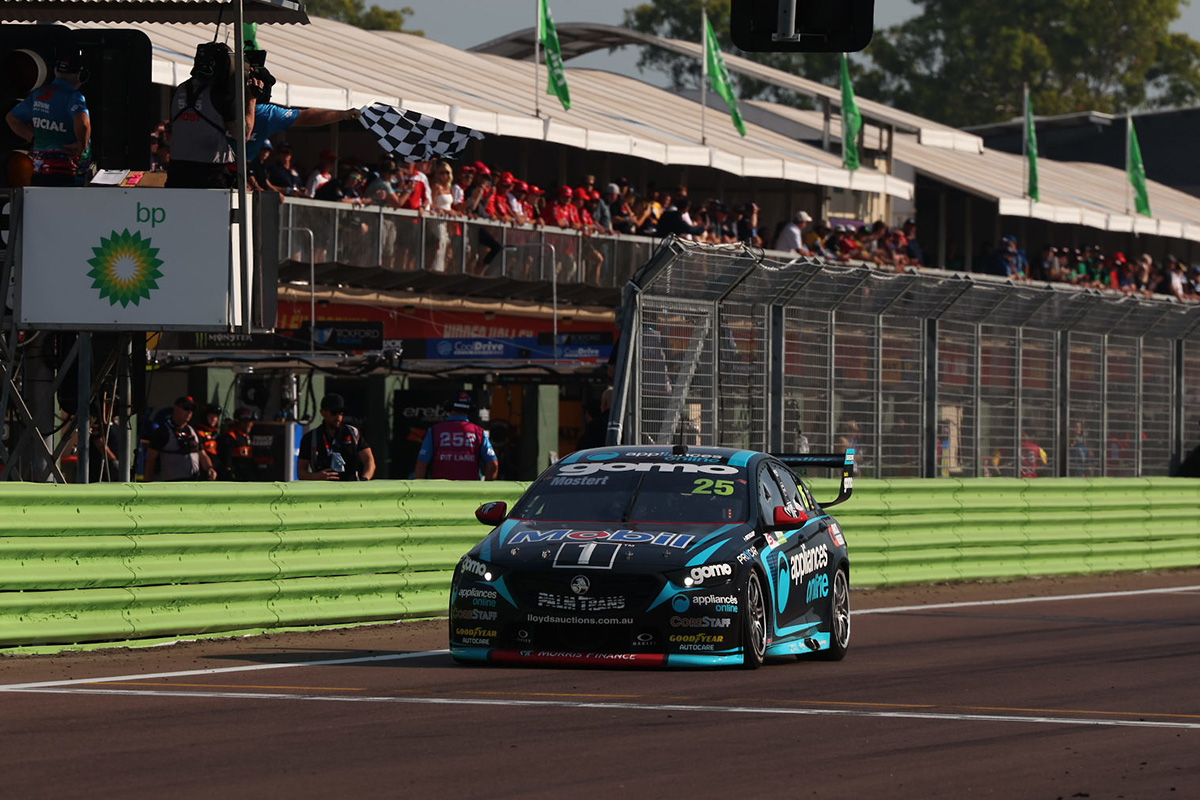 De Pasquale was taken out in a first-corner melee while van Gisbergen lost the lead in an excruciatingly long pit stop and ultimately finished 13th in the opening encounter at the Merlin Darwin Triple Crown.

Having been the main beneficiary of that latter’s misfortune, Mostert then effectively cruised to what would be a 12.3901s victory over Cameron Waters after 38 laps.

Nick Percat took the chequered flag in third but the #8 Brad Jones Racing entry is the subject of a post-race investigation over an alleged breach of regulations regarding minimum tyre pressures.

Brodie Kostecki has already been relegated from where he took the chequered flag, in fourth, having driven through the infield after late contact with James Courtney sent him spinning at Turn 5.

The chaos began, however, even before the field started braking for the first corner.

De Pasquale led the field down there but van Gisbergen made a big dive at the #11 Shell V-Power Mustang on the very inside of the race track and pinched first position.

Mark Winterbottom (#18 Irwin Tools ZB Commodore), who had also started on the front row but whose car propped on the run to Turn 1 with an apparent technical problem, was first to run into Car #11.

Jamie Whincup (#88 Red Bull Ampol ZB Commodore) ended up on the grass, although how much of that was due to evasive action of his own and how much was due to a nudge from Winterbottom as the pack stacked up was not clear.

Whincup was 19th, Jacobson 20th, Pye a lap down in 21st after getting a new front bar, Winterbottom in the pits for repairs, and the rest involved in the incident sidelined for the duration.

The race restarted on Lap 7 and van Gisbergen needed less than four laps to stretch his lead over Percat to more than a second.

Winterbottom had rejoined by the time the front-runners completed Lap 10, albeit several laps down, before Mostert went down the inside of Percat on Lap 11 at Turn 1.

While Mostert was able to gap Percat once past, van Gisbergen continued to pull away, his margin more than two seconds after a dozen laps.

Percat was into the lane on Lap 14 for what appeared to be working side tyres, before Mostert pitted for fresh rears on Lap 20, at which time van Gisbergen was already three seconds up.

The threat of the undercut saw Triple Eight Race Engineering call the race-leading #97 entry into the pits on Lap 22, only for the left-rear tyre changer to struggle to get the gun onto the wheel.

They were eventually able to execute the stop, but not before van Gisbergen had sat there for almost 30 seconds, and he resumed in 20th position, last of those on the lead lap.

Waters, and Andre Heimgartner (#7 Ned Mustang), completed the cycle when they pitted at the end of Lap 26.

Whincup was 12th, having stopped as soon as the CPS window belatedly opened, and van Gisbergen still 20th.

Percat blocked Waters at Turn 1 on Lap 31 but could not resist when the Tickford driver went down his inside four corners later.

That settled the podium, although only provisionally, with Percat already under investigation for the alleged tyre pressure breach before officials decided to deal with it after the fact.

For Mostert, the win is his second of the season and the first since his Walkinshaw Andretti United contract renewal was announced in recent days.

Courtney had passed Brown on Lap 30 before he began to pressure Brodie Kostecki, and that reached a flashpoint on Lap 35 when they hit at Turn 5.

The Erebus Motorsport car went spinning into the weeds before Kostecki opted to drive through the infield and rejoin in the fourth position he had held before the clash, only for a five-second penalty to be handed down prior to the end of the race.

Whincup got back to 12th while van Gisbergen at least has the five bonus points for the fastest lap to go with his lowly finish of 13th.

Pye was two laps down in 21st, after incurring a drive-through penalty for the first-corner incident which had little practical effect.