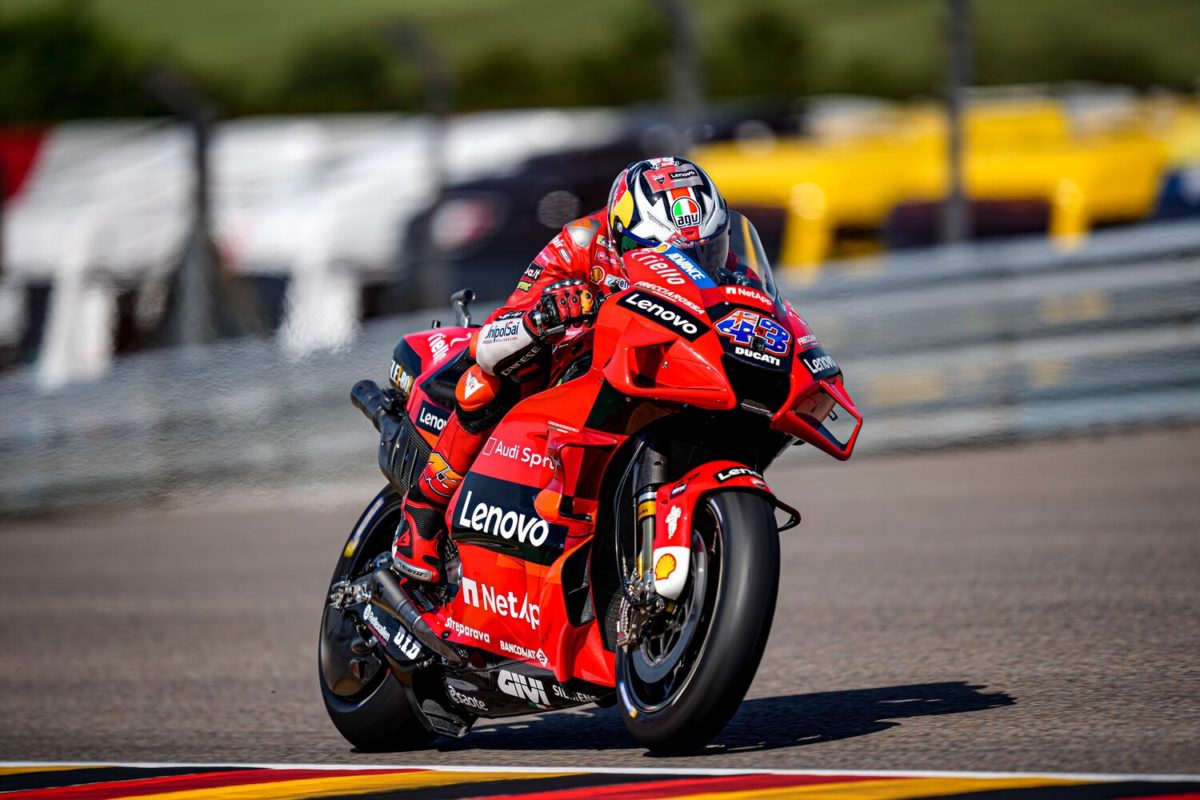 Jack Miller admits that he was “panicking a little bit” in the Sachsenring’s third sector in practice for the German MotoGP.

Miller is ninth-fastest after the first two sessions in Round 8 of the season, meaning he is provisionally on for direct passage to Qualifying 2.

However, the Ducati Lenovo Team rider is still psyching himself into Sector 3, which includes the fast, plunging Waterfall corner.

“You know, red [fastest of all riders] in Sector 1 and 2, but in Sector 3, I’m just struggling at the top of the hill, I think more to do with my riding than anything.

“The bike seems to be working really well – through [Turn] 8 it’s great – but then when I get to the top of the hill, I’m sort of panicking a little bit and using far too much rear brake instead of letting the bike roll.

“As I’m doing that, I’m sort of taking load off the front tyre and the bike’s getting a little light in the front.

“So it’s something I can work on; I already tried it towards the end of my last run.”

Even so, the Queenslander is broadly satisfied with his output on Friday at the Sachsenring. 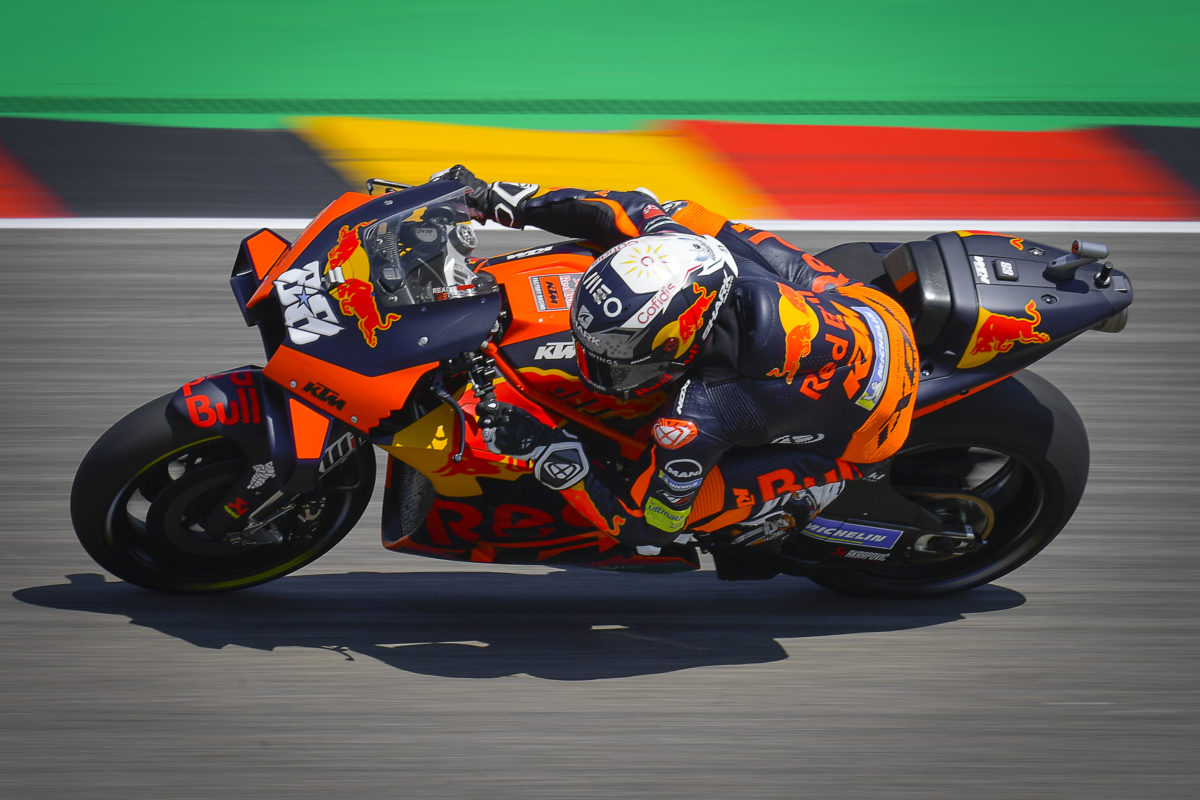 Red Bull KTM Factory Racing’s Miguel Oliveira set the pace on a 1:20.690s, and the top eight on the timesheet each clocked their personal best lap time with a soft rear tyre.

Miller, on the other hand, went as quick as a 1:21.192s with Michelin’s medium compound rubber on the front and rear of his Desmosedici.

He believes medium will be optimal for Sunday’s 30-lap race, although that would still require some finessing of his set-up.

“[All] in all, a good day,” said the man with two race wins so far this year.

“I didn’t put the soft in, just did the lap time at the end with the medium, felt relatively comfortable with that, and saved at least one more soft for tomorrow.

“I think the track will be a little bit faster in the morning, so that was my main thought on that.

“I managed to try the hard front and the hard rear today. [The] Hard rear is definitely more of a back-up sort of solution; it’s a solid tyre, it works well, it’s very consistent, but for sure you miss that outright performance like you get off the new casing on the medium and the soft.

“So, I think we need to try and work on the bike to set it up to make the medium last the race distance. 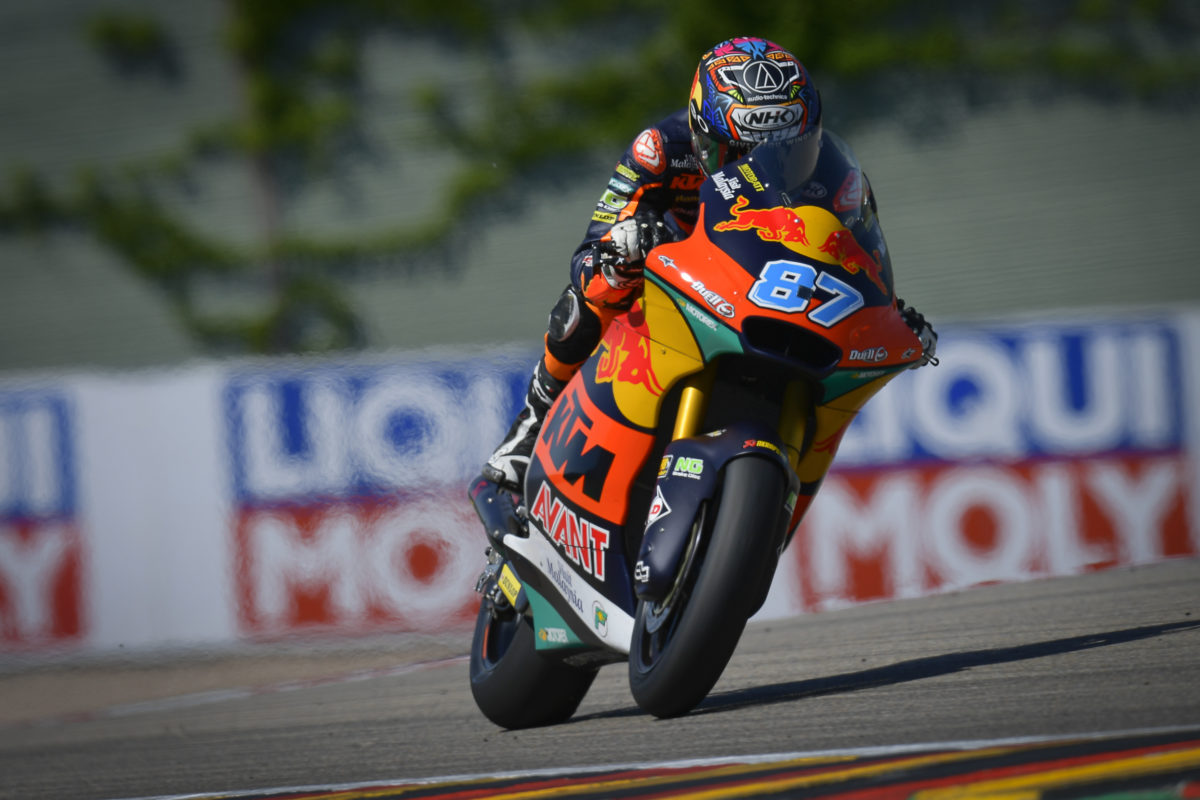 The Sydney native’s 1:24.197s in Free Practice 2 was the fastest time of the day and left him more than three tenths up on team-mate Raul Fernandez.

“It was a very positive day for us, since we have always been at the top of the standings,” said Gardner.

“I’m happy with the pace we have, because we were able to set more than one fast lap.

“However, we have to keep working as we still have a long weekend ahead of us.”