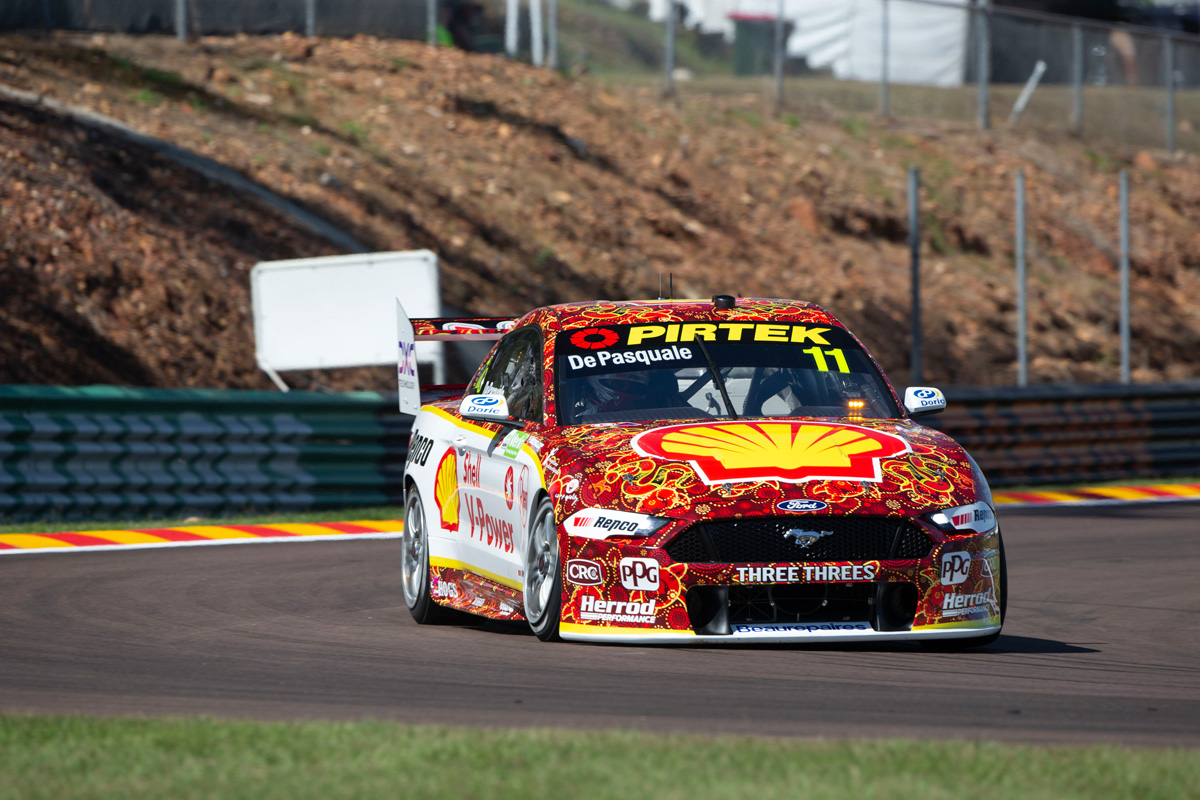 In a knockout session decided by a Top 10 Shootout, De Pasquale was only a provisional sixth after the first two parts of qualifying and made an error at the Turn 6 hairpin during the one-lap dash.

However, he was quickest in the first sector and particularly rapid in the third, driving the #11 Shell V-Power Mustang to a 1:05.2904s which beat Dick Johnson Racing predecessor Scott McLaughlin’s two-year-old benchmark by almost two tenths of a second.

Also on the front row after the first ever qualifying session on the new super soft tyre will be Team 18’s Mark Winterbottom, who looked on to beat De Pasquale given his cleaner run through ‘the valley’.

However, he kicked up the dirt exiting Turn 11 and ultimately achieved a 1:05.4054s in the #18 Irwin Tools ZB Commodore to take second spot, a gain of two positions and also under the old McLaughlin record.

Championship leader Shane van Gisbergen was last out for the shootout and put the #97 Red Bull Ampol ZB Commodore third on the grid with a 1:05.5041s.

Van Gisbergen had followed Scott Pye, who made it two Team 18 entries on the first two rows with a 1:05.5943s in the #20 DeWalt ZB Commodore.

All of that meant that De Pasquale takes a third pole of his Supercars Championship career, which happens to also be his third in a row.

“I said to the boys when I came in, I think the lap was pretty good other than one mistake which was looking like enough to lose it,” said the DJR pilot.

“Obviously, the thing was a rocketship and I sort of just held on for the rest of the lap. Good to get three in a row and we’ll try to convert this afternoon.”

Nick Percat (#8 R&J Batteries ZB Commodore) was a provisional eighth on his way into the one-lap dash but moved up three positions thanks to a 1:05.6304s.

Jamie Whincup was next onto the track and while he went almost two tenths faster than Percat to the first sector, he ran wide at Turn 6 then lost more time in Sector 3.

The seven-time champion stopped the clocks at a 1:05.7089s which puts the #88 Red Bull Ampol ZB Commodore sixth on the grid.

Sharing Row 4 will be Cameron Waters in seventh and Chaz Mostert in eighth, both of whom only had used tyres after going for two runs in Part 2 of qualifying.

While De Pasquale’s lap time was impressive, it was a continuation of the escalating pace in Part 2 of qualifying, when Pye went to a 1:05.5296s in the bunch of nine which went out initially.

The top four of those lapped faster than Whincup had done in topping Practice 2 on the afternoon prior, before van Gisbergen took over the ascendancy with a 1:05.5079s in the latter half of the 10-minute stanza.

He would remain fastest while Jake Kostecki (#34 Unit ZB Commodore), who was quickest through Part 1 having used two sets of tyres, ended up 11th.

While Jake Kostecki being fastest in Part 1 of the session on a 1:06.0693s might have been something of a surprise, the list of names in the sextet which missed the cut was full of shocks.

James Courtney (#44 Boost Mobile Mustang) was bumped out by Fullwood right at the end and the 2010 champion will start 21st, alongside Will Brown (#9 Ozland Group Solutions ZB Commodore).