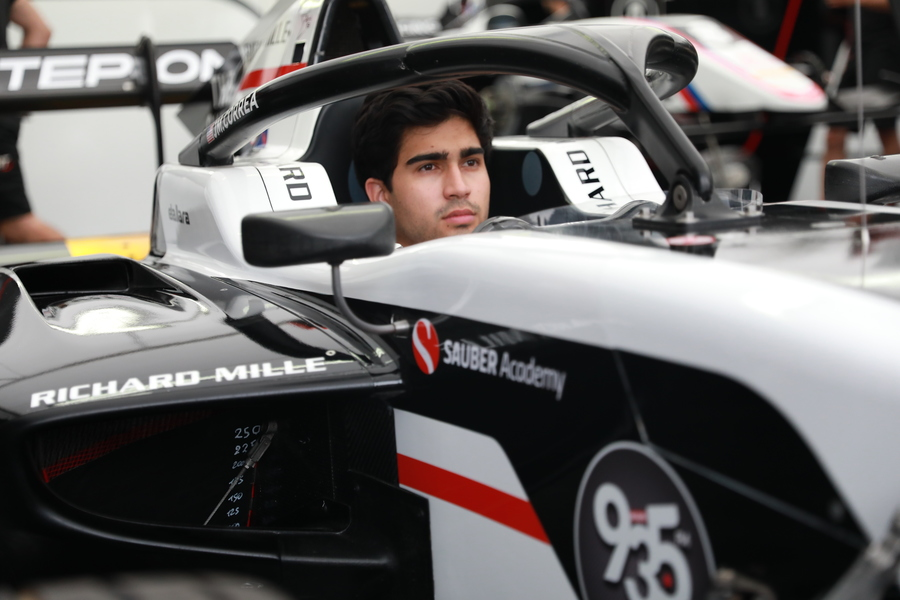 Juan Manuel Correa’s career has received a boost after joining the Sauber Academy, the in-house junior programme for the team currently operating under the Alfa Romeo banner in Formula 1.

Correa was involved in an accident at Spa-Francorchamps in 2019 which claimed the life of Anthoine Hubert and left the Ecuadorian in an induced coma.

The 21-year-old also sustained significant leg injuries in the impact and for a time faced the prospect of amputation of his right leg.

He made his racing return this season and is competing with ART Grand Prix in the FIA Formula 3 Championship.

Correa had his first taste of Formula 1 machinery at Paul Ricard in 2019 after racing for the Sauber Junior Team in that year’s Formula 2 Championship, a relationship that has now been rekindled.

“It’s very special to be back with the Sauber Academy: they’re the junior programme of the team I was with in 2019, when I had my first and only F1 test, and it’s a great feeling to be working with them again,” said Correa.

“I am very excited to show the Academy’s branding on my car and my helmet already from this weekend in France and I am looking forward to helping the team whenever needed, be it in the sim or elsewhere.

“I am very grateful to ART and Sébastien Philippe, and of course to Fred Vasseur, for all the support he has given me, and to everyone else at Sauber, from Beat Zehnder to all those who have been absolutely amazing and so supportive since my accident and throughout my recovery.

“It’s an honour to be back with this team.”

“It was a very tough time for everybody, and Juan Manuel had something like 22 surgeries.

“He spent the last two years with a clear target to come back., it was for him the main motivation, and I wanted to help him.

“The way I have to do to help him was to ask him to come back to the Academy and to try to support him on the on the project.”

Alfa Romeo has Kimi Raikkonen and Antonio Giovinazzi on its books in F1, with Robert Kubica as reserve driver.

Correa is in action this weekend for Round 2 of the FIA Formula 3 Championship.