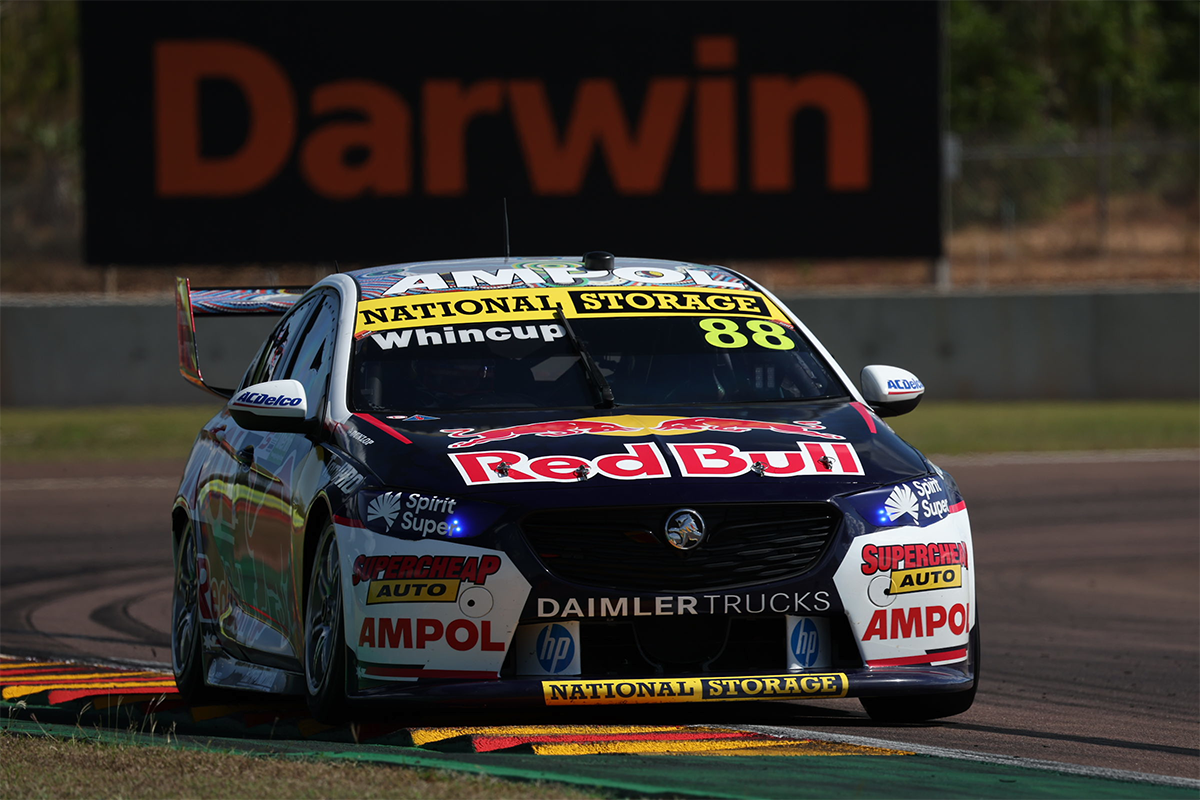 Jamie Whincup has gone fastest with the only ‘five’ of the day in Practice 2 for the Repco Supercars Championship field at the Merlin Darwin Triple Crown.

The Shell V-Power Racing Team’s Anton De Pasquale ended up third in what was a half-hour hit-out at Hidden Valley Raceway, just 0.0262s further back from Pye.

There was early drama when the bonnet flew up on Bryce Fullwood’s #2 Mobil 1 Appliances Online ZB Commodore, prompting the Darwin native to park on the inside of the main straight.

That resulted in a brief red flag period, at which point there had been no time for anyone to complete a lap, before the field was let loose again.

De Pasquale had a lively start to the session, with an off at Turn 5 before he went to the top on a 1:06.4459s despite dropping a wheel into the weeds and cranking the #11 Mustang sideways exiting Turn 1 on the lap in question.

Mark Winterbottom (#18 Irwin Tools ZB Commodore) was next to spend time at the head of the timing screen when he clocked a 1:06.4268s, then Whincup (#88 ZB Commodore) set a 1:06.2144s even though he kicked up the dirt exiting the final corner.

“There’s a big challenge for engineers,” said Whincup of the super soft tyre.

“You have got to have qualifying pace because qualifying is obviously really important but then you need to make sure you get a bit of a gauge of how long the tyre is going to last.

“We can take a guess, we’ll use that information from the race run to fire into the Excel spreadsheet and see how long we think we can go in the race before we have got to change.”

Shane van Gisbergen had been shuffled towards the bottom of the timing screen until he laid down a 1:06.1456s in the 27th minute which would see the #97 Red Bull Ampol ZB Commodore end up seventh.

Winterbottom finished up eight on a 1:06.1658s, making him the last driver to go under Percat’s Practice 1 pace-setter, with the top 10 rounded out by James Courtney (#44 Boost Mobile Mustang) and Brodie Kostecki (#99 Boost Mobile ZB Commodore).

Qualifying for Race 12 of the 2021 Supercars Championship, a knockout session culminating in a Top 10 Shootout, gets underway from 11:35 local time/12:05 AEST.