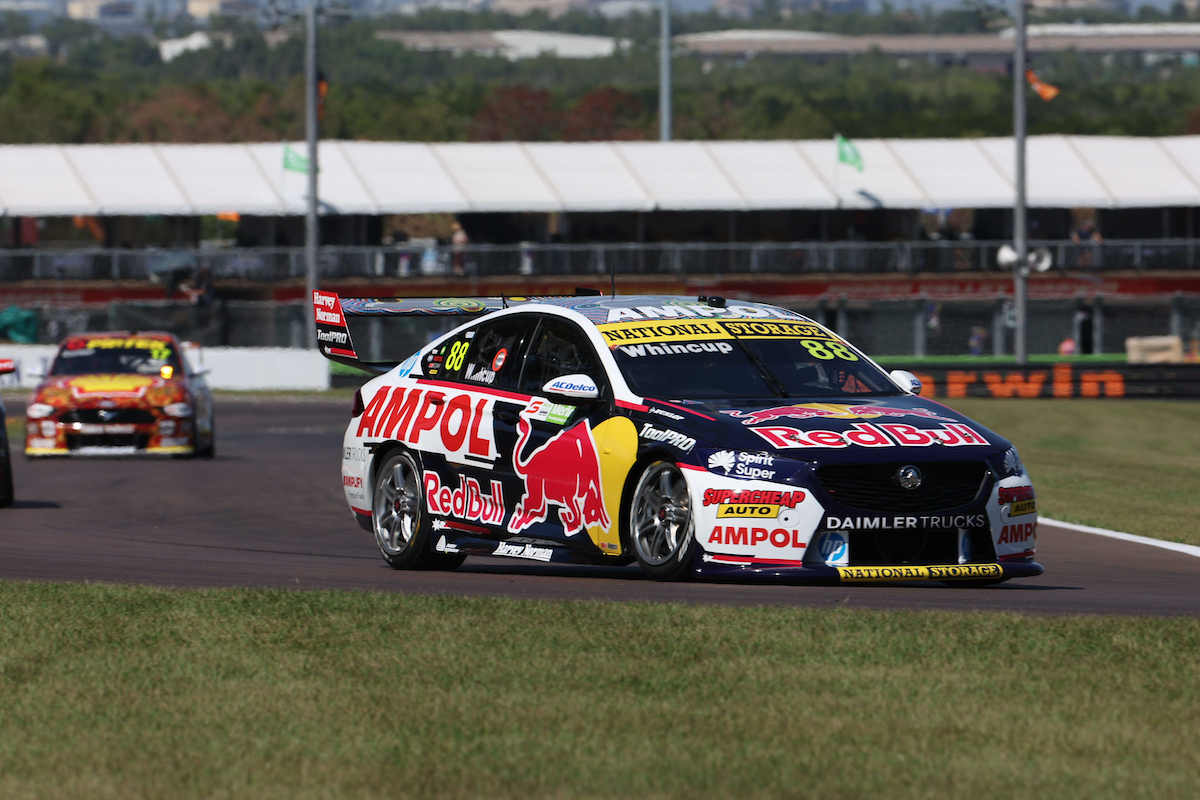 The Merlin Darwin Triple Crown marks the competition debut of the new compound, which the Triple Eight pilot and Dick Johnson Racing counterpart Will Davison drove on for development purposes at Queensland Raceway late last year.

Despite the ‘super soft’ name suggesting that tyres might ‘fall off a cliff’ midway through a stint, Whincup cautioned against assuming that there will be a lot of degradation.

“The perfect tyre around here would have to be a fair bit different to what we’ve got but we need a tyre that we can use in all different circuits that requires the right amount of degradation to try to spice the racing up.

“There was never going to be a huge amount [of degradation] here, at Darwin, but certainly other tracks, there’ll be a lot. But whatever the soft tyre was going to be, there’ll be more deg than that, so we’re heading in the right direction.”

While those comments might seem surprising given the ambient temperature during today’s two Repco Supercars Championship sessions was above 30 degrees Celsius on each occasion, track surface is key.

Hidden Valley is a relatively smooth circuit, unlike Queensland Raceway.

“Although the temperature’s up, the surface is much smoother here than certainly Queensland Raceway.

“So, you feel the grip, the outright pace differential between super soft and soft is the same, but the tyre just won’t degrade as much here as what it did at QR.”

For Davison’s team-mate Anton De Pasquale, who was third-fastest in practice, the new-spec rubber did not feel all that unusual.

“You never really feel those things too much unless you’re changing tyre-to-tyre on the same day,” he stated.

“You just roll out and you’ve got the grip and you drive. Everyone adapted, I think, very quickly.”

Nevertheless, there is still a strategic puzzle given, as is standard for a sprint event, each car has five sets of tyres to get through qualifying and six stints of racing.

Teams must decide whether they prefer track position or to change more tyres when their drivers pit, and if they opt for the latter, how to ration their tyres across the three races.

As Whincup notes, the super soft will degrade more than the soft would, even if not as much as some may hope or expect, which should add to the intrigue this weekend.

“Whatever [degradation] was going to be on soft, it’s going to be exaggerated now on super soft,” he observed.

“You’ve got eight tyres to change over three races – that’s if you don’t recycle tyres to start with – so it’s good, there’s plenty going on.”

Asked whether that will lead to a scenario similar to last year’s mixed compound events, when the order could fluctuate wildly depending on tyre choice, the seven-time champion said, “Well, we don’t know.

“That’s the great thing about a new tyre and a new change – there’s an unknown there – and it’s all part of sport, which is a good thing.”