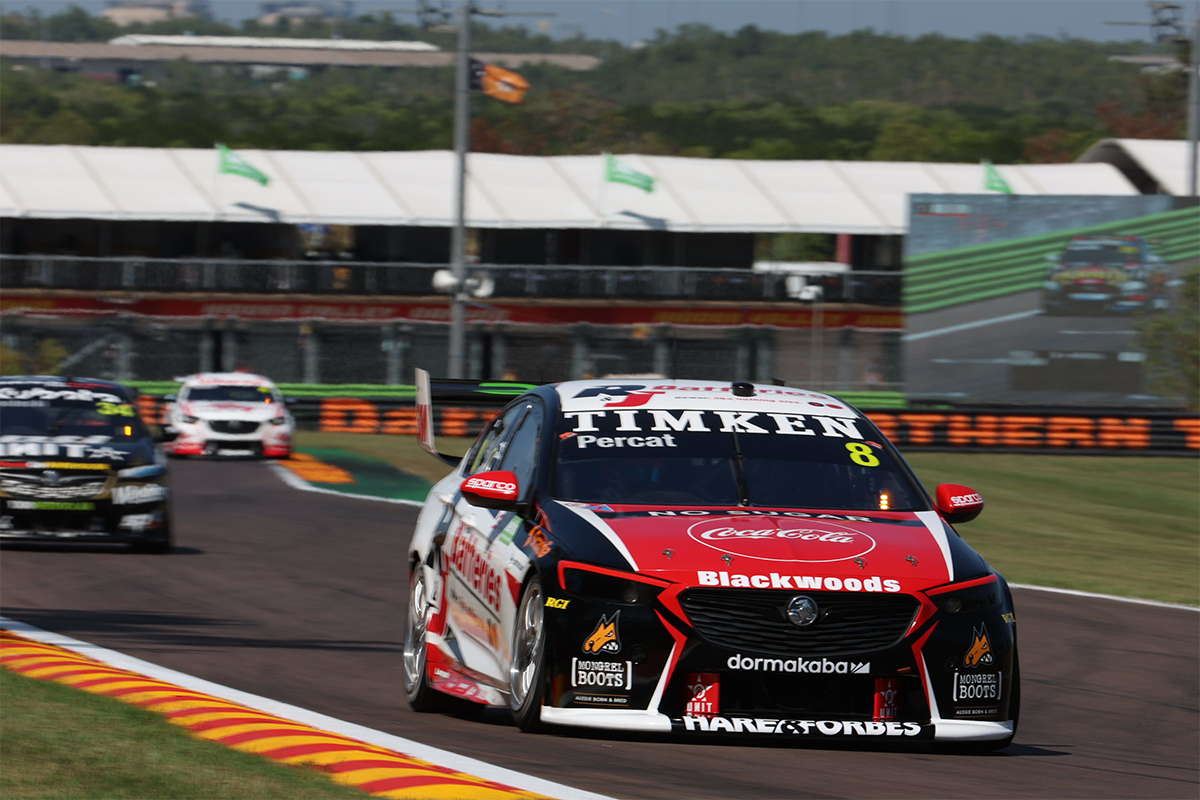 In the first official hit-out for the super soft tyre, Percat’s 1:06.1695s with the chequered flag flying would be the very fastest lap of the 40-minute session at Hidden Valley Raceway.

“It did feel good,” said Percat, the only driver to beat the fastest practice lap time from last year’s two Darwin events (1:06.2401s), which was set on a soft tyre.

“We had a very well-structured programme and we just stuck to it and went through the changes like we wanted and the end result was a pretty fast lap time.

“Obviously being Practice 1, I think Chaz [Mostert] was very fast on the used tyre but we made a change at our last run before new tyres and it actually really hooked up and was pretty quick then.

“There’s a little bit more to come but early days in Practice 1. It was nice to have a drive on the super soft and back at Darwin, I love being up here and it’s good to give some branding and awareness to R&J Batteries as well while we’re out there.”

The latter had been fastest for the vast majority of the session, kicking things off with a 1:06.3349s on his first hot lap, which would remain his fastest.

Chaz Mostert (#25 Mobil 1 Appliances Online ZB Commodore) initially roaded a set of tyres before moving to second, 0.0253s off Winterbottom’s pace, by the time he had completed his first run proper.

Those two remained the top two until the ‘happy hour’ right at the end of proceedings, when De Pasquale went 1:06.2904s in the final minute before the chequered flag.

While Pye’s 1:06.3291s at the end left him fifth, it was his first of only two runs that was a source of interest given the new specification of rubber for the weekend.

He spent 23 laps on his initial set of tyres, including in and outs, clocking mid-sevens deep into the run before setting a 1:07.8524s just prior to pitting.

Mostert was shuffled back to sixth in the end with the time he set on his opening run, while David Reynolds (#26 Penrite Mustang) ended up seventh at 0.2683s off the pace.

Championship leader Shane van Gisbergen ended up 11th on a personal best 1:06.6349s from his first run proper, which would be 0.4654s off the ultimate pace.

Red Bull Ampol Racing put a new front bar on his #97 ZB Commodore midway through the session due to a splitter vibration, while van Gisbergen subsequently had multiple offs.

Will Davison was 13th in the #17 Shell V-Power Mustang and Jamie Whincup 14th in the #88 Red Bull Ampol ZB Commodore, while it was the top 22 cars covered by just under a second.