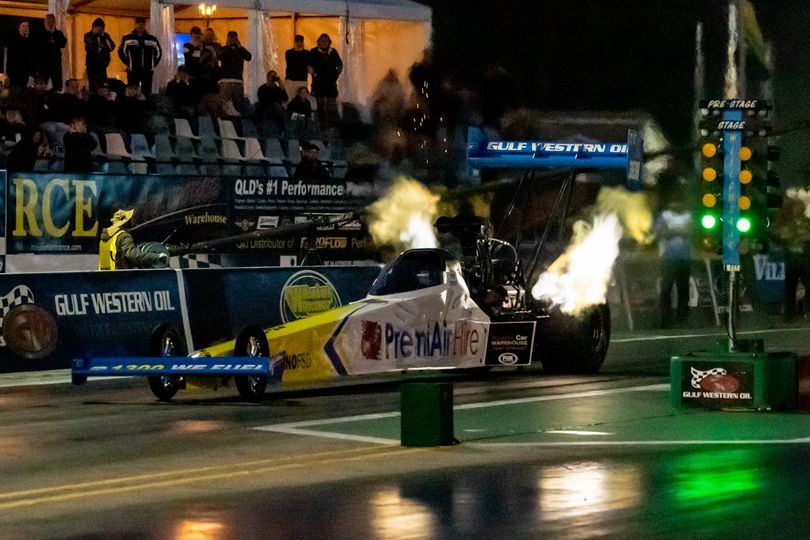 Peter Xiberras and the PremiAir Racing team have won the Gulf Western Oils Winternationals and the 400 Thunder Top Fuel championship in record-breaking fashion.

Xiberras beat Phil Lamattina in the final at Willowbank Raceway, having completed the fastest 1000-foot pass in Australian history earlier in the day.

Nevertheless, when his dragster lost a blower belt at half-track in the penultimate race of the season, it set up a winner-takes-all final.

Xiberras prevailed, claiming the 2019/21 top fuel title in 400 Thunder in the process.

“After Saturday night’s effort where we ran the quickest pass in Australia but I red-lit, I really thought I had thrown the whole thing away to be honest and I didn’t get a lot of sleep that night,” he admitted.

“But here we are, we ended up in the final and to actually pull this off is what dreams are made of. I just can’t believe it.

“My crew, Timmy, Benny and the boys, they are the unsung heroes; the drivers seem to get all the credit, but it has to go to them.

“We were here ‘til midnight on Saturday night just making sure everything was perfect and then we were back on Sunday morning at 6.30am to resume preparations – their commitment and their drive is just unbelievable.”

PremiAir Hire Racing team manager, Tim Adams, added, “We are so proud of our entire team, everyone dug so deep this weekend and there was absolutely nothing left on the table.

“It was getting so cold while we waited to commence the final and we were a little worried we might run into some shake as a result, but in the end, it was just perfect and here we are as the national champions, the event winner, the new national record holder, and the new track record holder – it doesn’t get much better than that.”

Among the other winners at Willowbank were Gary Phillips in Pro Alcohol, Steven Ham in Pro Slammer, and Scott Porter in Pro Stock.

The former two ended up being champions in their respective divisions, while Tyronne Tremayne took out the Pro Stock title for the 2019/21 season.