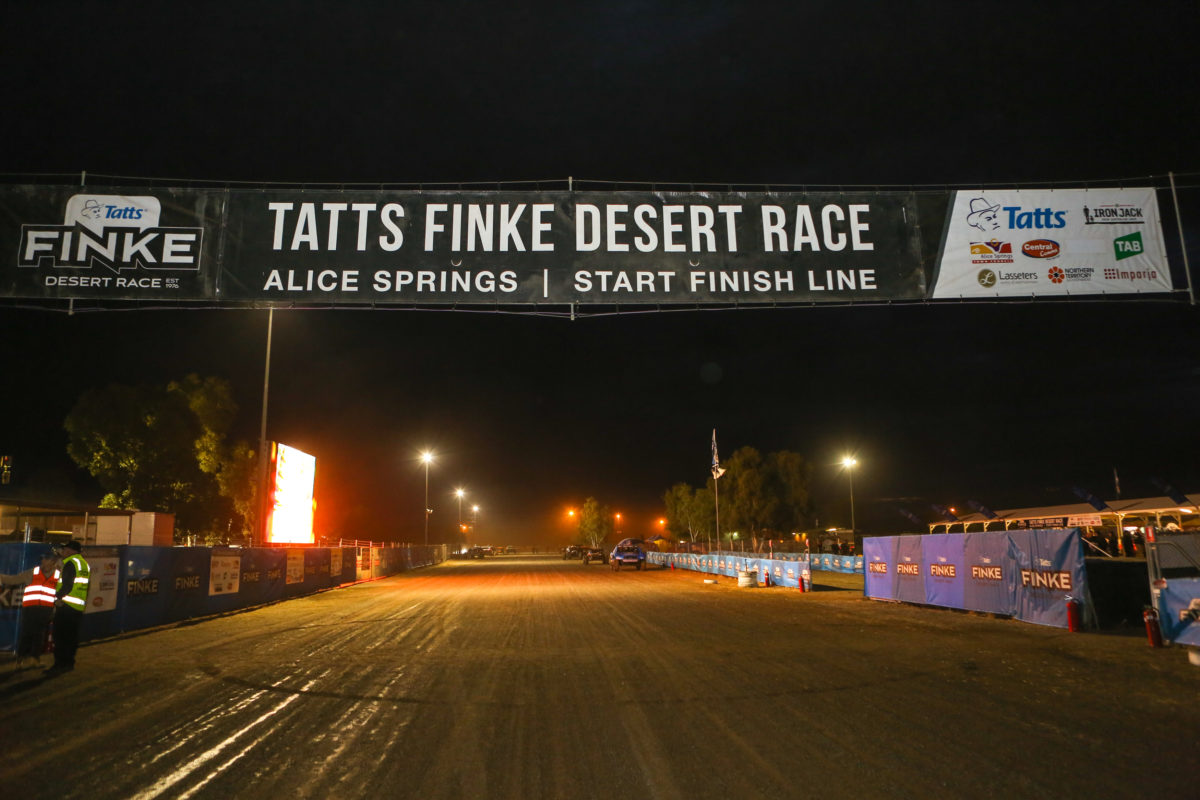 The start/finish line in Alice Springs

Northern Territory Police have confirmed that a man has died after being struck by a vehicle at the Tatts Finke Desert Race.

The incident occurred this morning during the return leg for the cars category, around 35km from the finish line.

Witnesses reported that a vehicle which was being raced in the event striking a group of spectators.

A man in his 50s was seriously injured and airlifted to hospital in Alice Springs, while the navigator, a female aged in her 50s, sustained minor injuries.

Another man in his 60s died at the scene.

Police are calling for witnesses to come forward.

See below for full statement from Northern Territory Police

The event itself has now released a brief statement, which reads as follows:

“The Finke Desert Race mourns the tragic loss of a spectator in an unfortunate tragedy.

“Due to the nature of the incident, the event is cancelled while the appropriate authorities investigate the incident further.”

Meanwhile, two motorcycle riders are being airlifted to hospital in Adelaide due to a separate incident last night.

See below for earlier story

Northern Territory Police are calling for witnesses to a crash in which one person has died and two others have been injured during the Finke Desert Race earlier today.

At 9:38am police received a report of a group of spectators being struck by a vehicle racing the Finke Desert Race track, 35km from the start/finish line.

A male spectator aged in his 50s was seriously injured as a result of the crash and medevaced to the Alice Springs Hospital, and the navigator of the vehicle, a woman aged in her 50s, received minor injuries.

Another man in his 60s who was a spectator at the event and was struck by the vehicle has died at the scene. No further information is available in relation to the person at this stage.

The area has been cordoned off and competitors have been diverted from the area, which has been declared a crime scene.

Police are investigating the circumstances surrounding the cause of the incident and calling for any spectators who may have witnessed the incident or have dash cam or video footage — to contact police immediately on 131 444.

Police are still investigating an incident at the Finke event which is believed to have resulted in the death of a spectator.

The 2021 Tatts Finke Desert Race was cut short earlier today after a serious incident before the bikes were due to depart for their return to Alice Springs.

A statement from organisers confirms that the investigation is ongoing.

“Motorsport Australia and Event Organisers have advised that as the NT Police are still carrying out investigations at the scene of today’s incident, the Clerk of the Course has declared the Car Section of the Finke Desert Race concluded,” read that update a short time ago.

“Arrangements will be made in conjunction with NT Police for vehicles stopped on the course at various locations on the Finke Track to be recovered by crews.

“Competitors and crews will be advised in due course.”

It is believed that a spectator was killed, although authorities are yet to provide confirmation.

However, NT Health has advised that two other fans injured in the incident have been taken to Alice Springs Hospital where they are in a stable condition, according to the Northern Territory News.

In a separate matter, the NT News also reports that two motorcycle riders are being flown to hospital in Adelaide with spinal injuries.

The pair were injured on Sunday evening after the opening leg of the event and flown to Alice Springs, where they were stabilised.

They are being transferred to the South Australian capital by the Royal Flying Doctor Service today.

Toby Price had already sealed his first four-wheel Finke victory before the incident came to light, while David Walsh is a repeat winner in the bikes having been quickest on the outbound leg to Aputula.