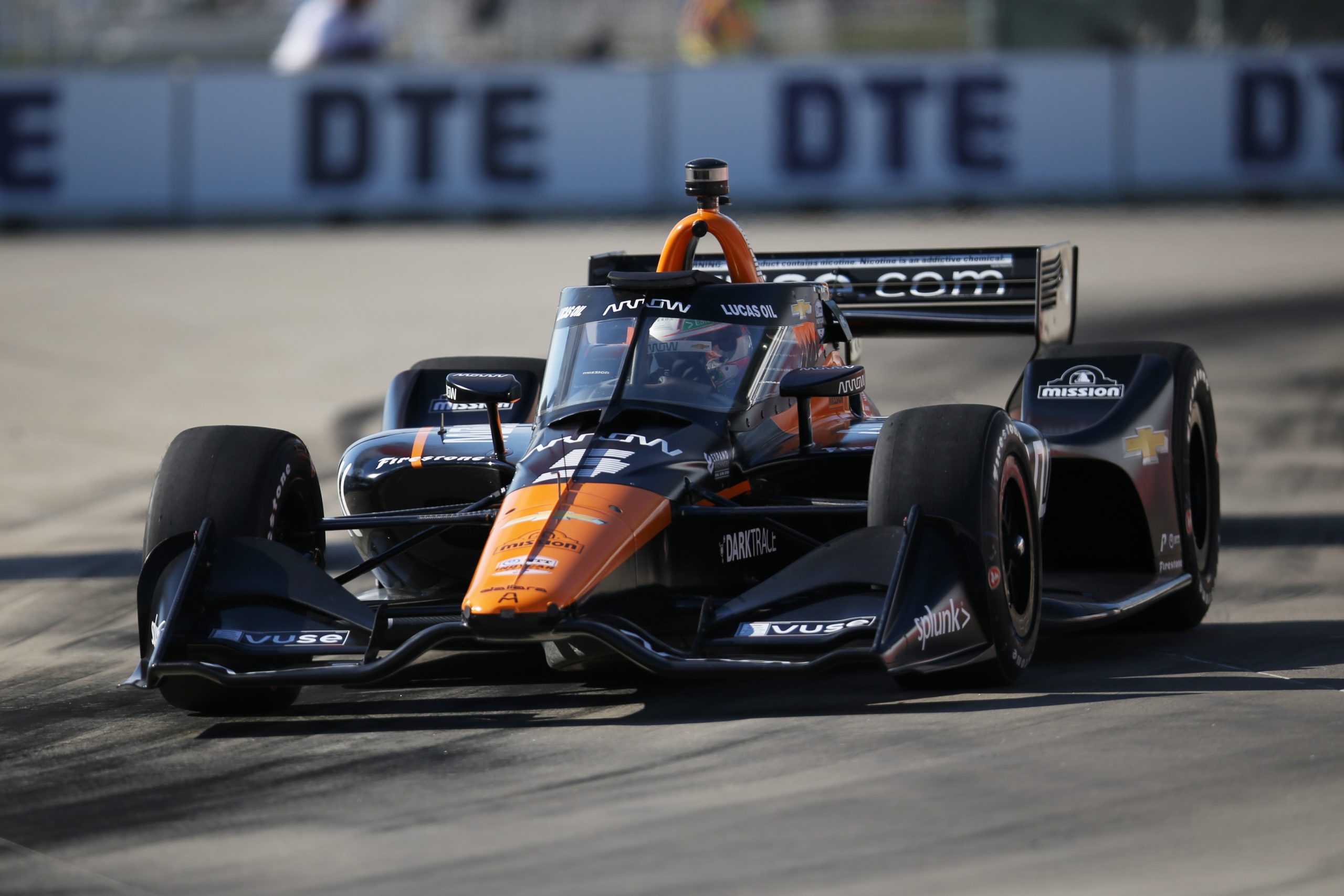 Pato O’Ward came out on top in the second race of the Dual in Detroit despite a dominant run by Josef Newgarden on the Belle Isle Street Circuit.

In what was a thrilling finish to the 70-lap affair, the McLaren SP driver stormed from fifth at the final restart of the race to snag his second IndyCar Series win.

Despite leading 67 of the 70 laps, Newgarden couldn’t hold on when it mattered most and ceded position to O’Ward with just three laps to go after a big slide out of Turn 6.

The win takes the Mexican driver to the top of the IndyCar Series standings by one point over Palou, who had led the standings since winning the season opener at Barber Motorsports Park.

“Man, I’ve had such a great car all weekend,” said O’Ward.

“Today it was my fault that we made it a little extra hard on ourselves starting from the back, but I knew I had a great car under me.”

The win comes just a day after team-mate Felix Rosenqvist suffered a mammoth crash in the opening race of the Detroit Grand Prix.

It also comes just a week after the recent passing of McLaren figurehead Mansour Ojjeh.

“I texted Felix this morning, the important thing is that he’s okay, but I told him, ‘I’m going to win it for ya’,” said O’Ward.

“So, this is for him and for Mansour, may he rest in peace.

“The guys have been doing a great job. They all deserve this. There’s still so much to go. We just need to stay on it and continue pushing.”

As the trio headed into Turn 1, Dixon on the outside turned across the bow of Grosjean in the middle and was sent into a slide.

As Dixon rotated, the front caught Rossi’s car on the inside and straightened him up. In the end, Dixon lost out on only two positions to Rahal and Ed Jones (Dale Coyne Racing with Vasser Sullivan).

As the field barrelled down to Turn 3 there was more drama as Sebastien Bourdais (AJ Foyt Racing) bounced over the inside kerb.

As he struggled to get his car up to speed on corner exit, the concertina resulted in James Hinchcliffe (Andretti Steinbrenner Autosport) checking up and Max Chilton (Carlin) colliding with his right rear wheel, launching the Englishman’s car skyward.

Chilton suffered a broken front wing in the incident, which got caught under his front wheels. As he headed to Turn 4, the car understeered into the outside wall and Chilton ground to a halt.

That duly brought out the first Safety Car intervention of the race.

Rinus VeeKay (Ed Carpenter Racing) was among the frontrunners to pit under yellow, dropping him from third to 18th in the order.

On the fringe of the top 10 in 12th and 13th respectively sat Will Power and Scott McLaughlin who had started the race in 20th and 21st.

Shod with the hard compound tyres, Newgarden stretched his legs to a 2.3s advantage over Herta, who started on the soft compound tyres, after the first full lap of green flag racing.

Rossi began to hemorrhage positions as damage to his front wing from the Lap 1 incident with Grosjean and Dixon worsened.

Having run fourth at the restart, he was soon dispatched by Rahal and began falling to the back end of the top 10.

Contact between VeeKay and Ericsson at Turn 7 resulted in the Dutch driver suffering a puncture, forcing him to the pit lane come Lap 16.

Rossi’s run inside the top 10 came to an end on Lap 17 as he came pitted for a new front wing, resulting in a lengthy stop.

Dixon made his way to the pits on Lap 19 followed by Ferucci and Pagenaud for their first service of the race.

Newgarden pitted on Lap 20 with a 13-second advantage over Herta. Palou, Rahal, and O’Ward followed suit.

Still, Newgarden led, but with Power in second who opted to run long on his first set of tyres. Herta was third with Sato, Palau, Ericsson, Rahal, Harvey, Dixon, and O’Ward the top 10.

Power duly pitted on Lap 26 as did early stopper Sato, dropping the Australian to ninth.

Harvey, who pitted on Lap 28, copped a hit from Grosjean on his out lap, spinning the Englishman at Turn 6. That took him out of contention as he pitted with a flat right rear tyre.

The Frenchman was duly penalised for the incident, sent to the pit lane for a drive-through.

After the first round of pit stops, Newgarden had established a handy 10-second lead over Herta. However, by the time Herta pitted on Lap 45, that margin was down to four seconds.

Newgarden came to the lane a lap later for his final stop, fitting his car with soft compound tyres while the lion’s share of the top 10 were on hard compound tyres.

At the end of the pit stop cycle, Newgarden’s advantage over Herta was down to three seconds while an off-strategy Power was third and eight seconds adrift come Lap 50.

It wasn’t long before Herta sliced Newgarden’s gap and by Lap 52 was within striking distance.

Drama struck on Lap 54 when Jimmie Johnson spun in front of the leaders at Turn 1 and stalled, bringing out the second Safety Car intermission.

With the race neutralised and the field cleansed after the final round of pit stops, it was Newgarden who led Herta, Palou, Rahal, Dixon, O’Ward, Power, Ericsson, Pagenaud, and quiet achiever Ryan Hunter-Reay (Andretti Autosport).

Newgarden brought the field to green with 12 laps to go.

O’Ward was quick to make headway on the restart, dive-bombing Dixon into Turn 1 to steal fifth.

His charge was short-lived though as Grosjean spun and came to a halt, bringing out yet another Safety Car intermission.

Another stellar restart from fifth placed O’Ward saw the young Mexican launch past Rahal on at Turn 1 then sweep around the outside of Palou into Turn 3.

Soon enough he was pressuring Herta for second, and with six laps to go surged by at Turn 7.

O’Ward cut down the one-second lead to Newgarden in half a lap, bridging the gap to just a few car lengths with five laps to go.

With three laps to go, Herta made his way back into the picture for the win, but as he went to the outside of O’Ward into Turn 3, the young American locked up and went wide.

As O’Ward pressured Newgarden, the two-time series winner lit up his tyres, allowing the McLaren SP driver to get alongside and get a pass done down at Turn 7 – the pair rubbing panels on the run down to the braking area.

Moments later, Palou swept around Herta to demote the Andretti Autosport driver off the podium.

From there, O’Ward stretched his legs out to a whopping 6.7s lead over Newgarden who held off an attack from Palou in the closing laps.

Having been a race winning contender, Herta eventually finished fourth while Rahal was fifth.

Power would wind up sixth while Dixon was seventh, Pagenaud eighth, Ericsson ninth, and Ferrucci the last of the top 10 runners.

Scott McLaughlin finished 20th and one lap down having come to the pit lane for an extra stop late in the race.

The series heads to Road America on June 20 (local time).