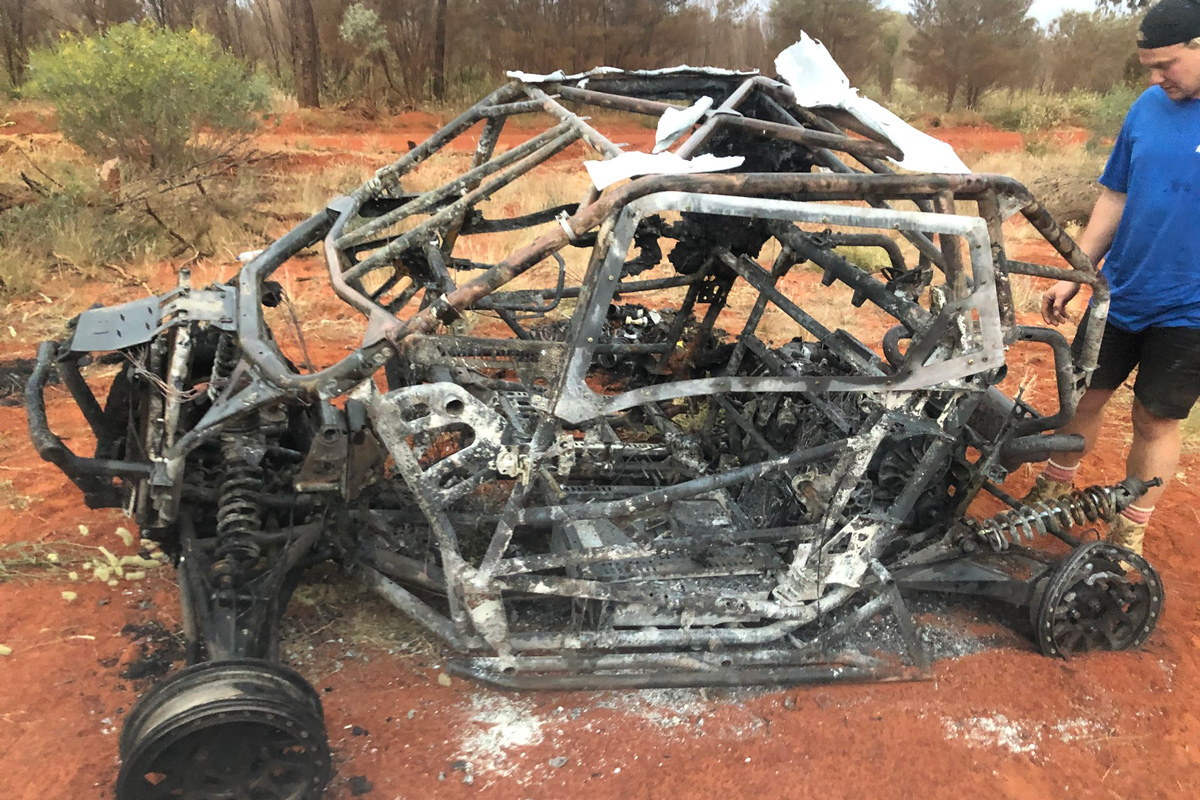 The aftermath of Simon Evans and Max O’Brien’s crash

Kincrome Racing’s Simon Evans and co-driver Max O’Brien have been given the all-clear after a frightening, fiery crash in their SXS Polaris ended their run early in the Tatts Finke Desert Race in the Northern Territory.

Evans was displaying some good early speed into the 226km opening leg from Alice Springs to Aputula when he was baulked by a slower competitor and sent spearing off course where his car finished on its side and subsequently caught fire.

Evans helped O’Brien from the car and then struggled to release himself as the flames took hold in what the seasoned veteran described as the “closest call” in his successful 30-year career.

Incredibly, the cage, chassis and suspension arms of the car have survived the inferno and will be sandblasted before the car is rebuilt over the next couple of months. 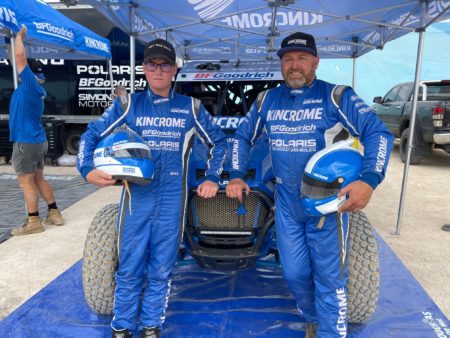 “I have had bigger crashes, but that is the closest call I have had in a race car,” said Evans.

“I managed to get Max out of the car, but then the fire really started to take a hold.

“I had to really calm myself down and think about what I was doing, because I was running out of time.

“I took a deep breath, closed my visor and then methodically worked my way out of the car.

“My helmet kept getting caught on the cage, but eventually I managed to get out and we just had to sit and watch as it burned to the ground.

“My wallet and phone and everything went up with it, so we will have to sort that out when we get home.

“I have some minor burns on my shoulder, but I am grateful that we both managed to get out relatively unscathed.

“Cars you can rebuild, with people it’s a little more difficult.

“The thing I will say is that we have learned a hell of a lot and will be putting that knowledge into the rebuild of the new car.

“We will also be relaying our experiences to the rule makers and maybe there will be some good out of this for everyone.

“I have to thank Kincome and all our sponsors for supporting us in our last-minute dash to Finke and for everyone’s concern after news of the fire started to filter through.

“With my phone melted into the desert, it might be a few days before I get to return everyone’s messages.”

Kincrome Racing was hoping for a fairytale ending to this weekend’s event after a last-minute COVID-19 rule change from the Northern Territory Government allowed them to travel from Victoria to the NT on Friday.

“It was like Christmas when we got the last-minute opportunity to be in the event, so to have our car not even make the start was gut wrenching,” said Jackson.

“We then moved into full support mode for Evo (dad, Simon) and had travelled ahead to Finke and were awaiting his arrival when we got the call to say he was stopped on course.

“We were hopeful that he would get going again, but then it was confirmed that the boys had crashed and a fire had all but destroyed the car. Thankfully they were okay.

“We then had the four or so hour drive back to Alice Springs before we could see them and find out exactly what happened.

“We have already started to talk about the rebuild and will start to get stuck into it as soon as we get home later in the week.”

Simon was driving an updated Polaris Pro XP two seater while Jackson was to campaign his four-seater Polaris.

Simon Evans will go to a spare car for the next rounds of the BFGoodrich Motorsport Australia Off-Road Championship at Loveday in South Australia on July 23-25 and the Kincrome SXS Championship at St Helens in Tasmania on August 7.