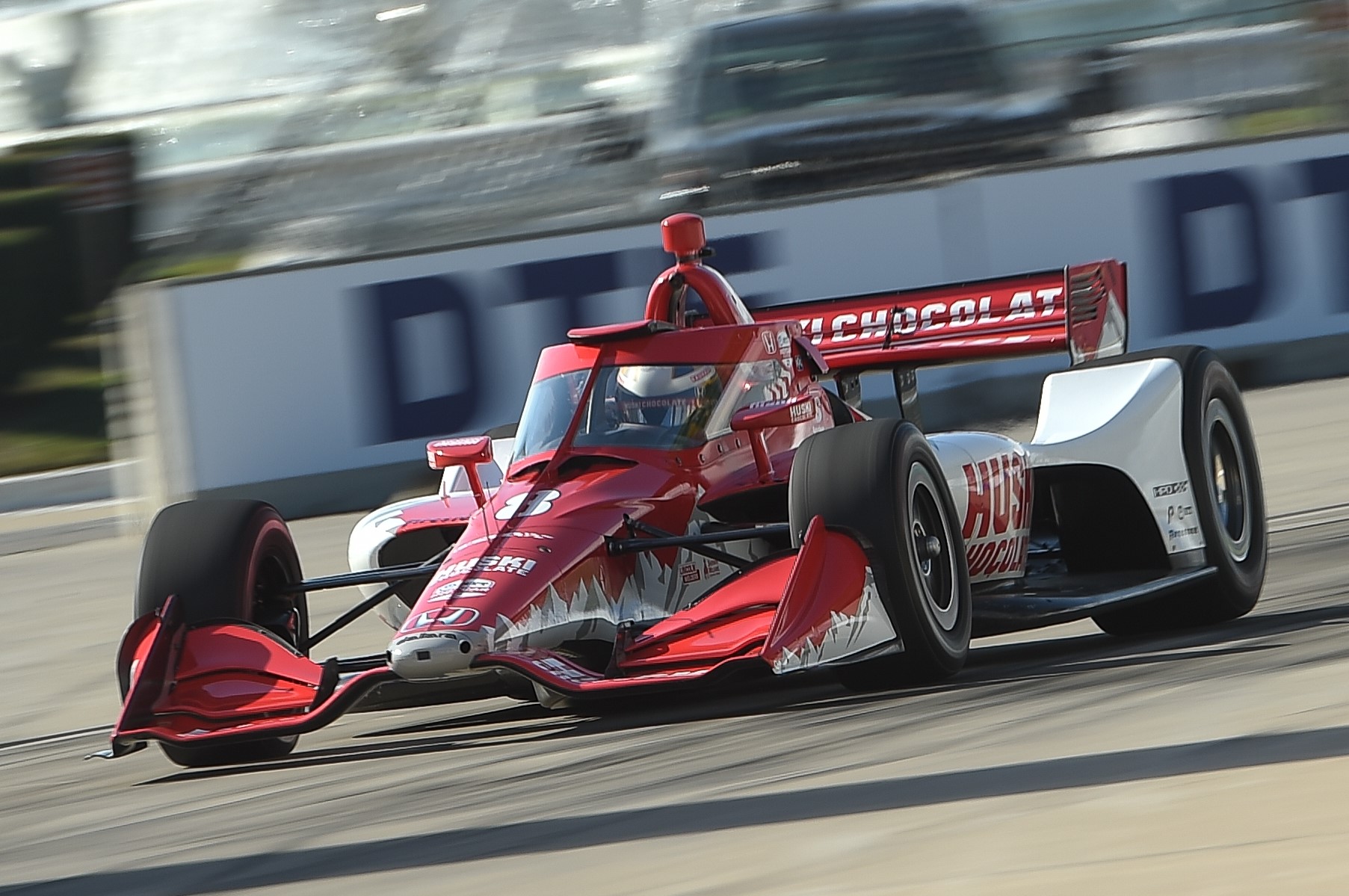 Chip Ganassi Racing’s Marcus Ericsson has snatched victory from Team Penske’s Will Power in a dramatic finish to the Dual in Detroit opener.

In a frenetic finish to the 70-lap race at the Belle Isle Street Circuit, the red flag was drawn after Romain Grosjean (Dale Coyne Racing w/Rick Ware Racing) crashed in the fountain section of the course.

Power held the lead as the red flag flew; however, as the race got set to restart, the 40-year-old was unable to fire up his car due to an ECU issue.

The field would duly leave pit lane without him, the Australian left sitting idle while his team worked on his car.

As a result, Ericsson inherited the lead and held off Ed Carpenter Racing’s Rinus VeeKay and pole-sitter Pato O’Ward of Arrow McLaren SP to claim his first win.

The Swede becomes the seventh different winner from seven races this season.

It ends a winless drought dating back to 2013 for Ericsson, whose last success came in the 2013 GP2 Series season at the Nurburgring.

“It’s been such a long time for me and it’s been tough,” said Ericsson.

“I don’t even remember, I was a kid when I won last time so yeah, I feel so good.”

It’s the second time Ericsson has found success on the streets of Detroit, his first IndyCar Series podium coming in 2019 with Schmidt Peterson Motorsports.
“I know coming here I had my best result here two years ago with my second place so I really liked this track then,” said Ericsson.

“So I knew coming into this weekend I had a lot of confidence but we had a bit of a disappointing qualifying.

“Good practice yesterday though so we knew we had a good race car and then for once things fell my way. It just feels really good

“The team has done a great job, Huski Chocolate and Honda, the engine was great all day. I’m proud of my engineer and everyone on the stand and in the pits, it’s a team effort.

“Also, for Will, I feel really bad for him, obviously the way it ended for him. He did a tremendous job but it was my day today and it was about time.

“I thought that for once luck was on my side, so I think that we deserve that.”

In what was a frenetic start to the race it was O’Ward who got the jump on fellow front row starter Alexander Rossi (Andretti Autosport) into Turn 1.

At the end of the first lap, O’Ward had a good lead over Rossi while ex-Formula 1 driver Grosjean (Dale Coyne Racing w/Rick Ware Racing) was third.

Scott Dixon (Chip Ganassi Racing), who coming into the seventh race of the season went to second equal with O’Ward after the Mexican claimed pole position, cracked the top 10 on Lap 2 with a pass on Sebastien Bourdais (AJ Foyt Racing).

Eighth placed Ryan Hunter-Reay (Andretti Autosport) was the first of those inside the top 10 to pit at the end of Lap 2, getting off of the softer compound tyre.

However, his hopes of challenging were scuppered after making contact with the wall on his out lap, resulting in a broken left rear toe link.

Scott McLaughlin (Team Penske), who qualified 23rd, was among those to pit early as well. He would suffer a slow stop though, dropping him off the tail of the field.

O’Ward pitted from the lead on Lap 3 while Herta and Newgarden came in one lap later.

The aforementioned pair came out of the pit lane line astern. As Herta sought to make his way by, Newgarden got loose out of Turn 3 and lost drive. The two-time series winner crawled back to the pit lane, losing his left rear wheel in the process.

While a handful of the front runners opted to pit, some chose to run long on the soft compound tyre, including Power.

He quickly usurped Jones who had found his way to the lead as those ahead of him pitted, while hard charger Takuma Sato (Rahal Letterman Lanigan Racing) made his way to third with a pass on Bourdais.

While most started on the soft compound tyre, Dixon went off strategy and opted to run long on the hard compound tyre in his first stint.

While those on the softer tyre faded, Dixon soon found his way to the lead on Lap 12.

Power pitted from second at the end of Lap 20 while Dixon carried on in front.

In the midst of the pit stop sequence, the yellow flag was drawn for a heavy crash involving Arrow McLaren SP driver Felix Rosenqvist at Turn 6.

Such was the impact of the crash that a concrete wall fell over and one of the tyre bundles nearly leapt the catch fencee.

The red flag was shown shortly thereafter to retrieve Rosenqvist as well as replace the concrete wall and tyre bundles.

Rosenqvist was taken to a nearby hospital while racing resumed over an hour after the race was halted.

Dixon was the first of those to come to the pit lane under the Safety Car. He was followed in by James Hinchcliffe, Santino Ferrucci, Rossi, Rahal, O’Ward, Herta, Palou, and Bourdais, who occupied second through to ninth.

With the field cleansed, it was Power who led Ericsson (Chip Ganassi Racing), who both pitted just moments prior to the first Safety Car period.

Having led the opening stint, Dixon fell to 11th as the race restarted with 39 laps to go.

On the softer compound tyre, Dixon passed McLaughlin, Daly, and Harvey, though his tyres would soon fade and he found himself battling.

A puncture on Lap 34 took Grosjean out of contention as he fell to the tail of the field.

Having ceded position to O’Ward and Pagenaud, Dixon pitted on Lap 43 for a set of hard compound tyres, followed in by Harvey, Herta, and Hinchcliffe.

Contact with the wall on Lap 51 would end McLaughlin’s hopes of a solid finish. He was forced to the pits with a broken left rear toe link, though he would return to the race several laps later.

Come Lap 53, Power was back in the lead with Ericsson and VeeKay in tow. Sato was a distant fourth while O’Ward was fifth.

Sato made which work of VeeKay with seven laps to go, but looked unlikely to threaten the leading pair who were five seconds up the road.

However, the race was to have its second major moment when Grosjean crashed in the fountain section.

The yellow flag flew but that soon turned red with five laps to go.

The field duly filed into the pit lane while Grosjean’s car was recovered.

After a brief intermission, the engines were fired up, all but race leader Power who failed to get his car going.

Despite desperate attempts to restart, Power was wheeled back to his pit box with an ECU issue.

Ericsson took the lead while Power lay idle in the pit lane. His car eventually fired, though the race was well underway by then.

With the lead in hand, Ericsson took the green flag with Sato in tow. However, a poor restart for the Japanese driver allowed O’Ward and VeeKay through.

Despite a strong charge from the young guns, the Swede would hold on to win.

Dixon would go on to recover to eighth while Jones and Newgarden completed the top 10.

Power would finish the race three laps down in 20th.

Results: Dual in Detroit I