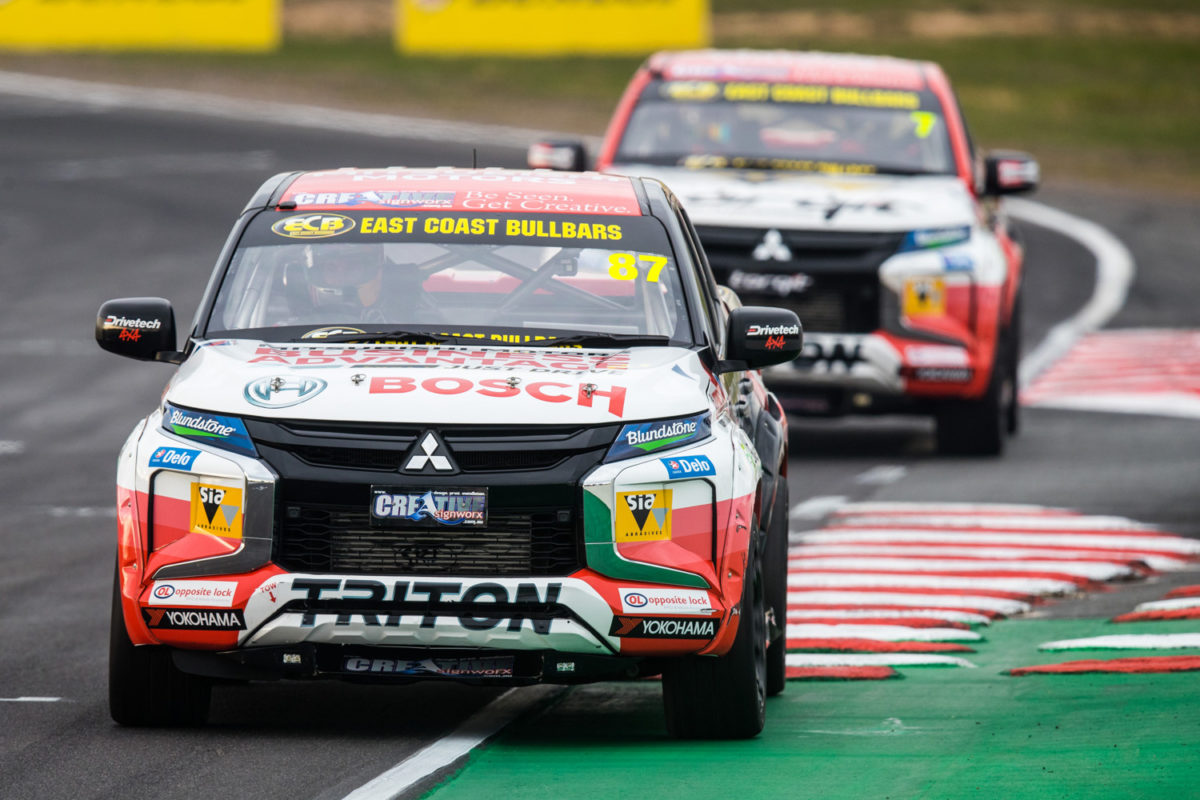 Toby Price races in SuperUtes in 2019

Toby Price is keen to race in the Haltech V8 SuperUte Series, having been a semi-regular during its diesel era.

Price picked up three race wins in the six rounds he contested across 2018 and 2019 in a Mitsubishi Triton run out of Sieders Racing Team, when his offroad programme with KTM allowed.

The two-time Dakar champion is excited by what he has heard about SuperUtes since the switch to V8s.

“Honestly, I would love to,” Price told Speedcafe.com about getting back into the category.

“To be a part of the series when it first kicked off and running the diesel engines, it would be super exciting and pretty cool to see where it’s gone to now having the V8s in them.

“It’s definitely something that’s on the cards to do and hopefully soon we might get a call-up and go for another run in SuperUtes and go from there.

“It’s cool to see, I heard good responses on it; people kind of enjoyed it a bit more now that there’s some noise and a bit of pace and it’s cool to see that people have turned on the bad influence of the whole thing and gone in that direction.

“I want to get back in one for sure.”

For now, Price is preparing for the Tatts Finke Desert Race, which he will contest in the cars category behind the wheel of a Mitsubishi Triton trophy truck.

While in the Northern Territory, however, he has also ridden his KTM offroad bike for the first time since crashing out of January’s Dakar Rally.

The 33-year-old’s renewal with the Austrian marque for two more years was announced earlier this week, and follows the defection of 2021 Dakar champion Kevin Benavides from Honda to KTM.

“Honestly, I hadn’t heard too much on it basically until a few days before it all went to air, but I’m excited,” said Price.

“It’s cool to see Kevin come across. He’s the number one guy at the moment so it will be cool to see his input and his thoughts on our bike compared to the competitor’s.

“We’ll welcome him in with open arms and we’re ready for it, we’ve got to do our own task and our own goals with it, and we’ll be ready for it for 2022.

“We need to get our third one [Dakar title] in our hands.”

The 26-year-old, who finished third with KTM on his Dakar debut this year, now rides for the factory team of sister marque GasGas.

Sanders is currently undertaking Rally Kazakhstan while Price’s Finke campaign, in which he is chasing a first win on four wheels after six on two wheels, starts with the prologue tomorrow.