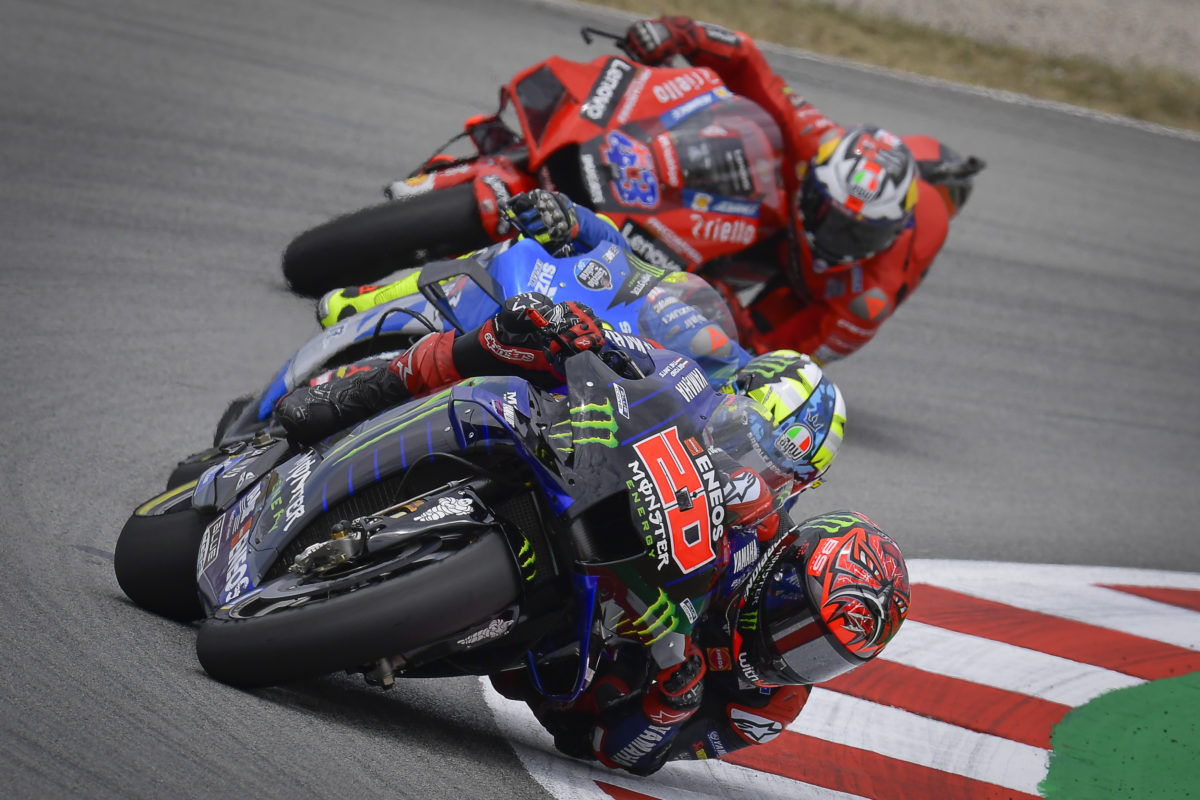 Fabio Quartararo has delivered a terse response to Casey Stoner’s call that he should have been black flagged for his bare-chested finish to the Catalan MotoGP.

Quartararo’s leathers opened for as yet unknown reasons with around four laps left at Barcelona, but the Monster Energy Yamaha was allowed to continue.

He took the chequered flag in third spot, at which time an existing three-second penalty for a shortcut caused him to drop to fourth.

Hours after the fact, stewards determined that the Frenchman had indeed breached MotoGP’s sporting regulations, namely the article which states, in part, “The [rider’s safety] equipment must be worn, correctly fastened, at all times during on-track activity.”

He was consequently handed another three-second penalty, which meant that #20 would finally be classified in sixth position.

A number of past or present riders opined that Quartararo should instead have been black flagged, if not for the initial issue with the leathers, then for the apparent tossing away of his chest protector on Lap 21.

Among the earliest to express such a view was Stoner, who tweeted about the incident shortly after the race.

“Whether or not it was @FabioQ20 taking his zipper down on purpose, I believe that should have been a black flag,” wrote the two-time premier class champion.

“At this level you can’t be allowed to race at 350km + with your leathers open.”

Whether or not it was @FabioQ20 taking his zipper down on purpose, I believe that should have been a black flag. At this level you can’t be allowed to race at 350km + with your leathers open.

Quartararo has now admitted that he should have been black flagged, having suggested shortly after the race that he had already been punished enough for the shortcut.

However, he was dismissive of Stoner’s commentary.

“He is at home and he likes to fish,” said the current championship leader on Sky Sport Italia at the post-race test.

“If it had happened to him 10 years ago, he surely would not have said anything.

“I don’t want to comment on any rider or people in particular, but I have seen the real face of some with whom I had a good relationship.”

Exactly what the latter element of that response is a reference to is not clear, although there are multiple reports suggesting that Ducati and Suzuki may have protested Quartararo’s result.

Suzuki rider Joan Mir asserted that the discarding of the chest protector was “super dangerous”, but claimed during the post-race test that he had not lobbied for a penalty nor asked his team to do so.

“A wrong image of me is emerging,” said the 2020 MotoGP champion.

“I did not say that Quartararo should be penalised for the open suit; it is clear that this was only risky for him.

“But if you take it afterwards, the chest protector, and you throw it, it is dangerous, yes; at that point you put the other riders in danger. If someone says otherwise, I throw it at them.

“But for sure, I have not asked to penalise him nor have I asked Suzuki to do so.”

Quartararo took to social media on Sunday night to seemingly vent his frustration at criticism from fellow riders and calls to be penalised, but now says it was not a message posted in anger.

“Congratulations to all the people that go to complain for another penalty,” he wrote on Instagram.

“I put nobody in danger, like a rider say[s], and it was already tough for me to ride.

“But great to see the real faces of some people. Just want to thank all the people that support me and help through difficult moments. See you in the next one.”

‘El Diablo’ has now explained that he was in fact amused by the drama.

“People talk a lot, I don’t want to mention names in particular, but this doesn’t make me angry, I think it’s funny,” he stated.

Consistent with that claim, Quartararo tweeted a photograph of himself straddling one of his Yamahas in a garage while completely topless, with the message, “Good test today! 79 laps done and luckly [sic] nobody saw me riding”.

How the race suit came to be unzipped remains the subject of conjecture.

Manufacturer Alpinestars reported that a preliminary investigation found it to be “in normal working order”, only for Quartararo’s crew chief, Diego Gubellini, to claim that his rider closed it properly before the race.

The Frenchman leads the championship by 14 points on the way to the Sachsenring for Round 8, the German Grand Prix, on June 18-20.