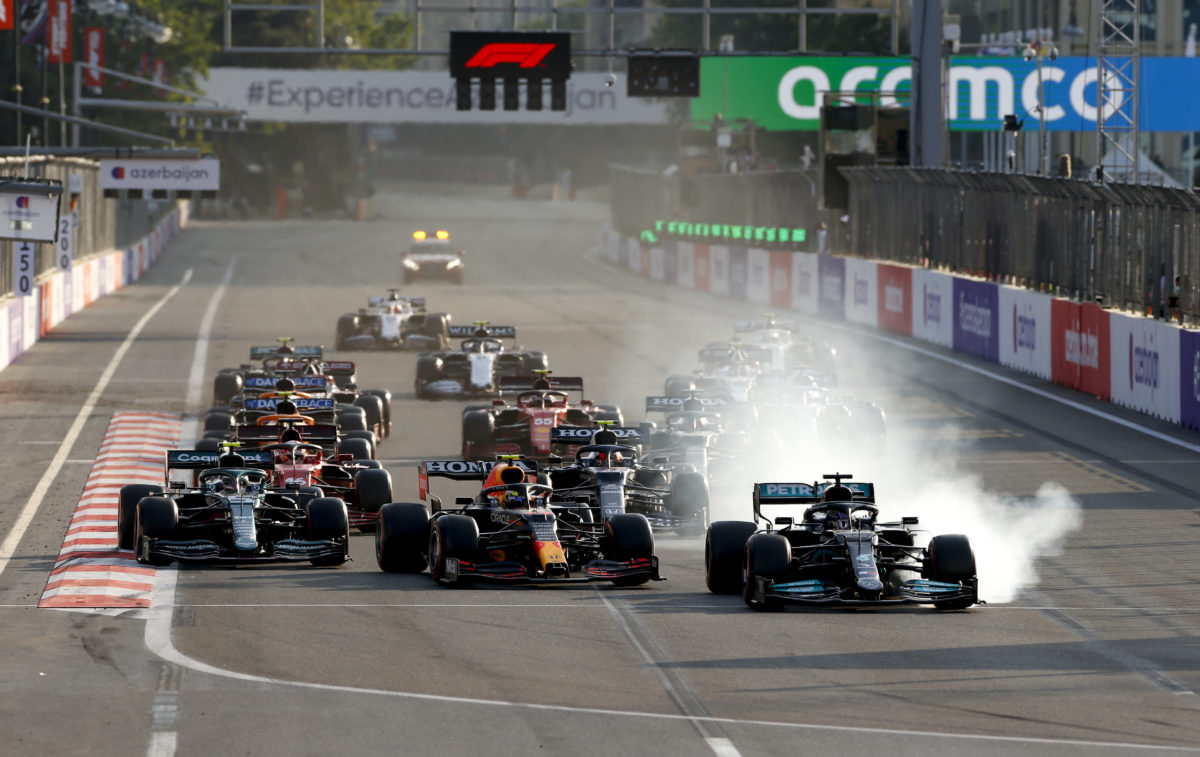 Lewis Hamilton locks up at the restart in Azerbaijan

Mercedes technology director, Mike Elliott, has shed light on why Lewis Hamilton locked up and slid out of contention of the Formula 1 Azerbaijan Grand Prix.

Hamilton had lined up second on the grid for the Lap 50 standing restart, surging into the lead on the run to the first corner.

However, a heavy lock up saw him skate into the apex, dropping him to the rear of the field.

“On the rears, it’s relatively easy, the drivers spin the wheels up and therefore they put surface temperature in that way.

“On the fronts the driver will weave, or he will put heat in from the brakes.

“So Lewis was trying to maximise the heat he’s pushing into the room from the brakes, and that caused them to get hot enough that they smoked.”

That in itself was not an issue, as once the race restarted the airflow from the car moving would have cooled them.

The cause of the 36-year-old’s mistake at the first corner was not related to the smoking brakes, and instead a result of a system Mercedes has put in place to reduce the workload on drivers at a race start.

“We’re not actually allowed to talk to the drivers, so we can’t talk them through the settings they need to change,” Elliott said.

“So as a result of that, we try and simplify things as much as we possibly can, we try and produce tools the drivers can use, that reduces the workload they have to go through because there’s a huge amount for them to do.

“One of the buttons we’ve got, what’s called brake magic – to be honest, I don’t know why we call it brake magic – is a button that the drivers can press and that allows them to get heat into the brakes.

“One of the big things it does is it moves the brake balance, so the proportion of the front brake energy to the rear brake energy all the way as far forward as we can get it.

However, it was soon after the restart that Hamilton made the mistake that saw him finish the race in 16th.

“He made a fantastic start, he got himself up alongside Perez, and as he and Perez were sort of shuffling position Lewis swerved,” Elliott said.

“In the process of swerving, he just clipped the magic button.

“Unfortunately, he didn’t feel he had done it, so he had completely no awareness he was going to have a problem.

“At the point he then braked, which was the normal point for him to brake, he was in a position where he got all of the brake balance shifted forward.

“As a consequence, they locked, and from that point, there was nothing he could do but go wide.”

Elliott added that Mercedes will now look at the ‘brake magic’ button and ways it can improve that system ahead of the French Grand Prix, which gets underway next weekend.