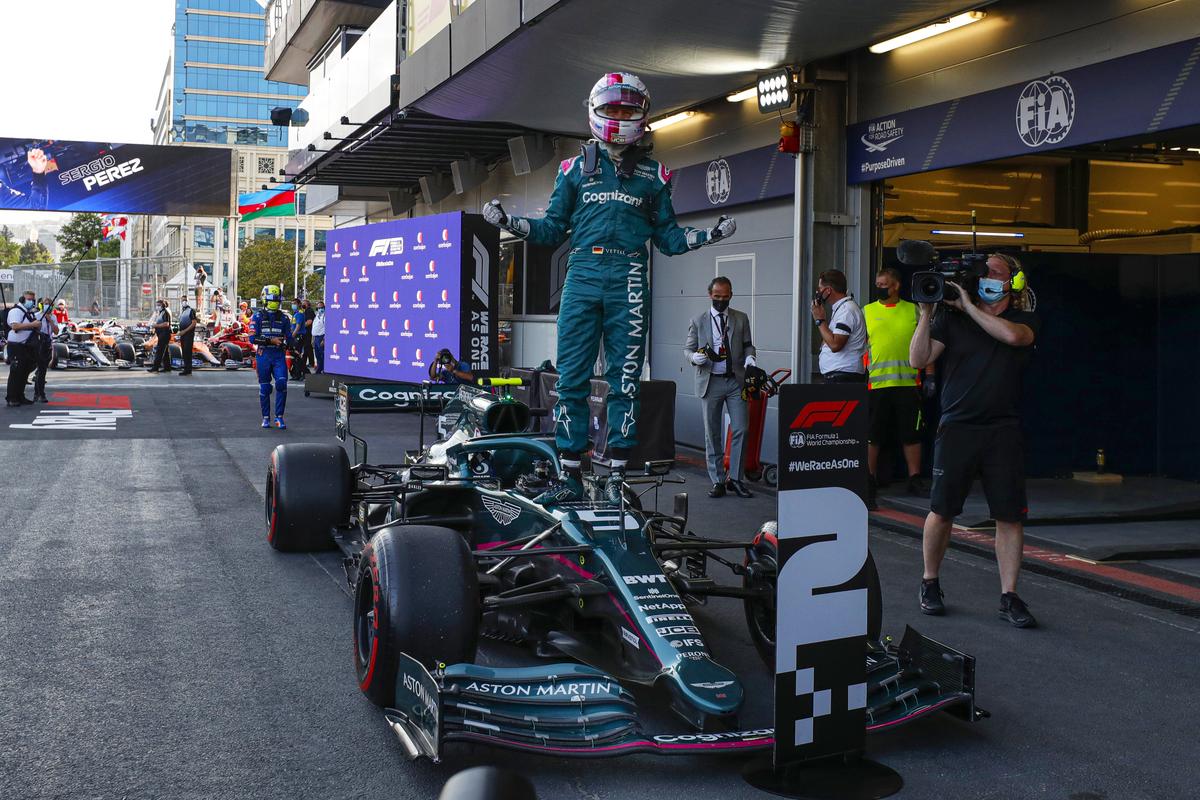 Sebastian Vettel’s second place finish in the Formula 1 Azerbaijan Grand Prix marked a high point for Aston Martin after a difficult start to the 2021 campaign.

The Silverstone-based squad had high expectations heading into the year after a strong performance last season, including victory for Sergio Perez at the Sakhir Grand Prix.

However, it has instead found itself battling just to score points, and finds itself well down on midfield rivals McLaren and Ferrari.

Even after Vettel’s podium in Baku, which contributed 18 points to the team’s tally, it remains sixth in the constructors’ standings, two points down on AlphaTauri, a far cry from battling for third in the 2020 teams’ competition.

“I think it’s great for us,” Vettel said of his Azerbaijan result.

“We had a very rough start to the season. We expected quite a bit more after such a strong year the team had last year.”

Vettel’s weekend started off slowly, qualifying outside the top 10 before racing his way forward.

Team-mate Lance Stroll found the wall in qualifying and started 19th, and he too was making strong strides forward before a tyre failure took him out of the race.

“I didn’t have many expectations, to be honest,” Vettel admitted post-race.

“I knew that the whole weekend I felt good, so I knew we can score some points but certainly didn’t expect second and the race was really strong.

“We had a very good first stint.

“I saved the tyres in the beginning and stayed out longer than most of the people in front of me, which I think helped us later.

“At the restart I had, when the Safety Car came, I was obviously in the mix in P6 and had tyres that were 10 laps fresher than everyone else’s.

“It helped me at the restart to jump Charles [Leclerc] and also Pierre [Gasly].

“It was quite hairy in Turn 3 and Charles was braver than I expected because I initially break later than him but he opened the brakes.

“I thought ‘okay for sure is going to hit the wall’, so I’m prepared to get to the inside, but he made it. I don’t know how but he did.

“After that, I still had a good feeling in the lap after the restart to get him at the end of the lap and jump in there.

“After that we went fourth and could really go with the pace you know from the group in the front.”

Vettel was also well placed at the red flag, inheriting third when Verstappen crashed out, which soon became second after Lewis Hamilton locked his brakes at Turn 1 at the restart.

“It’s a shame for Max to lose a lead like that.

“For us, obviously then we found ourselves in a good spot in the podium ranks, just two laps to go so you just tried to keep it together.

“I was again aggressive on the start and had a good start but nowhere to go.

“Then obviously saw that Lewis misjudged Turn 1 and try to stay a bit closer with Sergio [Perez] maybe to do something after the first lap, but I was too far away.”

It was also Aston Martin’s first world championship podium as a constructor, the marque having had a sporadic involvement in the 1950s before returning to the grid this season.

Paul Ricard hosts the next round of the world championship, the French Grand Prix set to run across the June 18-20 weekend.