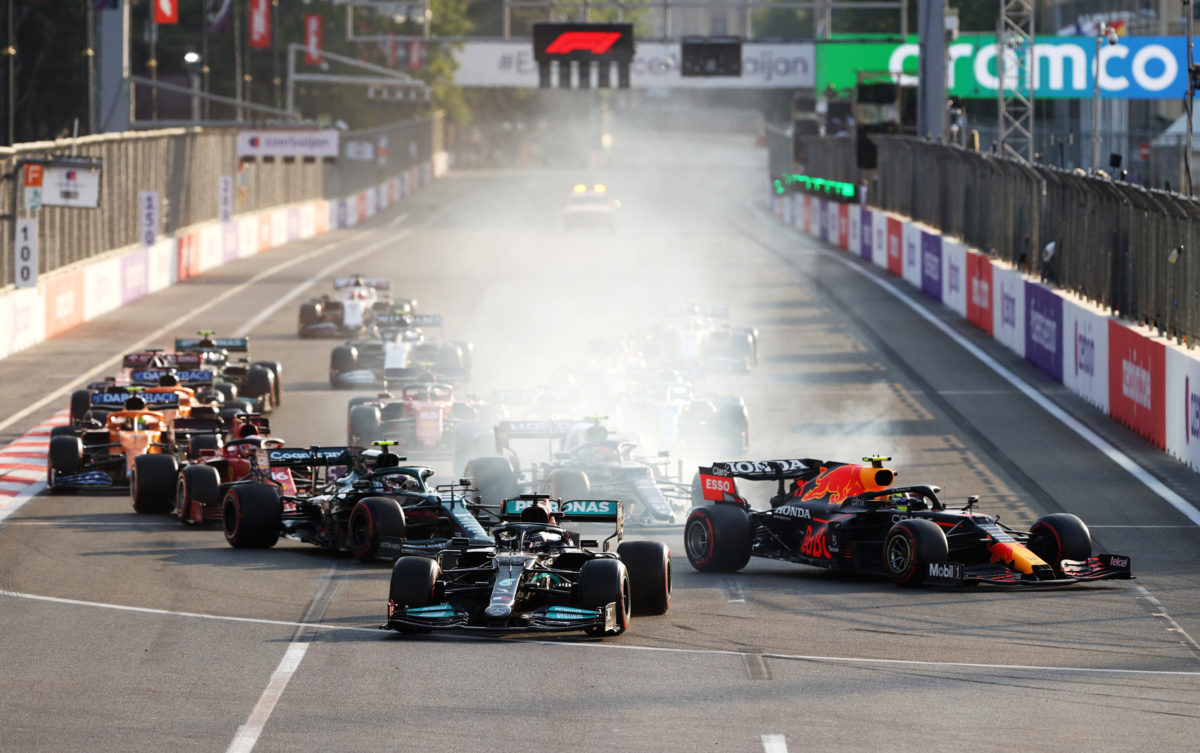 The red flag restart in Azerbaijan

Consensus among drivers has seen them support FIA Race Director Michael Masi’s call for a standing restart in the dying laps of the Formula 1 Azerbaijan Grand Prix.

A heavy crash in the closing stages for Max Verstappen saw the Safety Car deployed before the red flag was shown.

It left a two-lap sprint to the finish, with the cars lining up on the grid in race order for the run home.

Race control has the choice of whether to use either a rolling or standing restart, with the former used at the Emilia Romagna Grand Prix earlier in the season.

“I already know the Americans [Liberty Media] took over, so I wasn’t really surprised that we go first with the entertainment,” quipped Pierre Gasly when asked if he was happy with the standing restart.

“I was quite happy. You know, it always brings a bit more excitement. It creates some sort of adrenalin inside you.

“I knew there will be some opportunities because you start only for two laps, everybody’s a bit like lions out of the cage, and everybody goes for everything and try to make as many positions as they can in very short time.

“I didn’t see the replay of the last two laps, but I must say on my side was very intense. I really enjoyed it.

“If anything, hopefully in the future they’ll do the same.”

His view was shared by race-winner Sergio Perez, the man who arguably had the most to lose by the decision.

Leading the race at the stoppage, the Mexican lined up from pole position, only to be beaten off the line by Lewis Hamilton.

The Mercedes driver subsequently locked up at Turn 1 and skated off the road, opening the door back up for Perez to take victory.

“As long as we keep it consistent, going forwards, it certainly helps the fans to be sticking to the TV,” he suggested.

“I think they had the most enjoyable two laps of the race, and they certainly made it very hard for me.”

Something of a traditionalist, Sebastian Vettel was more reserved in his judgement.

The German has been a vocal critic of what he perceives to be gimmicks in the sport, notably the Sprint Qualifying format set to be introduced at the British Grand Prix in July.

The four-time world champion argues such initiatives are a band-aid solution to more deeply seeded issues.

“It depends on which side you are – not in which side of the grid, I think if you have a positive outcome and you make up positions, then you’re happy about it,” he opined.

“I hope that in the future, the races are more exciting.

“I think we just need to watch out that it doesn’t become too artificial and we don’t lose the roots of the sport.

“You fight very hard and Safety Cars, obviously, something sometimes you enjoy, and sometimes it destroys your race, but the main thing is obviously that the Safety Car comes when it’s really necessary.

“In those two cases [Verstappen and Lance Stroll] we don’t even need to argue.

“I was wondering a little bit why it took so long for this second time, when Max had the shunt, for the Safety Car to come out because it was quite clear that he’s standing in the middle of the track.”

McLaren boss Andreas Seidl was more positive in his assessment of the decision.

“To be honest, it’s the right move, also, in terms of the show,” he said when asked by Speedcafe.com if he was happy with the standing start.

“There’s nothing wrong with a standing restart, because there’s no difference to do it at this point of a race or at the beginning.

“Again, we have to separate what happened with the tyres, we need to wait also [for] what the analysis of what the reason was for the tyre failures.

“With everyone changing tyres anyway, I also don’t see any safety risk.”