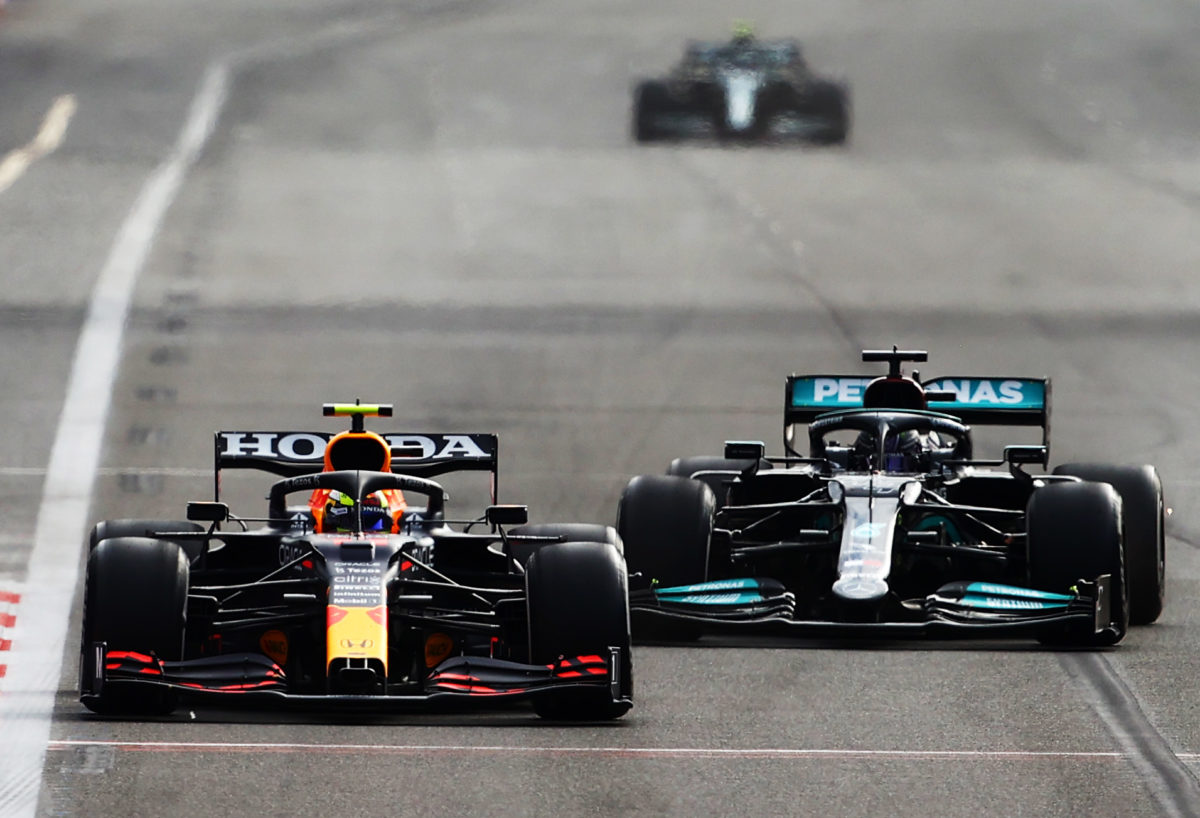 Sergio Perez has won a bittersweet Formula 1 Azerbaijan Grand Prix for Red Bull after Max Verstappen crashed out of the lead in the closing stages.

The Mexican headed Sebastian Vettel and Pierre Gasly in a race that saw Lewis Hamilton skate out of the points following a standing restart on the penultimate lap.

It was a dramatic finale with a red flag with three laps remaining as Verstappen suffered a tyre failure, before a rare mistake from Hamilton all but cancelled that out his championship rival’s misfortune.

At the race start, Charles Leclerc led the field into the opening turn from Hamilton and Verstappen.

In the field, the two McLaren’s found themselves together after Lando Norris slipped down the order in the run to the first corner after he was boxed out.

Perez moved up well, rising to fourth in the opening exchanges at the expense of Gasly.

Daniel Ricciardo put a move on his team-mate at Turn 2 as they started the second lap to claim 12th place.

Norris returned serve soon after, reclaiming the spot in the run to Turn 3.

Hamilton swept into the race lead as they completed Lap 2, using the slipstream to make the move stick well before they reached Turn 1.

With the advantage of DRS, Verstappen looked to pass Leclerc for second a lap later but wasn’t able to make the move stick.

The Dutchman found himself stuck behind the Ferrari, which in turn was stuck behind Hamilton as the front three found themselves split by less than a second.

Verstappen finally made the move stick on Lap 6, using DRS to cruise by the pole sitter.

A lap later, Perez demoted Leclerc another spot with a near identical move to that of his team-mate.

Norris and Fernando Alonso both stopped on Lap 7, the McLaren driver looking to undercut Bottas behind whom he’d been stuck in the opening laps.

Once Verstappen had moved in to second, Hamilton lifted his pace in an effort to remain outside of DRS range.

The Mercedes driver was successful, edging away to a 1.2s advantage at the head of the race.

After nine laps, Leclerc took to the lane from fourth, rejoining behind Lance Stroll in 10th.

Verstappen had slowly reeled Hamilton in, reducing the gap such that he found himself within DRS range as they completed Lap 10.

Just a lap later, the Red Bull driver took the lead after Hamilton stopped, a sluggish stationary time of 4.6s a result of having to wait for Gasly.

Verstappen put the hammer down before pitting next time around, handing the lead to Perez and returning to the fray in third place.

Rather than leaving Perez out on track, Red Bull hauled the leader in.

It was a 4.3s stop and saw him return to the race narrowly ahead of Hamilton in an effective second place as Sebastian Vettel lead the race.

The Mercedes driver latched on to the rear of the Red Bull, but was unable to mount a serious challenge despite running at fastest lap pace.

Vettel stopped after 18 laps, handing the lead back to Verstappen to slip back into seventh.

Behind the leaders, Gasly had climbed to a net fourth place – fifth on track behind Lance Stroll, the only runner yet to stop after 23 laps.

Hamilton began to lose touch with Perez around the same time, slipping out of DRS range before matching the leader’s pace to stabilise the gap.

A crash for Stroll triggered the Safety Car, the Aston Martin coming to a halt on the long front straight.

The Canadian suffered a left-rear tyre failure and was speared hard left into the concrete wall, though he was able to climb free and walk away.

The pit lane was closed, Stroll’s car having come to a rest just at its opening.

He’d been the only driver on track not to have stopped, his hard compound tyres 30 laps old.

When the pit lane opened, a number of runners down the order rolled the dice; Alonso, Antonio Giovinazzi, George Russell, and Mick Schumacher all stopping for fresh tyres.

The Safety Car was withdrawn at the end of Lap 35, Verstappen keeping the pace low until the last possible moment.

It bunched the field, the race leader accelerating away as he reached pit entry.

Perez was forced to defend from Hamilton while Leclerc locked up and narrowly avoided the rear of Vettel at Turn 3.

The German had stormed forward at the restart, passing the Ferrari at Turn 1 and then Gasly on the drag down the front straight at the end of the lap.

Verstappen quickly established a two second lead, with Perez also just edging away to move out of DRS range of Hamilton behind.

On Lap 39, the Mercedes driver found himself close enough to pick up DRS, ducking out at Turn 1 but was too far back to offer any serious threat.

Though that attack failed, Hamilton remained a threat and remained locked on to the gearbox of the second placed Red Bull.

Verstappen then crashed out of the race on the main straight in similar fashion to that of Stroll earlier in the race.

The Dutchman suffered a tyre failure, the left rear crying enough to eliminate him out from a race he had under control.

It left Perez in the lead from Hamilton and Vettel as the Safety Car was deployed on Lap 47 of 51.

With the front straight blocked, the field came through the pit lane as marshals worked to clear the debris strewn across the race track.

Under the break, Perez had a set of soft tyres fitted to his car ahead of the standing restart while Hamilton had no choice but to fit hards, his tyre bank otherwise exhausted.

The race restarted on Lap 50, Hamilton taking the lead only to lock up and shoot into the escape road, his brakes having been smoking heavily on the grid.

Perez reclaimed the lead as a consequence with Vettel second and Gasly third.

Hamilton dropped to 16th and last of the runners left in the race and, crucially, out of the points.

As the field began its final lap, Leclerc and Gasly squabbled over the final podium place, with Norris waiting in the wings.

Perez had cleared out in the lead, with Vettel comfortable in second.

Gasly was able to see off the Ferrari driver’s advances, Leclerc hanging on to fourth from Norris with Alonso, Tsunoda, Sainz, Ricciardo, and Kimi Raikkonen rounding out the points positions.

Having crossed the line, Perez was told to stop the car, the Mexican hitching a ride back to the pits with the medical car for his second grand prix win.