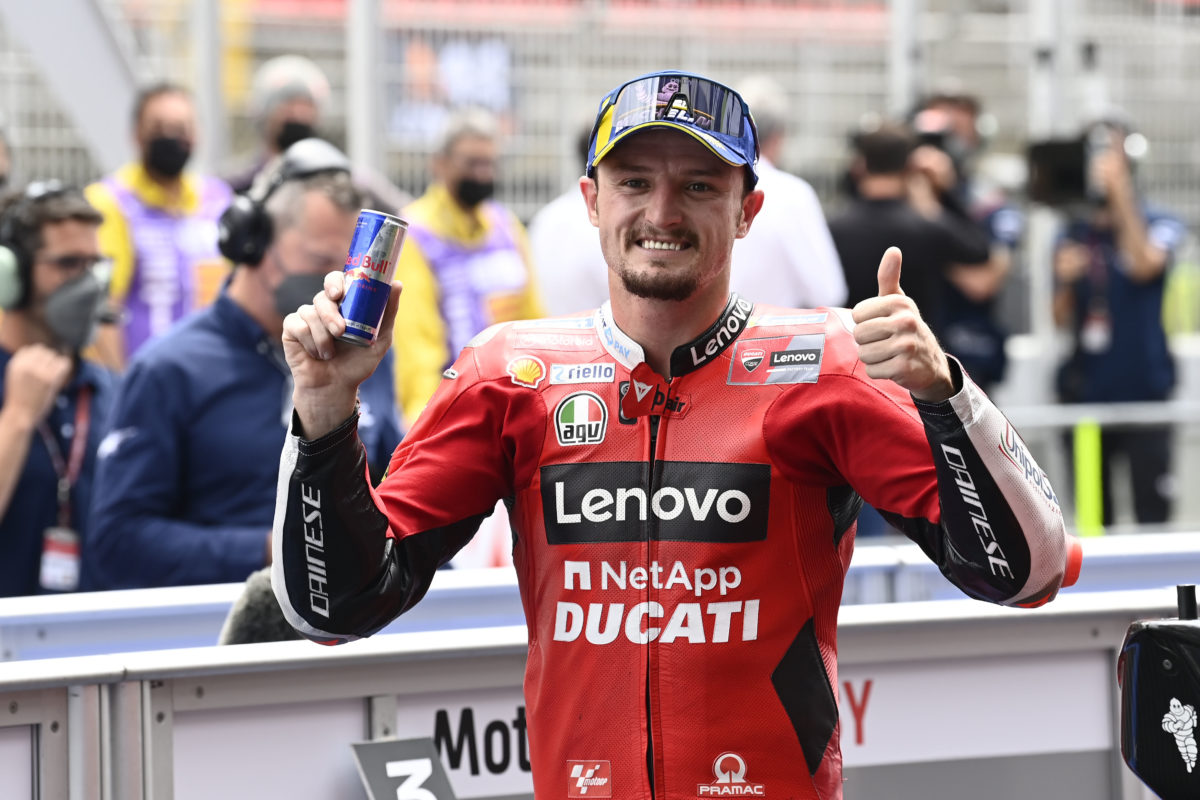 Jack Miller has hailed a first Barcelona podium, which helped him move up a spot in the MotoGP championship, as a “really good” day.

The Queenslander took the chequered flag in fourth, one position behind Fabio Quartararo, but was officially classified third due to the championship leading Yamaha rider’s penalty for shortcutting the circuit.

Miller also moved from fourth to third in the title race at the expense of Ducati Lenovo team-mate Francesco Bagnaia, who got home in seventh in Catalunya.

Having won the Spanish and Italian Grands Prix, #43 now has three podiums in the last four races, a run which he likened to his consecutive second placings at the end of 2020.

“So, that was a good day for me,” wrote Miller in his post-round column.

“First time on the podium here in Barcelona, I gained a place in the championship to be third now, and I kept my good run going. Definitely no complaints here.”

He added, “that’s three podiums now in four races, and I feel like I’m in a good groove. It’s the same feeling I had back at the end of last year.

“I’m in a good rhythm, I feel comfortable on the bike and I’m able to be there or thereabouts on Sundays. It’s only getting better week by week.”

The 26-year-old, who escaped unharmed when he crashed in qualifying, declared that he executed his plan for the race “nearly” perfectly.

He led initially and was circulating in second place before a missed gear on Lap 6 cost him two spots and made for a challenge in managing his front tyre temperature in dirty air.

Miller made one unsuccessful attempt at passing Quartararo on the road in the dying stages, but had seen the Frenchman’s off-track excursion and knew a penalty was coming anyway.

“I hung in there and it looked like fourth was the best I could do, but then I had something go my way when Fabio went off the track at the first corner and re-joined,” he recounted.

“I knew he’d have to drop a second for re-joining the track so I just made sure I stayed right behind him on that last lap.

“We all know the rules with this corner, so I wasn’t really surprised when they pulled me into parc ferme for the podium even though I’d crossed the line fourth.

“Nobody wants to get a podium this way, you’d prefer to finish inside the top three on the track itself, but the rules are the rules and I knew that if I stayed where I was, I’d be going up to the podium.

“That wasn’t a surprise – to be honest, the really surprising bit was how steep the stairs were getting up there, because I’ve never been up them before!”

There was a further bonus for Miller, among others, when Quartararo was issued another three-second penalty after the race for his leathers becoming unzipped.

The sanction relegated #20 from fourth to sixth, representing a loss of three championship points.

The post-race test at the Circuit de Barcelona-Catalunya has just got underway.