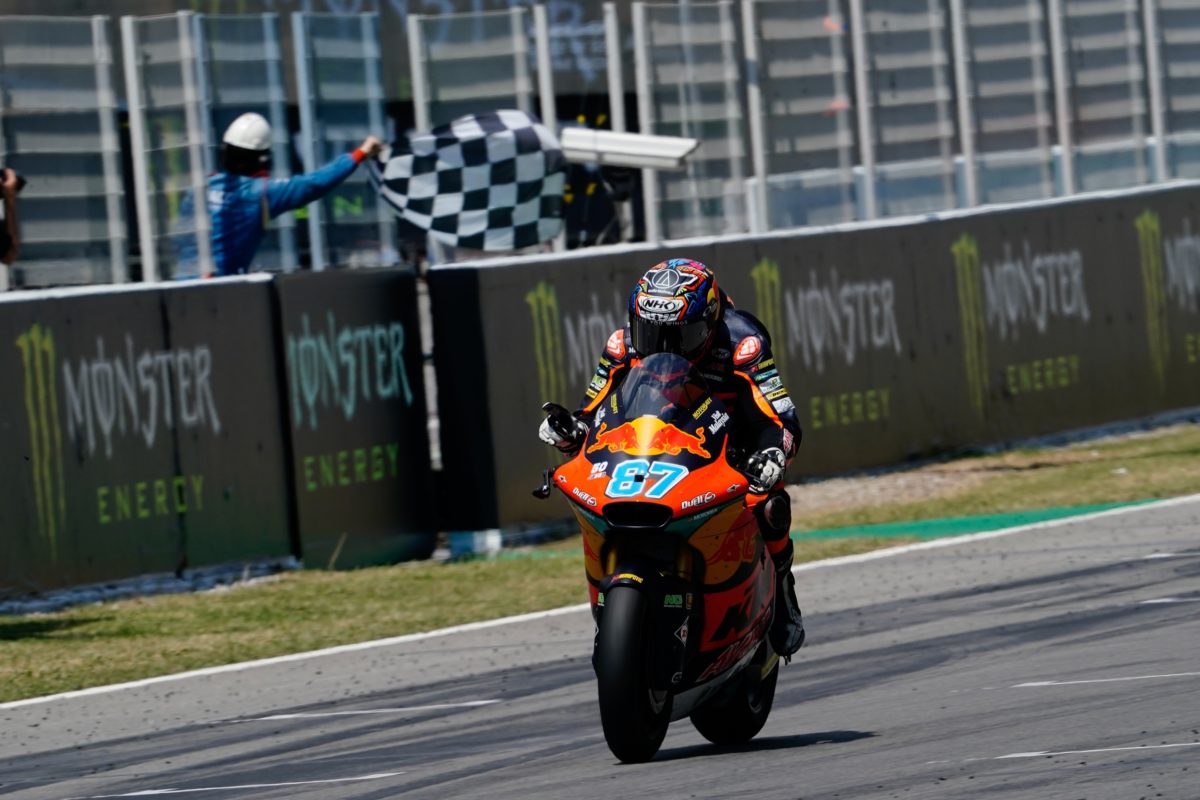 Remy Gardner “couldn’t be happier” after securing a second Moto2 race win in a row, this time in Barcelona.

Gardner’s latest victory came seven days after his first of the season, and four days after KTM confirmed he is on his way to the premier class next year.

Back at Mugello on the weekend prior, the Australian tailed Red Bull KTM Ajo team-mate Raul Fernandez before going down the inside of the grip-compromised Spaniard on the final lap.

The triumph in Catalunya was somewhat similar because, while Gardner started from pole and led initially, he spent eight laps just behind Fernandez and then dived past with three to go.

As the second-generation rider explained, it was once again a case of biding his time.

“In the beginning, I tried to break away, but obviously I didn’t want to burn up the rear tyre, so I was just trying to be smooth and not spin it up,” he said.

“I thought, ‘If I can break away doing that, perfect,’ but I saw there was half a second [margin] that whole time.

“I didn’t know who was behind but Raul made a push and I thought, ‘Alright, I’ll follow you.’

“He wasn’t pulling away, and [I] just sat behind, managing the tyres the whole time, and I knew I had a little bit more on him, I had half the race to study him, and I said to myself, ‘Alright, two laps to the end, I’m going to pass him and just go for it.’

“I saw the opportunity in Turn 1 and went, ‘Alright, let’s do it,’ and put the hammer down and pulled away.

“So, couldn’t be happier, honestly; it’s another 25 points.”

The result was KTM Ajo’s third straight one-two, and its riders occupy the same positions in the championship, with Gardner now 11 points up on Fernandez.

In Moto3, GasGas Aspar’s Sergio Garcia took victory in a race in which the top 10 took the chequered flag within a second of each other.

KTM Ajo’s Pedro Acosta holds a 39-point championship lead after finishing seventh, while KTM Tech3’s Ayumi Sasaki is under observation in hospital after suffering concussion in a last-lap crash.

Sasaki went down at Turn 8 and left the Leopard duo of Dennis Foggia and Xavier Artigas with nowhere to go, with all three tumbling.

Round 8 takes place at Germany’s Sachsenring on June 18-20.