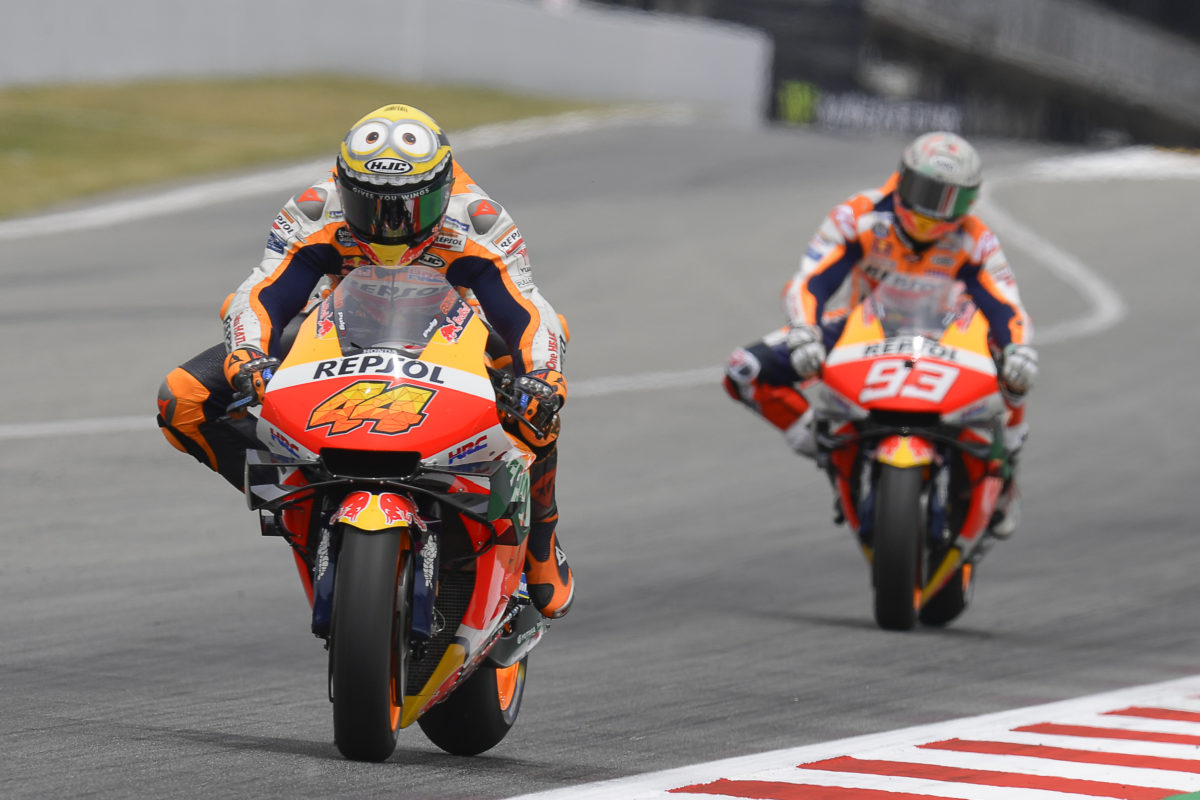 MotoGP operates a formal concession system whereby manufacturers are granted greater development and technical freedoms, including extra engines, until such time that their results reach a particular threshold.

Furthermore, race riders are allowed to partake in private tests, meaning Marc Marquez and Espargaro would be allowed to cut more miles outside of grand prix weekends.

The latter arrived at Repsol Honda this year after four seasons with KTM, which lost concessions after picking up its first three wins ever in the premier class in 2020.

In 2021, no Honda rider has finished higher than the fourth which Takaaki Nakagami, from satellite team LCR, claimed at Jerez.

The formerly dominant marque saw only Espargaro make Qualifying 2 at this weekend’s Catalan MotoGP, and even then, he had to come through Q1 to do so.

Furthermore, the six-time MotoGP podium finisher ended up 12th of the 12 who got into the latter 15-minute session, during which he crashed in the final stages.

“I’m not ashamed, honestly, and I don’t think Honda should be ashamed to think about concessions,” said Espargaro.

“We are in the elite [level] of motorcycling and everybody invests a lot of money here, and no matter how much you invest, you don’t get better results.

“That’s racing. I’m not ashamed to make concessions and, if I have to be honest, right now we need them.

“Because we don’t have test days, I have only done five this season, which is nothing.

“The bike is not at the level we would like it to be, and next year we will have the same [number of] testing days.

“So, we will be in the same situation we are in now.

“Of course, the concessions would be very useful for us. I’ve been in this situation before to turn it around and be where we need to be.”

Whether or not a manufacturer enjoys concessions is determined by a points system.

They are lost when the threshold of six points is hit, with three being awarded for a win, two for a second placing, and one for a third placing.

Those points last for two years and Honda has four from 2020, courtesy of Alex Marquez’s runner-up finishes at Le Mans and the first Aragon round.

As such, it would miss out on concessions if it achieves at least another second placing, or two third placings, this season.

Marc Marquez, who qualified 13th this weekend in Barcelona for his fifth race back from injury, thinks that will be the case.

“I mean, I wish that we don’t have the concessions because that means we will have a podium and maybe a victory,” said the six-time premier class champion.

“But anyway, now of course we’re in a difficult moment and everything we can have for the future, some advantage, will be nice for us.

“But I don’t think that we will get the concessions.

“Honestly speaking, I think we will get a podium before the end of the year.”

Thus far in 2021, Yamaha has four wins and five poles, while Ducati has the other two wins and two poles.

It is in fact Yamaha’s Fabio Quartararo who has now racked up five poles in a row, with the championship leader to be joined on the front row tonight by Ducati pilots Jack Miller and Johann Zarco.

Ironically, Marc Marquez was bumped from progressing to the second phase of qualifying by none other than Pol Espargaro, who was following his team-mate as #93 followed Miller in the latter stages of Q1.